Today’s guest post comes from Deborah via our friend Doug (originally posted on his blog here) The re-post was inspired by our travelling cats posts as Doug shared this story with us from it.

This is a pretty good story about my cats.

I was going to Paris to help a friend (Ralph). Of course the cats were coming with.

So I booked passage on the Queen Mary and made reservations in the QM kennel for the cats.  After my non-refundable passage was paid for, the cats got bumped by a dog — undoubtedly a dog accompanying a first class customer is my surmise.  I did check out the kennel while onboard, and ALL the occupants were canines.  The kennel master obviously discriminated against felines because according to him the kennel was fully booked for eternity.

Anyway, I was in a pickle.  How to get the cats to France?  Fly them as unaccompanied cargo was the only choice. But they would have to leave eight days after me because I would be on the Atlantic Ocean for that long.

My son was the hero who got them the necessary paperwork, retrofitted the cages to meet airline requirements, and delivered them to Logan airport in the middle of the night for their flight to Paris.  The paperwork was a nightmare requiring the State vet to certify their health exam which had to be done by a special state certified vet within 48 hours of the flight and that certification can only be done via the post.  To say timing was tight is an understatement.  Also the airline could refuse them for any reason (even with reservations) and the temperature at departure and arrival had to both be within certain ranges.  BTW, it is lucky they were not Persians because Persians are on the no fly list along with Himalayans.  Bombays are also “pug faced” but apparently they still fly under the radar so to speak.

Anyway, they flew on a Saturday and presumably arrived on a Sunday morning.  (They don’t have cell phones yet.). I went to the Air France counter at Charles De Gaulle airport and after being sent hither and yon was finally informed that they would be at a cargo center several kilometers away if in fact they had been on the plane.  Cats do not make the manifest list.

None of the taxis wanted to take me there because they preferred the much more lucrative fare into Paris.  An Air France employee finally tipped me off to say I was going to Paris but making a “short stop” on the way.

The “short stop” will be one of the punch lines of this tale.

A very nice taxi driver of African origin finally agreed to take me.  When we got to the cargo area everything seemed to be closed: it was Sunday after all and the French take Sunday very seriously.  We knocked on doors, drove to any building where there were signs if life, were sent hither and yon yet again until after an hour or so, we located someone who knew where the cats were.  But of course!  Their paperwork had to be stamped by some official and an import fee paid.  We were dispatched to another building (that was closed) and so started yet another hunt for the mysterious official.  Another hour or two later I had the stamped documents in hand and my purse was lightened of a few hundred euros.  Meanwhile the taxi meter had rolled over and was starting its climb toward 999 again. 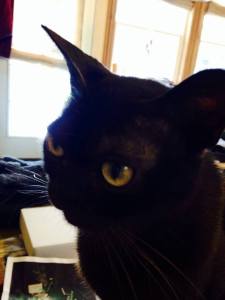 I took the papers back to the man who knew where the cats were and he reluctantly got up from his card game.  Obviously not that many cats get imported on Sundays.  He fetched the three carriers on his warehouse truck and I finally heard the cries if my kids. 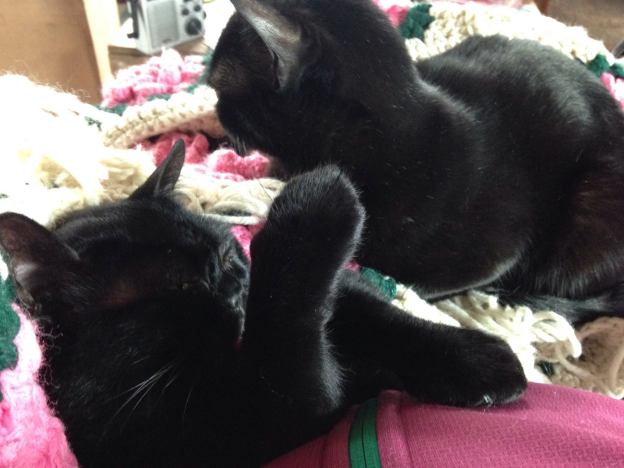 The taxi driver seemed invested in their welfare at this point and carried two of the carriers to his taxi.  We finally got on the road and arrived in Paris about eight hours after I had left for the airport.  The question in my mind was: how much is this going to cost?  I had reason to worry: a sleight of hand ATM artist had tricked me into believing the bank ATM had eaten my only two cards the day before and that I would have to get them from the bank when it reopened on Monday.  Meanwhile, he and his gang were busy making charges all over Corsica — but that is a story for another day.  The result was that I only had the cash I already had on hand for the weekend and the import fee (which is not stated anywhere) had made a serious dent in that.  The taxi driver had me basically empty my wallet — a couple of hundred euros –as payment for his several hours on the great cat mystery tour through the warren of the CDG cargo area.  I would have gladly paid him more if I had been able to do so.

You would think that standing on the sidewalk in front of Ralph’s place on the beautiful rue de la Montagne Sainte Genviéve finally reunited with my kids would be the happy end of the tale, but no, there is more.

I relayed the three carriers into the building and decided the safest thing to do was send them up in the elevator together since I could only carry two at a time up the five flights of stairs.  So I stacked them into the very tiny corner elevator — no room for me — pressed the 5th floor and raced up the stairs.  When I got to the top I heard a banging sound coming from the elevator.  I raced back down and found that the inside elevator door was banging against a carrier and couldn’t close.  Meanwhile the outside door was locked as the elevator was presumed occupied.  The cats could not rearrange their carriers, smart though they be.

So my friend had to call the Otis elevator repair person on a Sunday.  The dispatcher asked if there was anyone trapped inside the elevator — obviously those cases get first priority.  My friend replied that there were three cats but no people.  “Trois chats, Monsieur?  Vous avez dites trois chats?  Seulement trois chats?  Mais dis donc!  Ça c’est un peu incroyable!”   [“Three cats, sir? You say three cats? Only three cats? But tell me! That’s just amazing!]”The dispatcher was obviously a little incredulous.

Meanwhile, the cats were obviously distressed by the banging door constantly hitting the carriers as evidenced by their cries.  Another tenant in the building who wanted to use the elevator for his suitcases treated me to a refresher course in French swear words.  After a wait of an hour or so, the repairman appeared and quickly solved the problem.  Then he helped me carry the cats up the five flights of stairs.  Chivalry is not dead.  Fortunately he did not ask for payment for the rescue on the spot.

I opened the carriers and out came Charles, André, and Serena, a little the worse for the wear, but basically fine.  What’s for lunch, they asked in unison.  Why paté of course.  Actually the French make a very gourmet wet cat food that has identifiable bits of seafood in a tasty sauce that all three of them loved.

And that was the start of our French adventure.  It actually got much easier after this rather bumpy start: the French allow cats on trains for a mere 5 euros, I found a fantastic rolling carrier with mesh windows that was roomy enough for all three to travel in together, and Charles joined me for lunch at The Brasserie on the Isle Saint Louis several times — cats are welcome in French restaurants! [My emphasis! Doug] 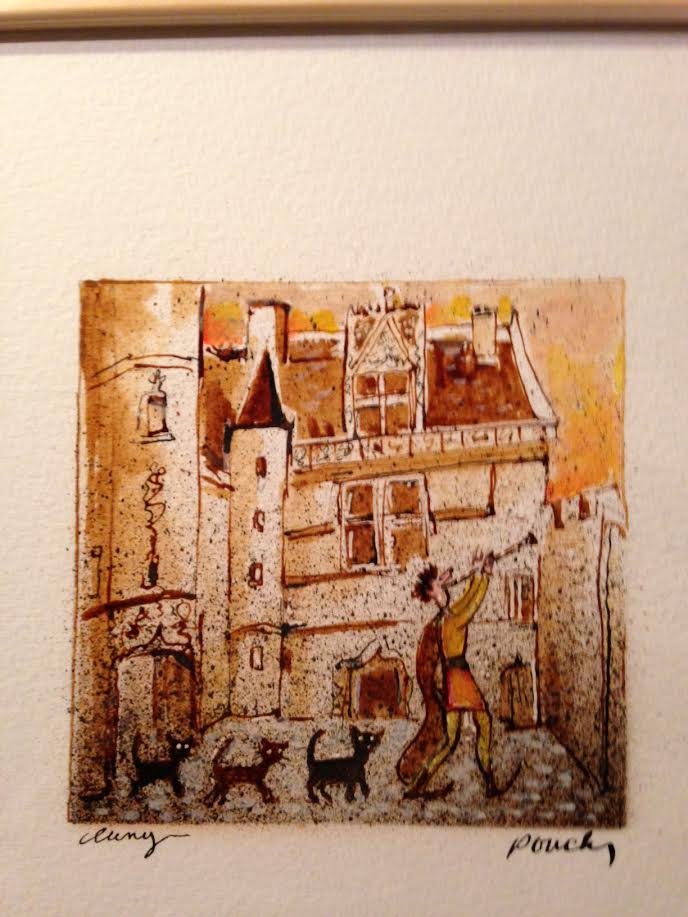 I purchased this painting in a tiny shop nearby — two black cats and a sable cat at Cluny, the medieval cloister also nearby.  The artist, Pouchelon aka Pouch, was an illustrator for Le Monde.  Most of his paintings feature cats!  He obviously anticipated the arrival of my two black kids and my sable kid.  Even the proportions are perfect: hefty Charles in the lead, wiry André in the middle and dainty Serena bringing up the rear.

We hope you enjoyed their story and don’t forget to subscribe to our Newsletter!

Thanks for subscribing! Please check your email for further instructions.
Visit our Shop for top quality cat toys and cat lover products!

We regularly write about all things relating to cats on our Blog Katzenworld! My partner and I are owned by four cheeky cats that get up to all kind of mischief that of course, you'll also be able to find out more about on our Blog If you are interested in joining us by becoming a regular contributor/guest author do drop me a message.

11 thoughts on “Guest Star: The Bombay Cats that flew from the US to Paris”

Follow Us
Sign up via Wordpress
Subscribe to our Newsletter
Locate posts by Category
Archives
Katzenworld Shop
Check out the amazing Tonies Audio Box! Great fun for children and adults that love classic audiobooks, Disnet stories and songs and want to listen to them in a fun way! Free delivery in the UK. International postage available.