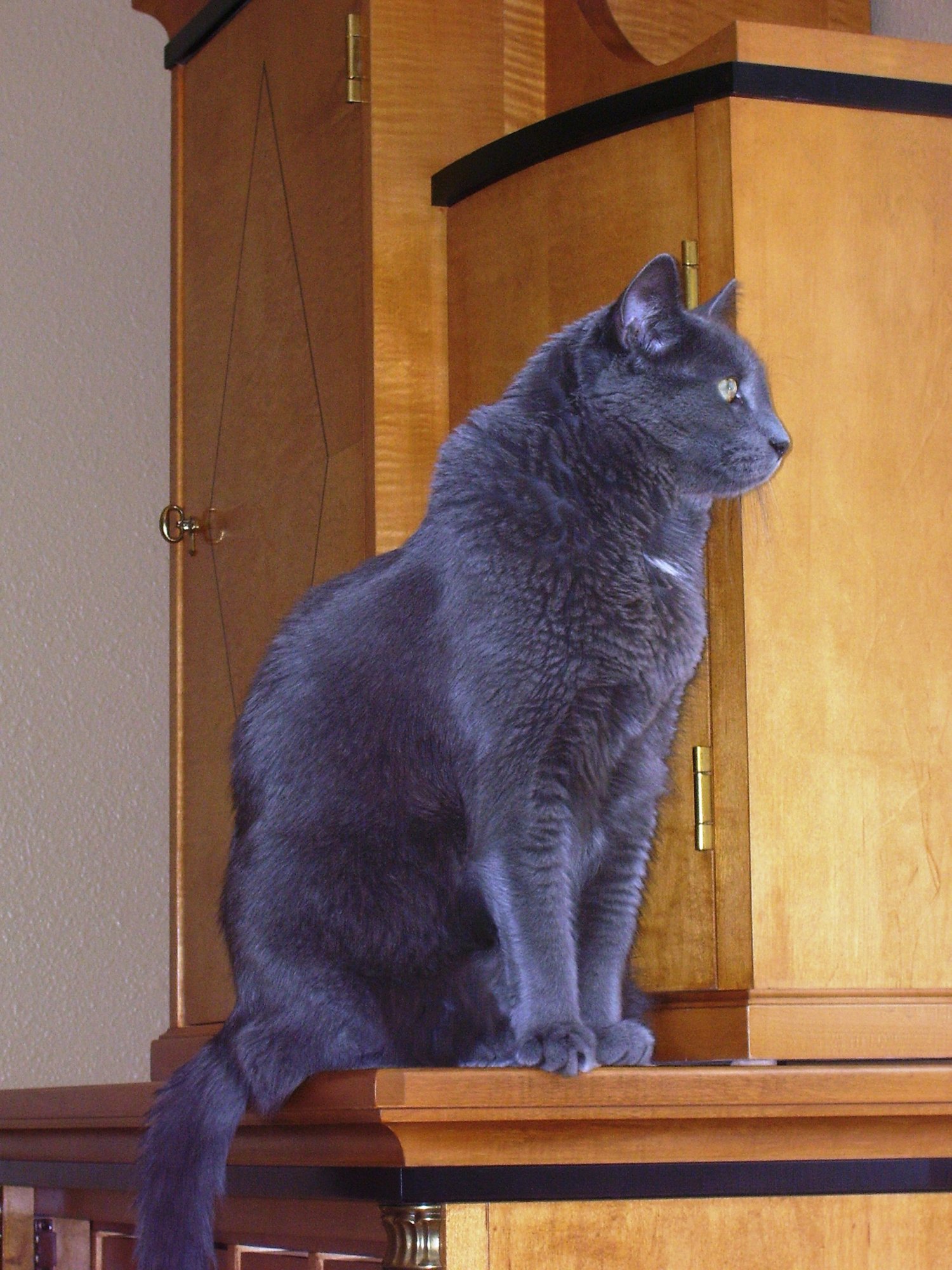 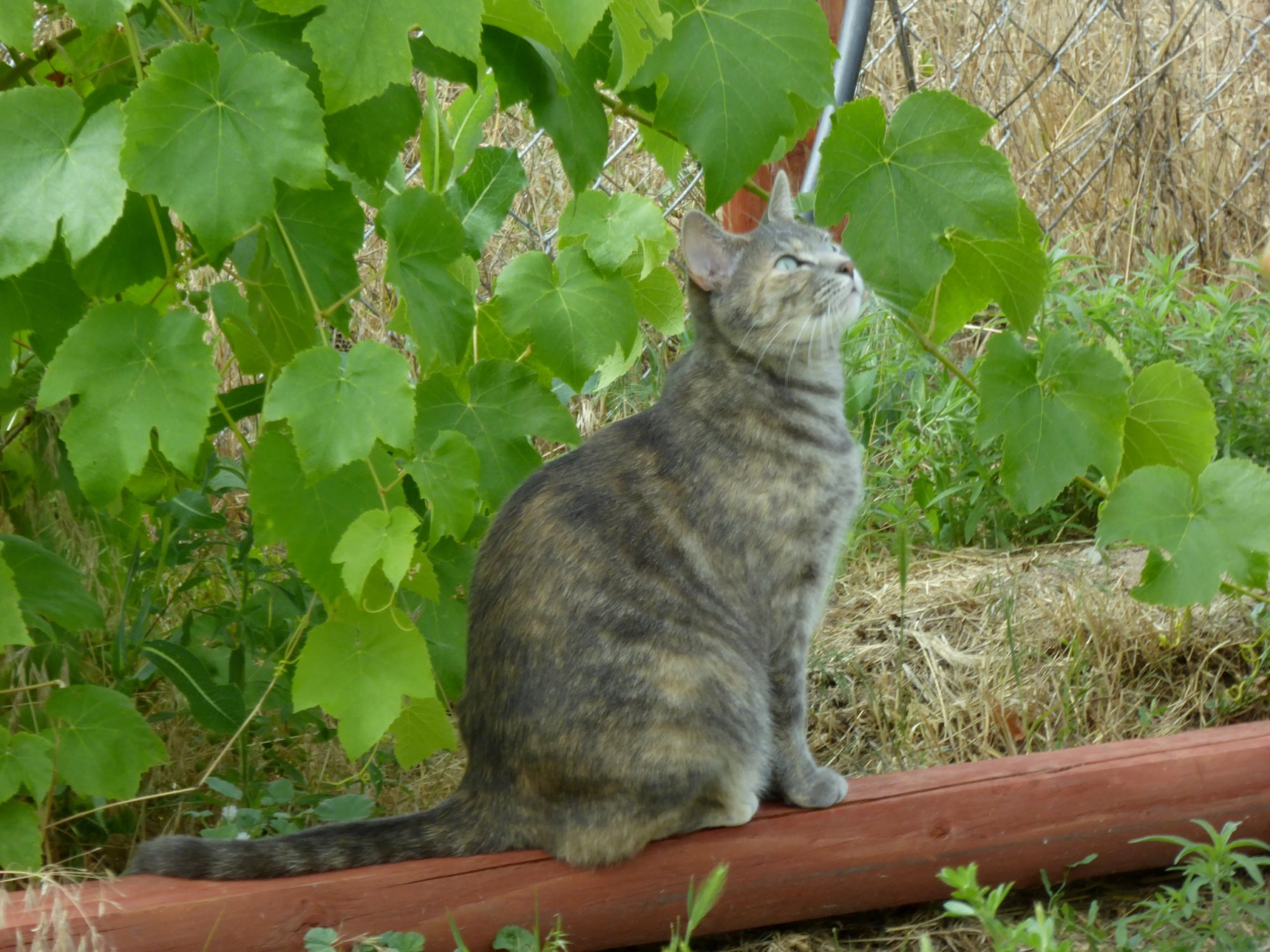 Our shy and amazing Coolidge came home with us when he was nine weeks old. We wanted just one kitten, so he was separated from his sister. When I realized how shy Coolidge was—he let me know by hiding in desk drawers, which he did by pushing them open from behind, and then somehow pulling them closed—I regretted separating him from moxie little Sasha, his litter mate and protectress.

The Pet Protectors had rescued a litter of kittens from a feral pride, in a field behind a travel agency. They had named our little kitty Romanov, presumably because he looked like a Russian Blue. We renamed him Coolidge, after the presidential tradition of Garfield, selecting Coolidge among the presidents because he didn’t say much.

When we brought him home, Coolidge made a beeline for cover under the bed. I got down and extended a treat to him with my hand, and he deftly took it. But he wasn’t coming out.

We waited a few hours, and my husband put his hand on Coolidge’s back, and gently pulled him forward till I could pick him up. Coolidge looked terrified, but snuggled into my arms. He seemed to feel safe enough with us, but hesitated to leave the safety of the bedroom. I coaxed, and finally carried Coolidge into the kitchen and showed him a bowl of kitten kibbles. He ate them. I put him on the litter box we had prepared, optimistic that we would come home with a kitten. He knew what to do.

Coolidge had one more family member to meet: Hardy, our then 12-year-old Shetland sheepdog. They established a mutual tolerance and non-persecution compact.

We successfully persuaded Coolidge that he was too precious to go outdoors, and he never pushed the issue. The outdoors had been only trouble in his first two months of life. For one thing, he had contracted lungworm, which took close to a month to resolve with medication.

It was a month before Coolidge ventured into the dining room, but as he grew, he explored more. When he was two years old, he broke one of his hocks on a routine prowling mission. We suspect he incurred the injury prowling the rafters of the basement ceiling. The vet put a cast on his leg, with instructions to keep him confined to a cage, with no running or jumping, for 10 weeks.

My husband built a large cage for him with wood and light fence wire. Coolidge wasn’t happy, but he wasn’t as morose as I expected he might become. His quarters were in the living room, where I could spend a lot of time with him. I made an advent calendar to check off the days of our kitty’s captivity, and hung it on his enclosure.

Coolidge became diabetic when he was eight years old. He hated tinned food and would eat only kibbles, which are high-carb. I joined the Feline Diabetes Board online and learned how to treat Coolidge’s diabetes and how to cope with the sorrow of his compromised life. I checked his glucose and administered his insulin shots twice a day for the next nine years.

For the last two years of his life, Coolidge also had hyperthyroid, and I treated that as well. Then, at 17, chronic renal failure struck. There is no surviving it. Coolidge lived to be 17, which is exceptional for a cat with his health issues. He was never over-strong; he simply had people with a never-never-never-never-give-up ethos.

Coolidge surrendered his vitality on God’s time, without euthanasia, at home in my arms, on August 13, 2015, at 3:45 in the morning.  It was peaceful and awful at the same time. I held him through his throes. My husband built a wooden casket for our amazing cat of 17 years, and we put him in the ground in our small orchard. That was when I finally cried.

I called our vet when his office opened to let him know, and we commended each other for Coolidge’s good care over the rigorous years. But I had a question, and it was hard to ask, because I thought it would seem terrible. But I had to ask. I called our vet again at 4:30 in the afternoon. “Dr. A, I have never slept in this house without a cat!” (We had moved here five years earlier, when Coolidge was 12.) “I don’t think I can! Would it be horrible to get another cat right away?”

Our vet was not judgmental, but reassuring. “Sometimes it can be very healing to get another cat right away,” he said kindly.

My husband agreed. I called the pet shop that hosts select pets for the Animal Shelter. They had two kitties: a small, sickly male kitten; and a small, pretty, healthy, young, active, year-old spayed female Tabby, who less than half an hour later was ours! We named her Euphemia, Effie for short.

(Note: This post was originally published at Eel Creek Chronicles by the author, Lauren Bottomly. All photos and text remain the property of the author.)

I’m a retired attorney, married to a hard-working attorney. We have a companionable cat named Effie. I am a writer, and I take photographs of what I find enjoyable and beautiful around me, especially Effie, the basalt hills, prairie grasses, and the Snake River. My husband and I are avid fishers, and we enjoy fishing on the Snake River from wooden boats my husband builds.

42 thoughts on “How soon is it thinkable to replace your faithful feline companion when he or she passes on?”