Some of you will know that we are going to be in NYC and will be staying at the Algonquin hotel for part of our stay. Some of you may know that this hotel has a feline companion called Matilda! And she is hosting her annual celebration party in an effort to raise money for the Mayor’s Alliance for NYC’s Animals.

Hotel’s legendary feline is celebrated and aims to raise $10,000 for the Mayor’s Alliance for NYC’s Animals

NEW YORK, NY– Every year The Algonquin Hotel honors its most famous resident, Matilda III, The Algonquin Cat, with a celebration. The party will be held on Wednesday, August 10, from 5:00PM – 7:30PM in the hotel’s iconic lobby.  2016 marks the 10th anniversary of the cat fashion show and will feature a show by Ada Nieves, a certified animal fashion designer by the Fashion Institute of Technology. The theme of the fashion show, Through the Decades, will honor the iconic looks of the hotel’s most famous guests and patrons, including Al Hirschfeld, Michael Feinstein, Marilyn Monroe, John Barrymore and many more!

In honor of the 10 year anniversary the hotel is hoping to raise $10,000 for the Mayor’s Alliance for NYC’s Animals.  Starting July 1, tickets will go on sale online for $50 per person.   In addition the hotel will hold an online auction with exciting prizes. Auction items include: two tickets and a backstage meet and greet with the cast of the brand new revival of CATS, private consultation and cat tree house by Pet Tree Houses, custom autographed poster by Leslie Martini  and Massimo Mongiardo, author and illustrator of the upcoming new children’s book, Matilda: The Algonquin Cat, private walking tour hosted by author and historian, Kevin Fitzpatrick.  The online auction, along with ticket sales, and additional prizes can be found on the event’s WEBSITE. 100% of the proceeds will benefit the Alliance. 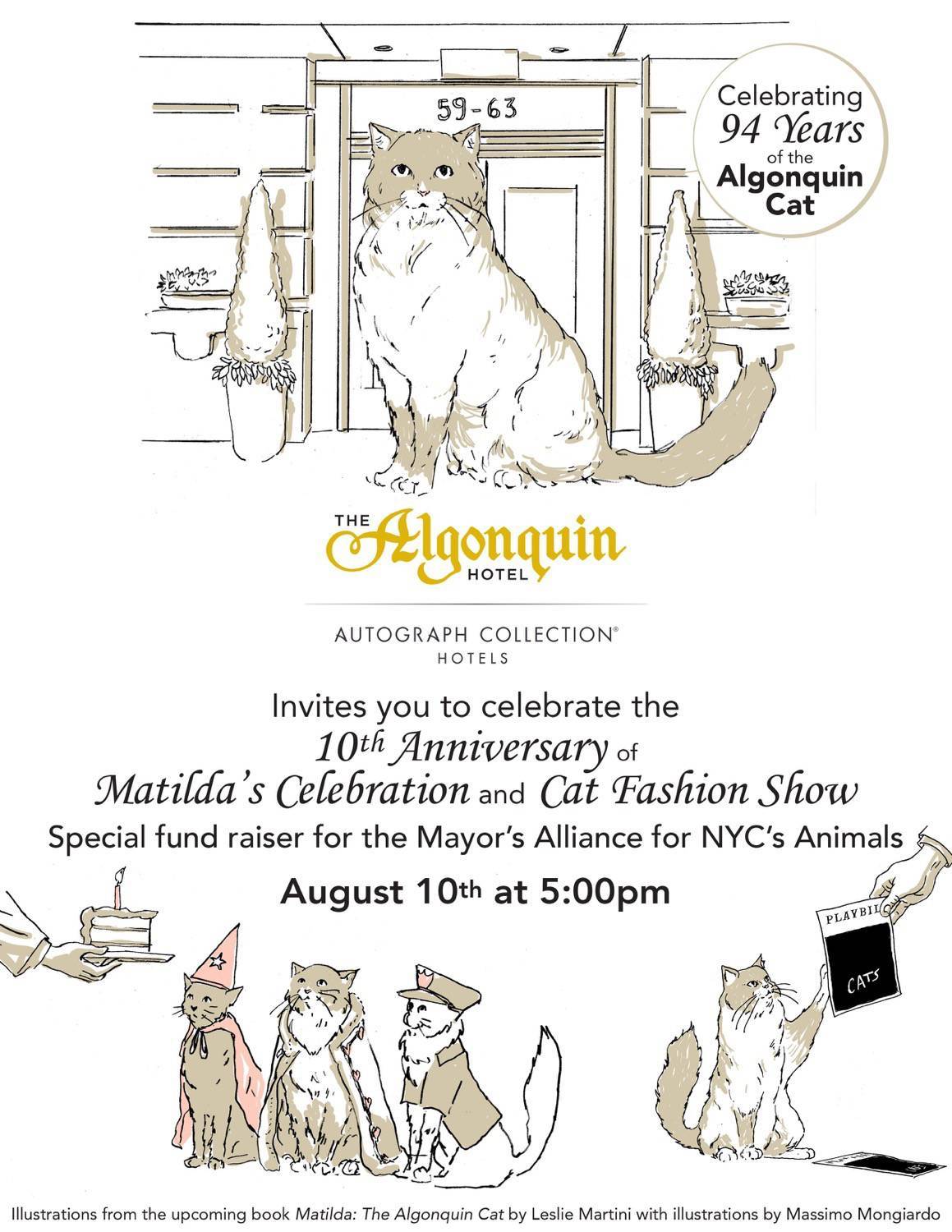 There will be an on-site mobile adoption unit parked in front of the hotel from 3:00PM – 7:00PM.  The $50 donation allows all guests access to the fashion show and includes a reception with special hors d’oeuvres.   Additional funds will be raised throughout the evening with raffle prizes, including a variety of pet products curated by the event’s co-chair, Pet Lifestyle Expert and author, Sandy Robins.

Guests attending the event are encouraged to wear their best feline inspired outfit.

About The Algonquin Cat: 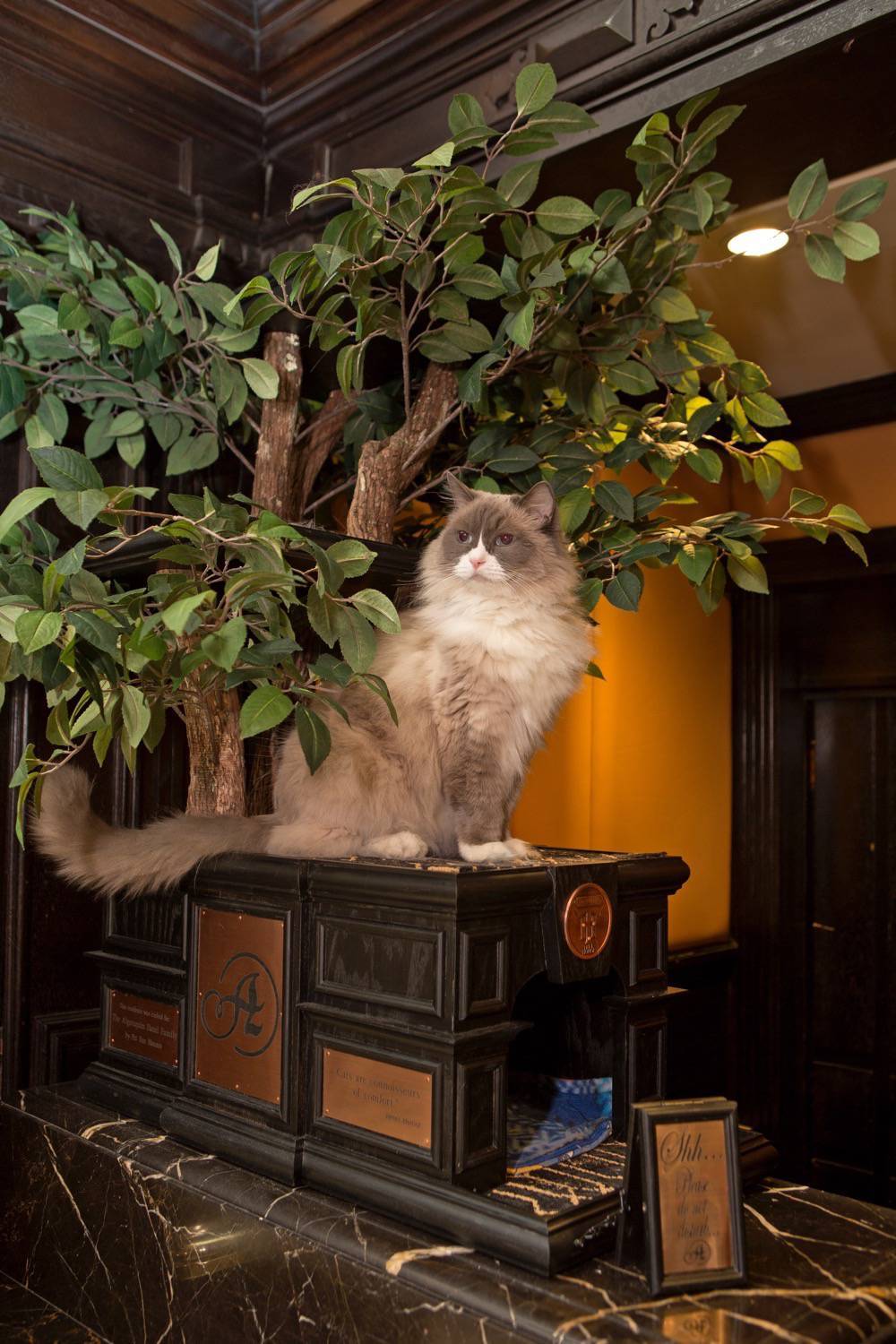 For many years the history of The Algonquin Cat was believed to have its origins in the 1930’s, when a stray cat came wandering into the hotel for food and water.  After the hotel acquired an out-of-print book written by the hotel’s first general manager, Frank Case, a chapter was discovered about a cat named Billy. Based on the timeline of the book, the hotel is now proud to say the lineage of The Algonquin Cat dates back to the early 1920’s. Two days after Billy passed, a stray cat wandered into the hotel and The Algonquin welcomed Rusty. The famous classical actor, John Barrymore, was a resident at the time in the early 1930’s and Rusty was renamed Hamlet in his honor. Hamlet is said to have been Barrymore’s greatest stage role. The hotel has had a total of 11 cats, including Billy. The lineage includes seven Hamlets and three Matildas. Each cat that has reigned at The Algonquin has been a rescue.  In 1980, author Hilary Knight immortalized The Algonquin Cat with his cartoons for a children’s book on which he collaborated with Val Schaffer.  The current Matilda began her residence in December of 2010. 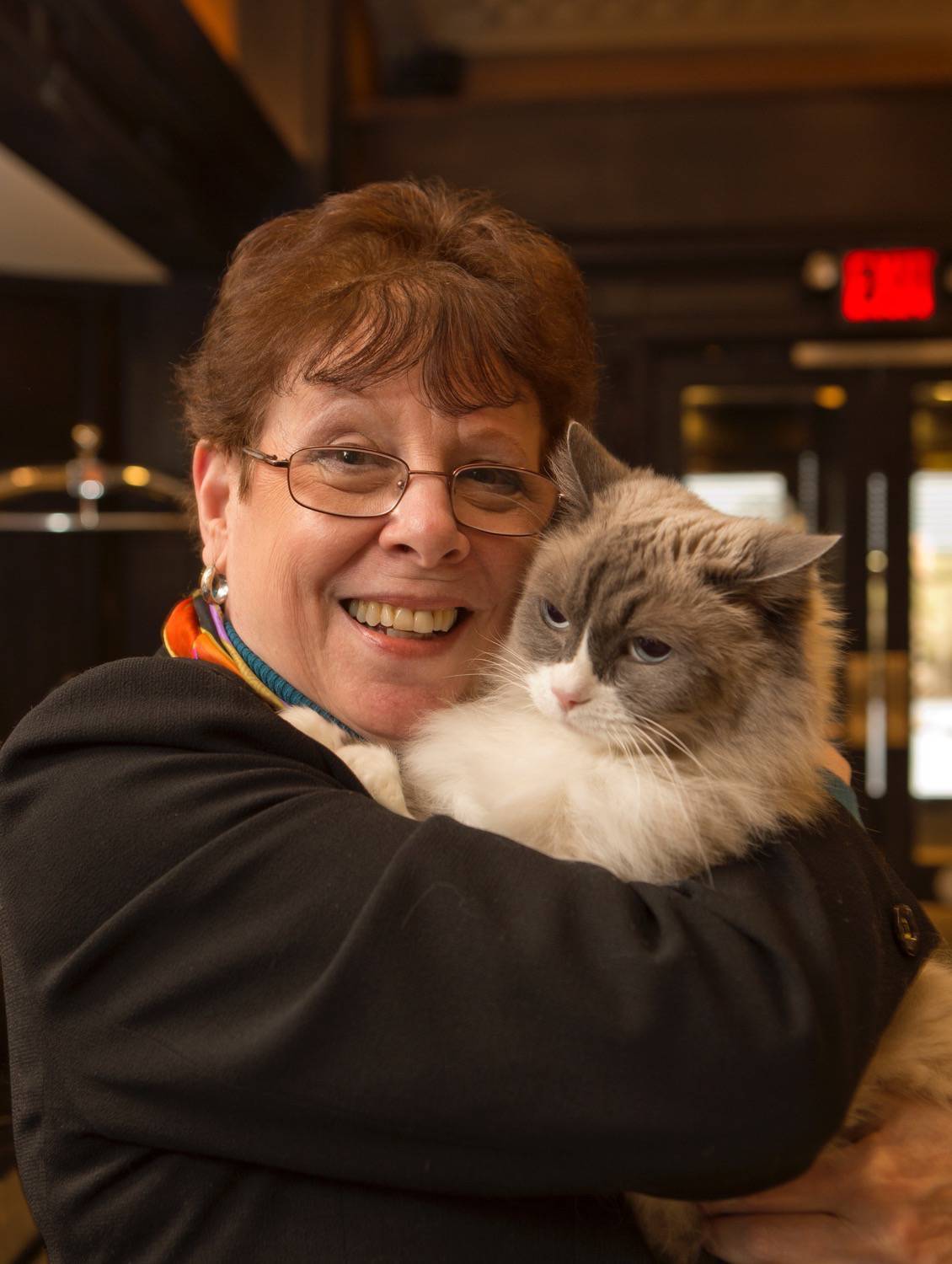 Today, Matilda is looked after by the hotel’s Chief Cat Officer, Alice De Almeida. The hotel’s executive chef cooks her special meals on holidays. She receives fan mail and gifts constantly, from around the world, including Japan, Australia and Russia.  Matilda can be found on Facebook ,Twitter and Instagram.  She can also be reached via e-mail.

We hope you liked the preview of this event and if anyone is going let us know as unfortunately we won’t be there until later that month!

P.S: Don’t forget to sign up for the Katzenworld Newsletter here.