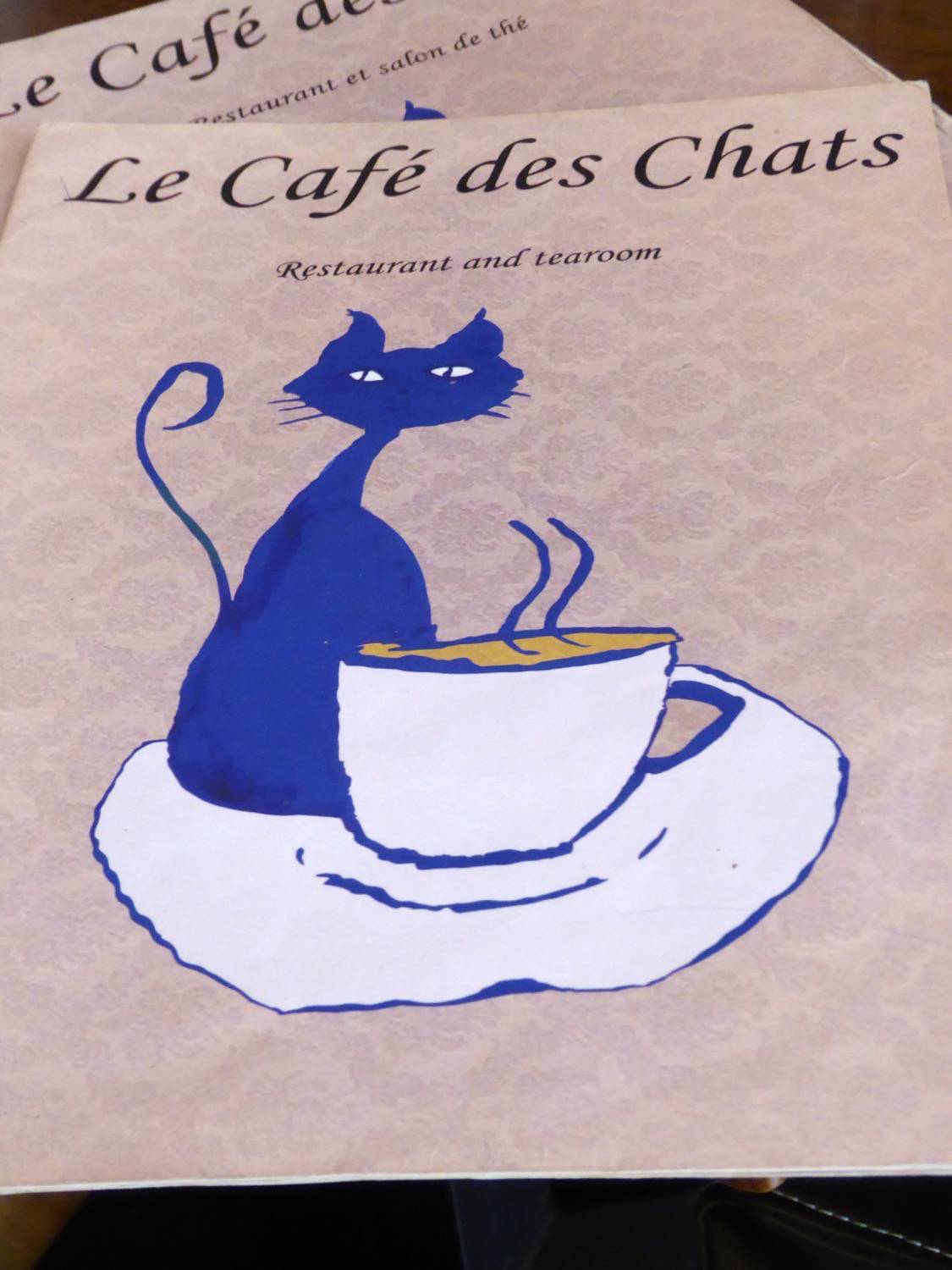 My visit to Paris was all planned out. The house and gardens of Monet, Palace of Versailles, The Avenue des Champs-Élysées…. and then I spoke to Marc, founder of Katzenworld, who mentioned the first cat cafe in Paris and that was that!

My husband groaned as yet another cat related event intruded on our break. He really should be used to it by now…being married to a cat lover 🙂

And so it was! Our first day in Paris getting lost around the narrow back streets of the Marais district in search of the Cafe des Chats! I had expected there to be a waiting list but, to my surprise, I managed to get a reservation, via an email request, for the following day. Walking for an hour we finally stumbled into a street with a fair amount of women looking into a shop window.

“That’s it” I said, instinctively knowing that a group of woman would be intensively interested in only one thing. CATS! (Unless it was a shoe shop of course!!) 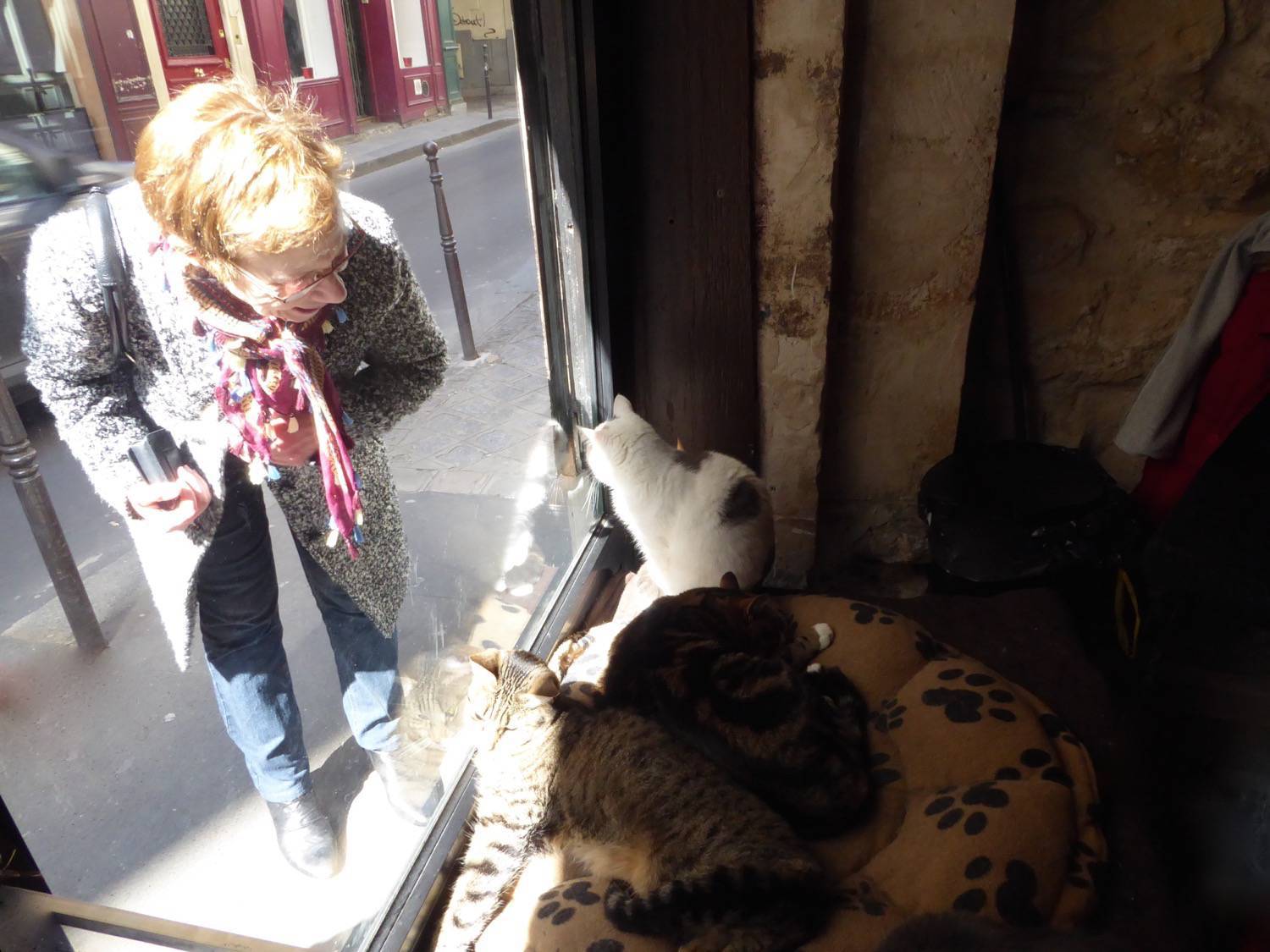 My instinct was correct.

The Paris cat cafe was the brain child of Margaux Gandelon. I emailed her for an interview but sadly never heard back. The cafe is a small dark intimate but relaxing space with a scattering of tables, chairs and sofas and dotted with several cat climbers and countless cat beds. Numerous cat rod toys can be found around the cafe. About 15 cats permanently live their, adopted from various local rescue centres. The cafe was mostly filled with woman and children, as well as my weary husband and the cats enjoyed being doted on. The same policy exists here as in London’s first cat cafe: “Don’t wake them, don’t bother them, don’t feed them, don’t give them water”. 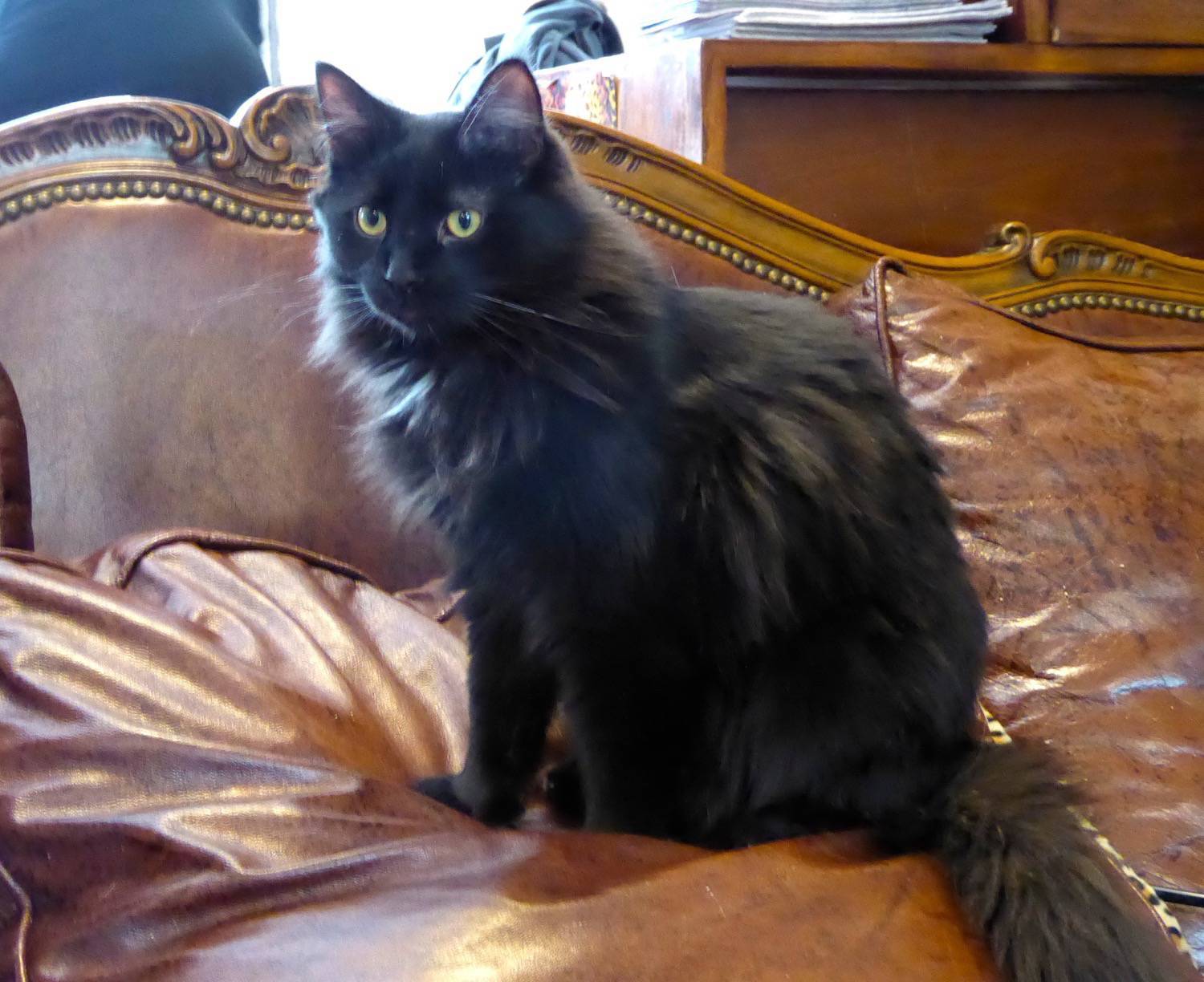 We took this on board and decided to move to a less appealing table away from the window as a kitty was asleep on one of the chairs. However, to my surprise, another customer walked straight in and lifted the cat off to take the best seat.

The food was great quality and both myself and my husband enjoyed a hearty, not too pricey lunch, surrounded by our favourite animals. Whilst waiting for the food to arrive I had a wander around the cafe to take some pictures. It was very different from the London Cafe, in that not many high up areas had been specially designed for the cats to climb, walk across and lie on. There were a few standard cat trees but not as much ‘catification’ as I would have liked to have seen. It would be ideal if cat cafes had secure outside space for the cats to get some fresh air but, as many are in major cities, that probably is a tall order and not a practical one. 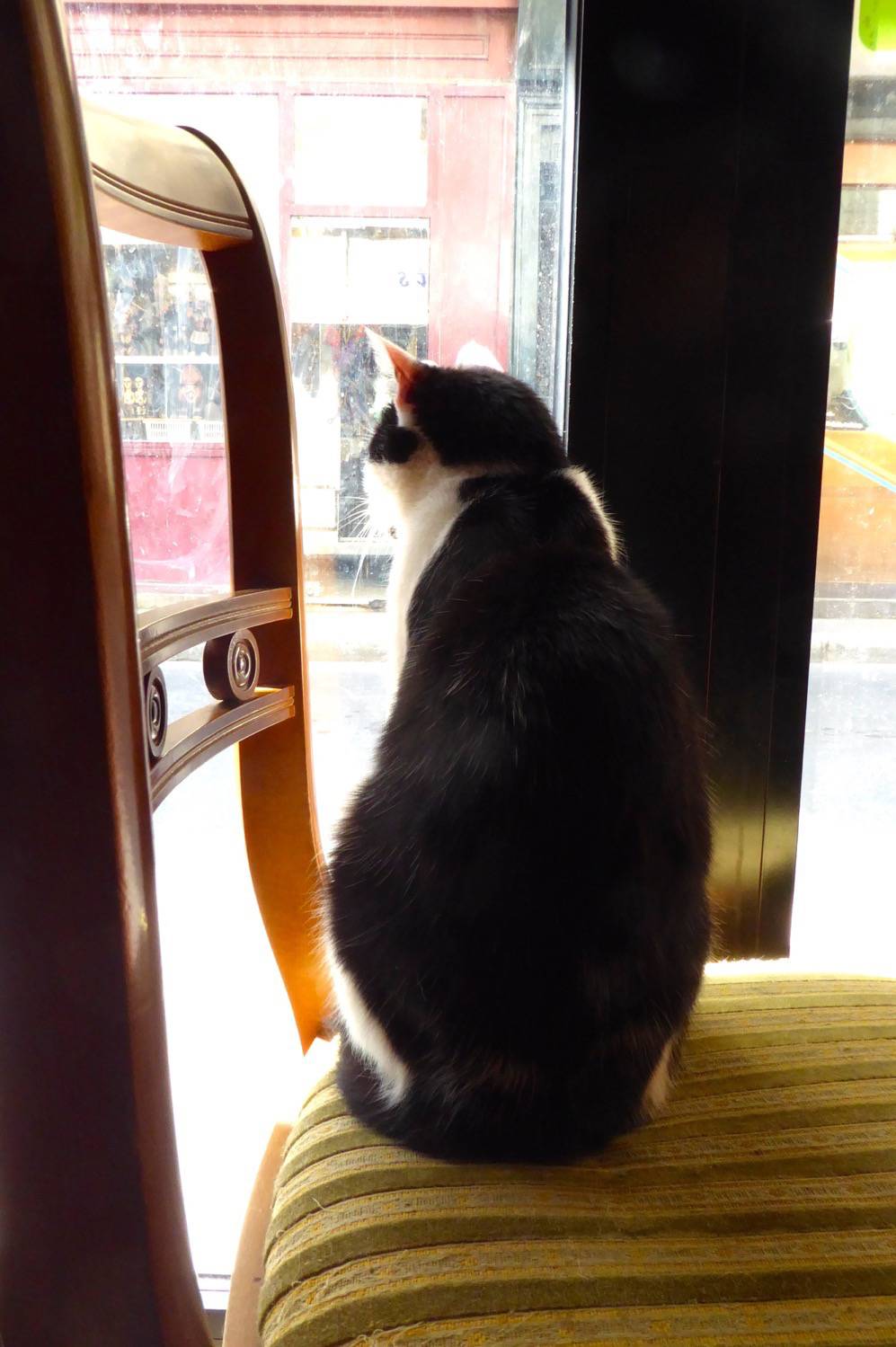 As I returned to my table two Australian woman were playing with several cats. I began chatting to them about the cafe and its concept. It transpired that one of them worked for an environmental government department in Australia. It just so happened that her colleague is the person responsible for reducing the feral cat population in Australia. A very hot subject matter in cat-loving circles! Intrigued by her arguments for euthanising feral cats, rather than the trap neuter and release programs many other countries have adopted, we swapped emails with the intention of her introducing me to her colleague for an interview. She was keen for me to understand the reasons why they were against feral cats, to protect their native wildlife, but at the same time we knew the subject could be too controversial over a light lunch playing with Parisian cats.

We agreed to chat further in the future, so that I could gather facts and figures for a truly informed debate. The subject matter was quickly changed!

So back to the cafe.

I watched about 5 of the cats sitting by the glass front of the cafe, enjoying the sun shining through the glass as they watched people and dogs pass by. I wondered why the cafe couldn’t just be a stop gap before they were adopted to possibly live a life with hope of a garden or some form of outside access. This made me think about my stance on the whole cat cafe phenomenon. I realised I am in two minds. The cats here, as well as in the London cafe, look relaxed, seem to get on well with each other and are lavished with affection which they seem to enjoy. On the other hand I feel uncomfortable with the fact that they cannot escape from other cats or human attention if they wanted too and are confined to life in one or two small rooms as indoors cats. No natural hunting, no natural roaming, no natural light. Of course, we hope there are mutual benefits to be had and, after an in-depth chat with the founder of Lady Dinah’s Cafe, Lauren Pears, I was glad to hear that intervention is swift (from her team at least) if a cat shows signs of not wanting to live in their cafe environment. Lets hope it is the same for the ever expanding cat cafe’s around the world

The world’s first cat cafe opened in Taiwan in 1998 and quickly caught on in Japan. As I was surfing the net I came across the first cat cafe closure due to worries about the cat’s health and welfare. The Guardian reported this here. I was surprised, because the concept arose from peoples’ intense love of cats, the lack of space in many city apartments, coupled with the fact that many landlords forbid tenants to have animals. If you think about cats and space it seems ironic that cat cafes, many of them small, house many cats together to supposedly combat this very issue. In fact, according to The Guardian, Japanese customers can go to different cafes for pet animals as diverse as hedgehogs, horses, rabbits and owls. It’s a growing trend that I’m uncomfortable with. 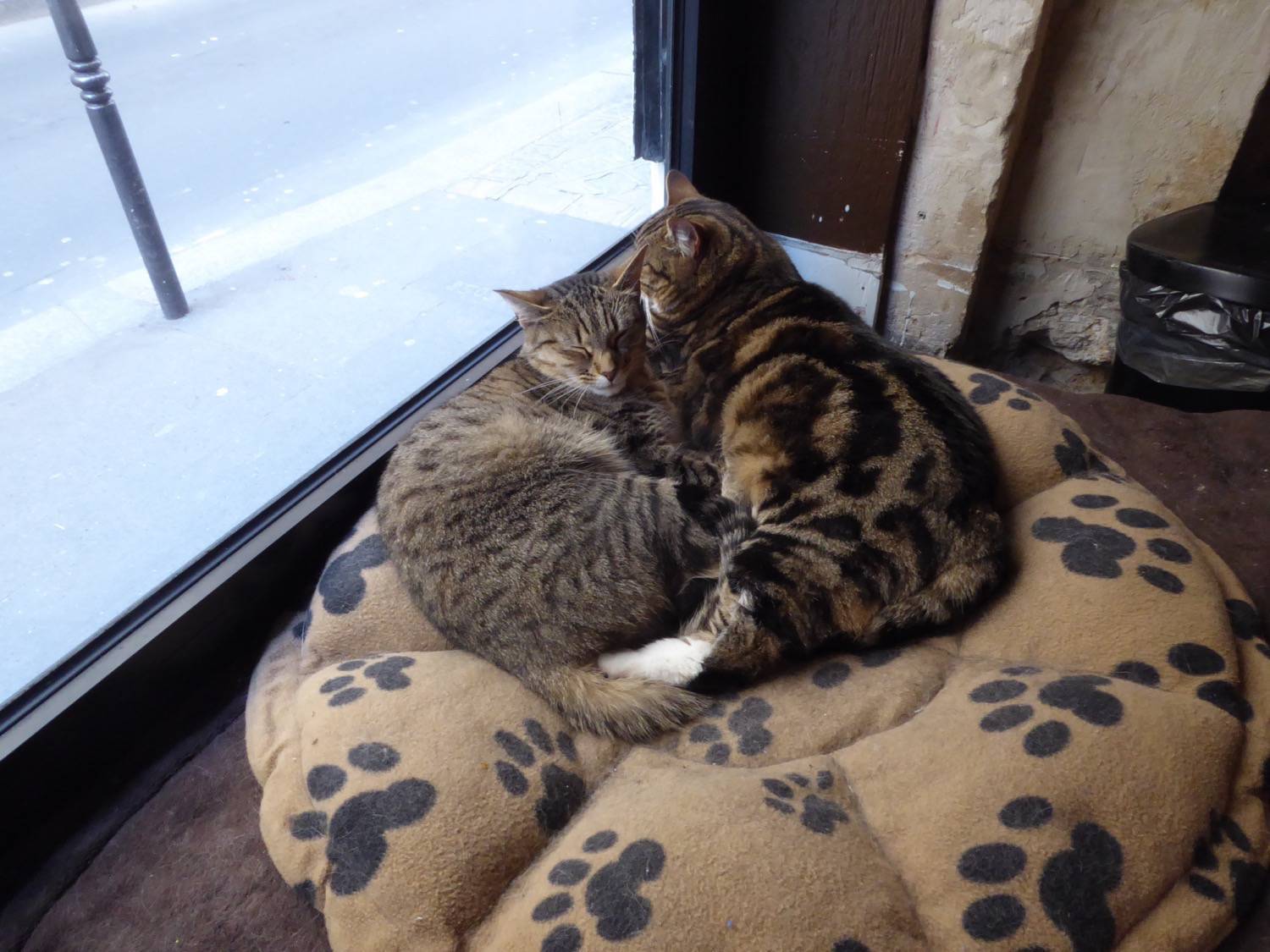 The world has become obsessed with cats and it seems we just cannot get enough of them. I risked divorce to visit this cafe on my first day in Paris!!! That’s how crazy we have all become over these fur bods.

One thing is for sure. Cat cafes are here to stay, as the cat overtakes every animal on the planet to become the world’s number one pet.

After we left the cafe, my husband wrote on Facebook ‘Right, now the Cafe des Chats is over with, we can get on with our holiday!!” 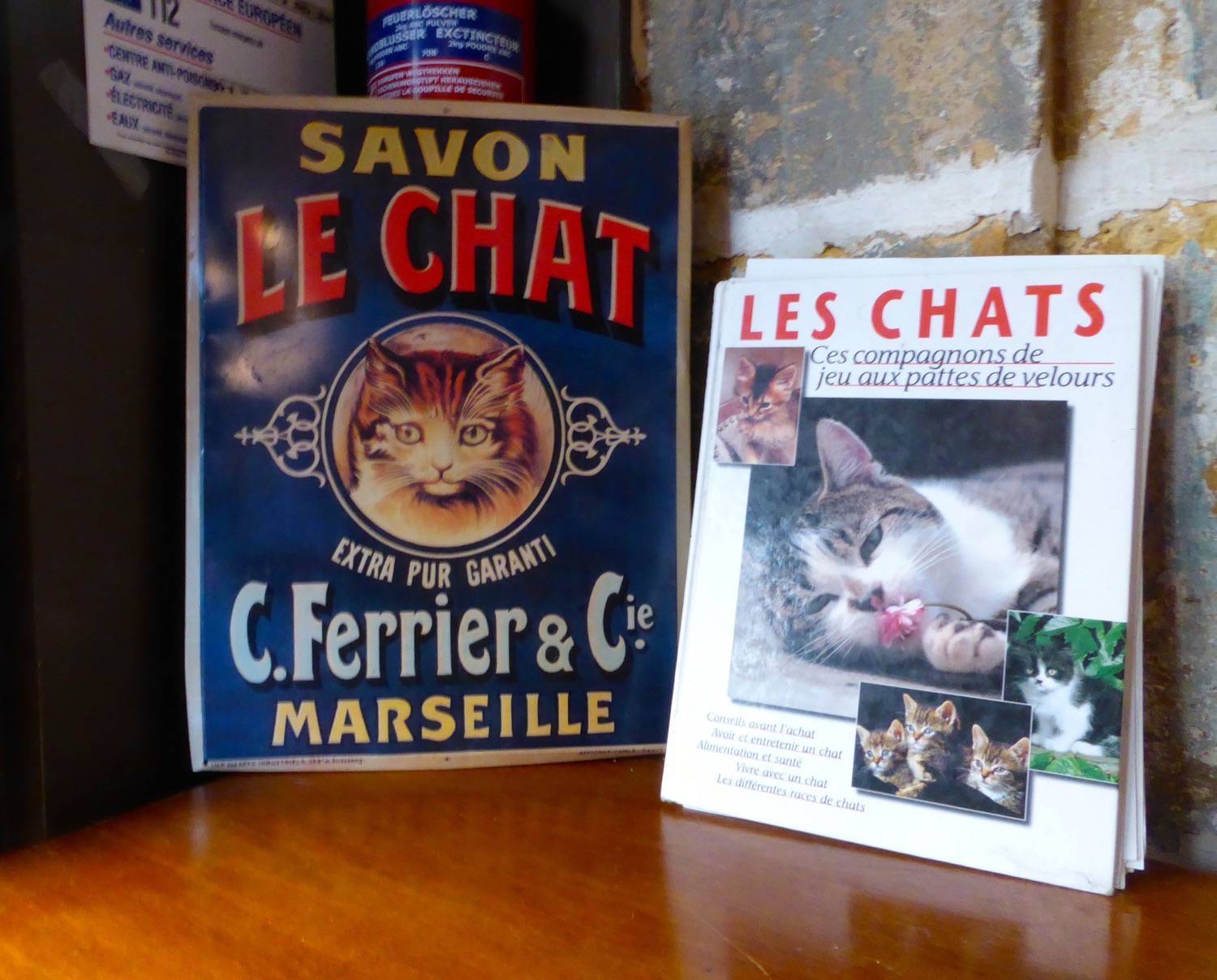 Anita Kelsey holds a first class honours degree in Feline Behaviour and Psychology (work based BA Hons) and runs a vet referral service dedicated strictly to the diagnosis and treatment of behaviour problems in cats. She is also a qualified cat groomer and specialises in grooming aggressive or phobic cats. Anita writes for Your Cat Magazine and is on their experts panel answering readers questions on cat grooming. She also advises on feline behaviour for the CFBA (Canine and Feline Behaviour) magazine as well as being a full member. Anita is based in Notting Hill, London, and consults all over the UK as well as international requests. She lives with her husband, a music producer, and two Norwegian Forest cats, Kiki and Zaza.

Anita Kelsey holds a first class honours degree in Feline Behaviour and Psychology (work based BA Hons) and runs a vet referral service dedicated strictly to the diagnosis and treatment of behaviour problems in cats. She is also a qualified cat groomer and specialises in grooming aggressive or phobic cats. Anita writes for Your Cat Magazine and is on their experts panel answering readers questions on cat grooming. She also advises on feline behaviour for the CFBA (Canine and Feline Behaviour) magazine as well as being a full member. Anita is based in Notting Hill, London but consults all over the UK as well as international requests. She lives with her husband, a music producer, and two Norwegian Forest cats, Kiki and Zaza.

18 thoughts on “A visit to Paris’s Café des Chats”