Here is my ‘The Owl and the Pussycat II‘ which I did for an exhibition a couple of years ago.

All my anthropomorphic paintings have a back story or character snippet if you like. These generally come to me when I am drawing out the character or doing the painting itself.  My hope is they will end up in a story book eventually.

Let me introduce you to Billy… 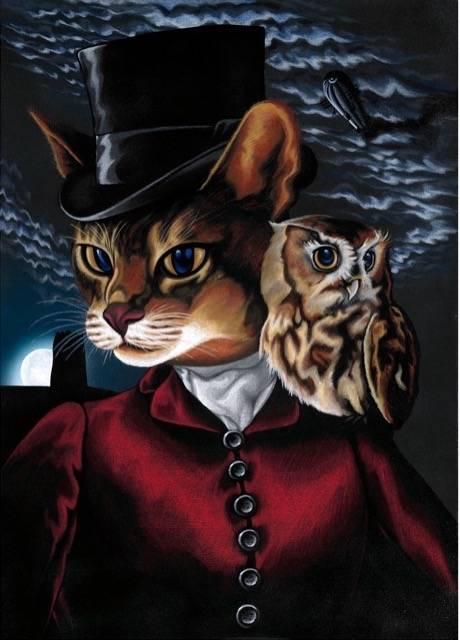 Who, along with the celebrated society portraitist, landscape and ornithological artist James Tiberius Starling and the renowned cartographer Garth Phineas Fullerton, mapped the virgin frozen wastes of the far north territories in their sponsored ship of the air The Enterprise.

My work illustrates my love of ironic juxtaposition, and my interest in Victorian and Edwardian colours, with my series of human-form animal portraits. A typical example of my work is ‘The Aviator’: a penguin in early period pilot’s uniform at the North Pole. Or to put it another way, a bird that can’t fly dressed in flying kit and standing at the wrong end of the world.

Within three months of exhibiting for the first time U was picked up to be included in two contemporary urban auctions alongside Damian Hirst and Banksy by Dreweatts in 2012.

For private commissions, murals and sign writing get in touch. Lots of prints of furry felines and pugnacious pooches available on the web site. Plus the odd pesky bi-polar penguin and a pampered panda.