We were lucky enough to be sent a super exclusive review copy of the adventures of one of our recent guest stars – Piggy the cat (You may have seen her guest post here)!

It’s a super cute little book, about the adventures of Piggy and her unlikely best friend, Melvin the mouse. In their escapades, they meet and befriend a few unlikely companions, but you’ll hear no spoilers from us!

A great, short read for cat lovers young and old, told from the perspective of Piggy herself by master tail-weaver Goober.

And here is the promised little surprise from Piggy and Karen! It is the FIRST chapter of the book completely free for you to enjoy! And even better you can enter our giveaway for one lucky person to win a FREE copy of this book signed by the author Karen Malena! 🙂 To enter the giveaway simply click here and gain extra entries via the available options.

A pink-nosed kitten barely two months old, reached his paws toward the stately grey-striped tabby trying to bathe him with her sandpaper tongue. He swatted at her tail, trying to catch it between two small, but very furry paws. He wriggled away from her, annoyed at this bath time ritual.

“Stop it, Mom, that tickles,” the kitten said.

The mother cat ignored her babe, continuing to lick every inch of her precious adopted son. The tongue combed through the white fur, and her paw gently held him down.

She fretted over the rescued kitten, not only in keeping him clean, but especially because he was so vulnerable, the smallest one of the litter. Her human had chosen him from the animal shelter for this very reason. He had a soft spot for the underdogs of the world.

“Why do I have to be clean before bed?” The kitten squirmed, catching his mother’s tail this time before she gently pulled it away from him.

The mother cat who’d answered this question many times before stopped for a moment.

“Peanut,” she said. “I have a different kind of “tail” for you. What if I tell you the most wonderful story tonight? It’s a bedtime tale that I think you might enjoy.”

“Oh yes, but this one is true. It’s about an unlikely friendship, great bravery, heroes and villains. This is the story of the great mouse rescue.”

The grey-striped tabby cuddled her young one close. She licked his soft, tiny head and then rested her chin upon him. A sigh escaped her, and she looked up into the darkness of the room; her cat night vision excellent. Her human was asleep, snoring away in the next room. She closed her eyes and let the thoughts come to her; thoughts of her dear sister and friends. A meow that sounded oddly like a chuckle echoed in her mind, or had she heard it?

Settling in with her paw across Peanut’s back, Goober the cat began her tale.

A dilapidated, gray-shingled house sat among tidy red brick homes in a quiet neighborhood of Ambridge, Pennsylvania. It stood out for the peeling strips of paint, the sagging front porch, and the tendrils of ivy creeping up the side. A wooden fence badly in need of a paint job surrounded it with a creaking, rusty gate. Behind this gate sat the meanest, toughest, and angriest cat anyone ever laid eyes on: his name was Bolivar. He belonged to no one and nobody belonged to him. Day after day, he’d wait for unsuspecting pretty, seducing them with his snake-like voice, and then grabbing them when they least expected.

The house in which he stood sentry had been deserted for several years. He claimed this property for himself and picked fights with other cats in the neighborhood who dared step foot inside his weedy yard.

Bolivar lifted his ragged orange head and licked at a wound on one paw. The scar on the right side of his face and his partially torn ear pained him today; the results of many battles. His stomach growled; he hadn’t eaten a decent meal in at least four days.

Recently, the neighbors had begun to lock their trashcans up tightly; a few of them included heavy bricks on top to prevent him from tipping them. Not a scrawny bird to eat, not even a tasty little crawling bug; his mood went from bad to worse.

Out of the corner of his eye, through one of the slats in the fence, Bolivar spotted movement. In the next yard, a plump, furry brown mouse frolicked about. With his changing luck, Bolivar perked up. He lay low to the ground, every muscle in his body tense and alert. His tail twitched in anticipation and his hind quarters wiggled as he sprung forward to pounce upon the unsuspecting rodent. . .

Goober paused for a moment with her story. Peanut apparently had forgotten all about sleeping. He stared at his mama, wide-eyed.

“I thought you said this was a mouse rescue? It sounds like this cat was ready for dinner.”

“I did, son, be patient,” Goober said, and resumed licking her kitten. Peanut rolled onto his back, paws in the air, Mama’s tongue made the fur of his belly stick up in all directions.

“Well I don’t like Bolivar,” Peanut shivered. “He sounds mean and scary.”

“Yes, he was,” Goober said, sighing. “But let me go back a little further. I’m going to tell you how another cat, a brave, beautiful cat got the best of him and how she and a mouse became the closest of friends.

You see, we don’t always have to fight or prove ourselves to be big and strong. Sometimes it’s the smallest of creatures who can teach us life’s greatest lessons.” 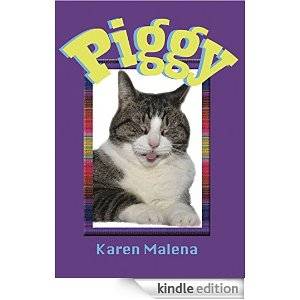 You want to read more now? The book is published through Tuxedo & Beans and can be purchased here or on Amazon.

And don’t forget to check them out on:

And don’t forget to enter the giveaway by clicking here and gain extra entries via the available options.

I’m Laura – 24 years old, currently living in Matsuyama, Japan and living the high life of a single lady with plenty of money to spend on games, and delicious foods!
I really really like eating and drinking, and will be sharing my culinary and technological adventures/musings with you via my WordPress blog here. 🙂
I hope you enjoy!