Today’s post is from the parents  of our good friend The Oreo Cat! Oreo is also the inventor of our super popular #TRT so please go and thank him for this fun day. 😉

On August 25, 2013, a three week old very frail and weak Oreo came to stay with us while awaiting adoption. After a brush with death, we decided to make him part of our family. Our home then became his forever home. With two step-sisters and one step-brother, Oreo now has quite a large family! He continues to keep us smiling each and every day. We are no longer sure whether we saved his life, or he saved ours!This is Oreo’s story. 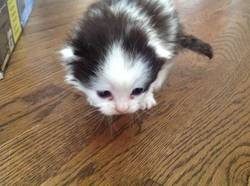 The Daily life of a rescue kitten

Oreo was found along with his sister Patches by my sister and brother-in-law in his parent’s back yard one summer day. The two were alone with no Mom.  My brother-in-law waited around all day watching to see if the kittens mother would return for them.  Unfortunately, after many hours of waiting, no mother came for them.  As the clouds rolled in and a heavy rain started, my brother-in-law decided to bring the kittens home and care for them.  The kittens were both quite small and needed to be bottle fed and helped to go to the bathroom.  Both my sister and brother-in-law cared for them for three days time up until my sister’s allergies became too important. The moment that I had seen the pictures posted of the two kittens on my sister’s facebook page, I told her that if they needed a place to stay, they were welcome in our home.  We have three adult cats, and a big house with plenty of room. I work from home as a Children’s Illustrator, therefore I was available to be around to take care of the kittens.  After putting up with her allergies for three days, my sister was  no longer able to keep the kittens.  She called me, I immediately accepted to take them and my brother-in-law brought them over.  I checked them for fleas upon entering the house, and had already arranged to bring them to our local animal refuge.  However, once meeting them and confirming that they did not have fleas, my husband and I decided to keep them and care for them while I tried to get them both adopted.Inquiries about the two kittens came almost instantly after posting pictures and a video of each one on Facebook. Patches was almost immediately adopted by one of my childhood family friends.  She was to be a gift for my friend’s father-in-law who lived alone in a small appartment in the city.  I agreed to keep Patches for six weeks time, up until she no longer needed to be bottle fed.  Oreo was half the size of Patches, and Patches herself was quite small.  They were both able to fit into the palm of your hand.  Patches was quite feisty and strong, and in the weeks to come she became very protective of her brother Oreo. Oreo on the other hand, was extremely weak, didn’t meow at all, and had trouble feeding.  If anyone were to adopt Oreo, they would have to have the time and know-how to care for him adequately.  A couple of days passed and I recieved an inquiry from a girl who’s sister’s cat just lost her litter of kittens. The mother cat was still full of milk.  This seemed to be a Godsend and was the perfect solution for Oreo.  Being with a mother cat who could properly care for him would be the best thing.  I consulted with my husband on the subject of Oreo’s adoption.  He had become extremely attached to Oreo after only a couple of days.  I told my husband that if he wanted to keep Oreo, it was fine with me, even if we already had three other cats.  However, he agreed that being with a mother cat that could properly care for and feed him was probably the best solution.  So I scheduled for Oreo to be picked up by the girl and her sister the next day at noon.The next morning, my husband woke up at dawn to get ready for his work day.  Before leaving, he checked on the two kittens asleep in their boxes.  I got up right after my husband left and went to check on the kittens and prepare their morning bottle. To my horror, I found Oreo lying face down in his box.  He was not breathing.  There was diarrhea all over the box and all over him.  I picked him up and quickly checked for a heartbeat.  His heart was still beating, but very faintly.  Not a breath was coming out of his nose.  I brought him to the bathroom and washed him off in warm water and wrapped him up in a warm blanket.  I called my husband crying and told him that I thought Oreo was going to die. My husband then said that when he checked the kittens that morning, Oreo was lying in the litter box.  He moved Oreo over and thought the kitten was sleeping, but had a weird feeling.  I tried my best not to panick, it was too early and my veterinary clinic was not yet open.  There were no animal hospitals close by either.  I had been trained in First Aid and CPR years ago… But for humans, not cats! Then I remembered… I had seen something on TV the week before showing how to perform animal CPR and mouth-to-nose on pets. I put Oreo on his side on the floor, checked for airway obstruction, extended his little teeny neck and began to breathe into his nose while keeping his mouth closed.  After what seemed like forever, a small snort and a breath came out of him… he was breathing again!  I called my veterinary clinic and left a message asking if I could bring Oreo in as soon as possible. Thankfully, the nurse was there early, she answered and told me to bring him in immediately.  I quickly threw on a dress and some shoes and headed for the clinic as quickly as possible. 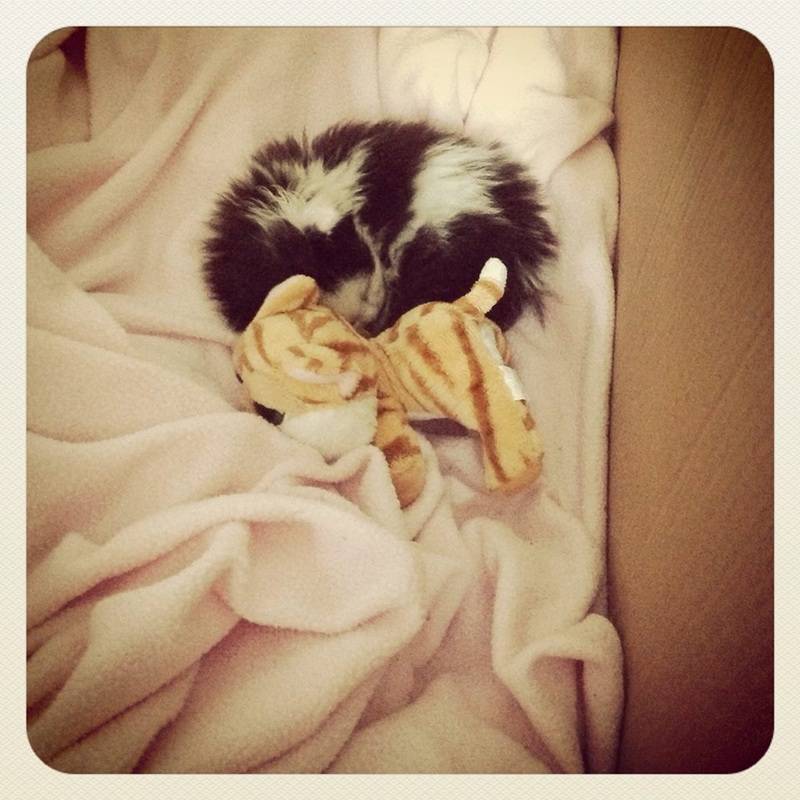 The Clinique Veterinaire A Mon Chat is our local veteranary clinic specializing in felines. The small friendly staff are caring, loving and helpful.  I am grateful that we have such an amazing place to go to when our cats need special care. The nurse took Oreo in right away and placed him in a warm blanked that sat on top of pairs of rubber gloves that she had filled with hot water.  The nurse did her best to care for Oreo while awaiting the arrival of the veterinarian.  The clinic graciously put aside other morning appointments to give Oreo’s situation top priority. Oreo spent the day at the clinic and came back to us that evening. After this whole ordeal, my husband and I decided to keep Oreo.  Our home then became his forever home.

It took many of the following weeks to bring Oreo back to full health.  He and his sister both had a parasite which caused them both to be ill.  However, Oreo’s sister Patches was strong enough to fight everything off quite quickly.  For Oreo, the process was quite long and slow.  Many weeks were spent giving him intensive care and attention, which included feedings around the clock.  This resulted in many nights spent with little to no sleep until Oreo pulled through.  We are happy to say that he is now a healthy and happy kitten, and growing up to be a great cat!Oreo has changed our lives forever and brought us both lots of joy and laughter.  Our lives would not be complete without him.  He is a very special cat.  Oreo has brought out the best in both my husband and I.  He has inspired each of us to be creative in our own individual ways.  We welcome you to his website and we hope that you will enjoy the artwork that Oreo has inspired us to create.Oreo’s Mom & Dad,
Tina and Chris.

To find out more about him and to support his campaign to help local shelters head over to his website by clicking here. And to visit him on Facebook please click here.

(Oh and super top secret it is his birthday this coming Monday!!! So don’t forget to sneak over to his page or Facebook to wish him HAPPY BIRTHDAY)

30 thoughts on “Guest Star: The Oreo Cat – Helping to change the world one smile at a time”