The Story of Odin, The Lucky Unlucky Black Cat

Trigger warning: A cat gets hurt, but there is a happy ending. 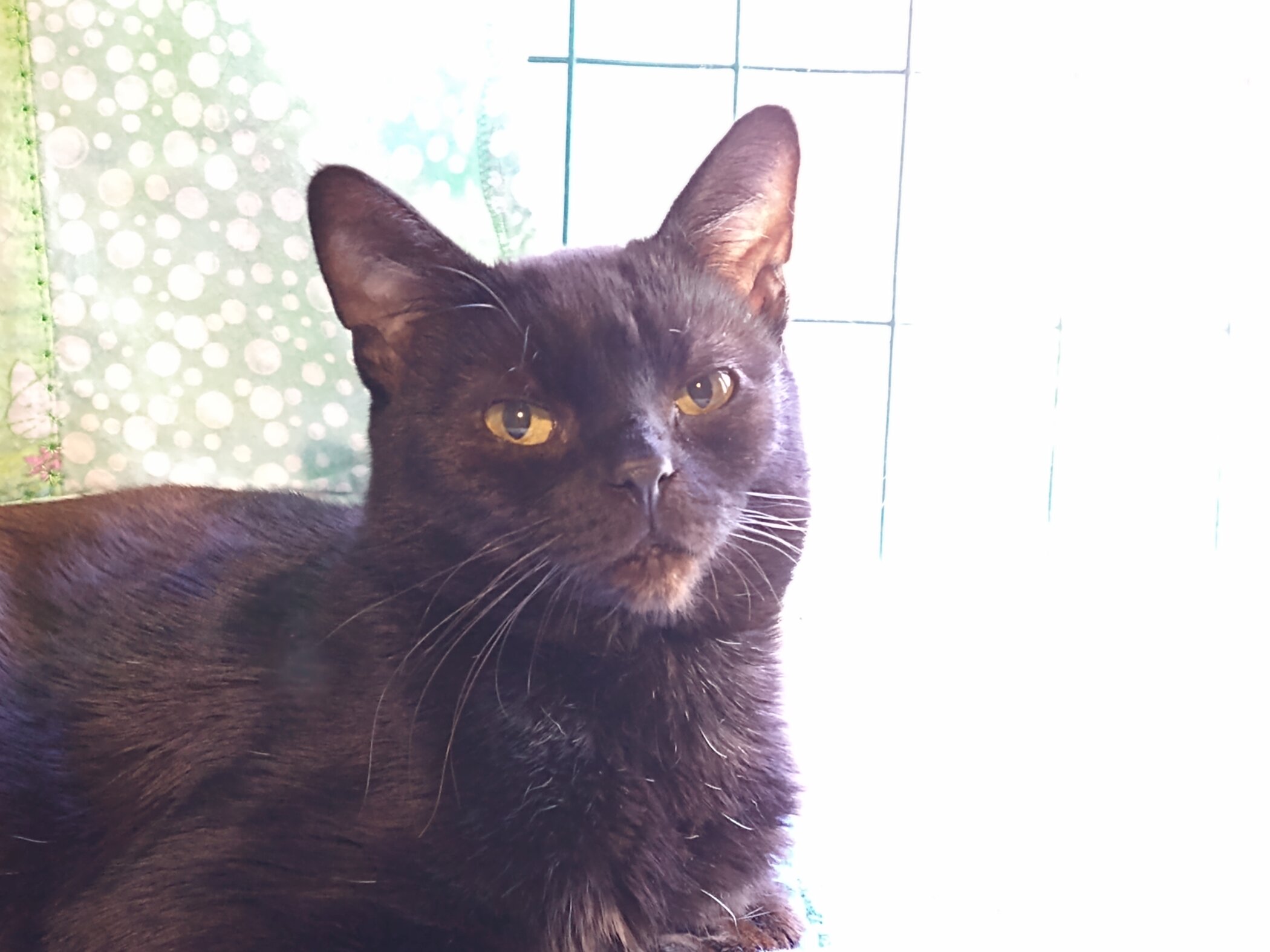 A potential adopter had been answering an ad for a cat that needed to be rehomed. When he went to the previous owner’s house to see the big black male cat Odin, Odin ran outside and into the street where he was struck by a car. His back end was run over, and he had to crawl out of the street on his front legs.

That was the unlucky part, but then the good luck began. Though the original owner wasn’t interested in doing anything for Odin, the new adopter was compassionate and immediately took him to an emergency clinic. Odin was found to have a shattered pelvis and a dislocated sacroiliac joint.

A bit more bad luck when the clinic gave an estimate of $5,000 to $7,000 for the surgery and care. The adopter couldn’t afford that, but—good luck again—there was a place he could take the injured cat where to get the care for free.

But there was a catch.

The Oregon Humane Society would give Odin the medical care he needed, but in order for that to happen, he would have to be surrendered to OHS. Odin wasn’t the only pet to find themselves in that situation. Many people who can’t afford expensive medical needs make the difficult choice to surrender their beloved pet for the sake of their health.

OHS had good reasons for this seemingly callous rule, a rule that has been traumatic for both people and pets, but now that’s about to change. Oregon Humane Society is adding four extremely important pillars of animal care to their services, and one will be a Community Teaching Hospital. Soon people like Odin’s adopter will be able to bring pets in for care at a price they can afford without having to surrender them. 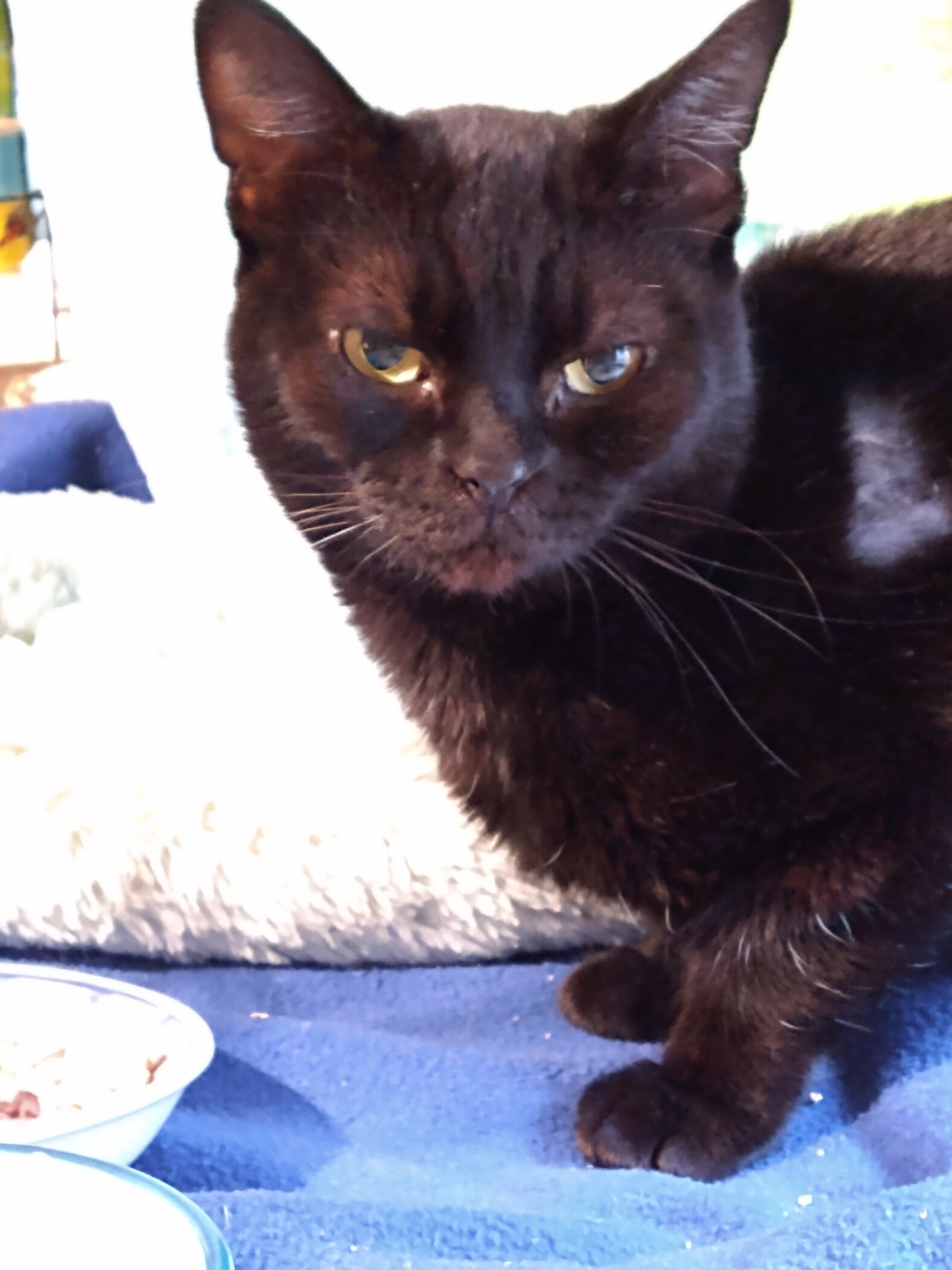 Here’s what OHS says about their groundbreaking project:

“The Community Teaching Hospital will be the first clinic in Oregon dedicated to offering accessible veterinary care to thousands of under-resourced clients and their pets. With rising housing, transportation, human health care costs and other unemployment and economic impacts, it is becoming increasingly difficult for families in our community to provide medical care to their pets. Even basic preventative veterinary care such as annual checkups and vaccinations can be expensive, but when a beloved cat or dog becomes sick or injured the medical costs can be out of reach for many families. The Community Teaching Hospital will offer services on a sliding scale to ensure pet owners can afford care and to help keep animals safe and healthy in their own homes.” —OHS Website-The New Road Ahead 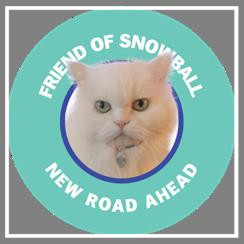 This project has been a long time coming. As a foster parent, I’ve cared for several cats whose families opted to give them up to save their lives. The most notable was Snowball, a fluffy white cat who suffered life-threatening injuries when, much like Odin, he escaped from his home and was struck by a car.

The story of Snowball:

“Snowball’s owner, Tom, couldn’t afford veterinary care and had to make the heartbreaking decision to surrender his beloved companion to OHS. Snowball received life-saving medical care at the OHS Holman Medical Center, and Tom checked on him by phone and in person every single day. Since OHS’s resources are intended for homeless pets, it isn’t typical that we provide care for animals owned by the public. However, because Tom never gave up on Snowball, it became clear that we had to make an exception and reunite them. This incredible human and animal bond is one of the many stories that inspired the New Road Ahead…” —OHS, Snowball Challenge 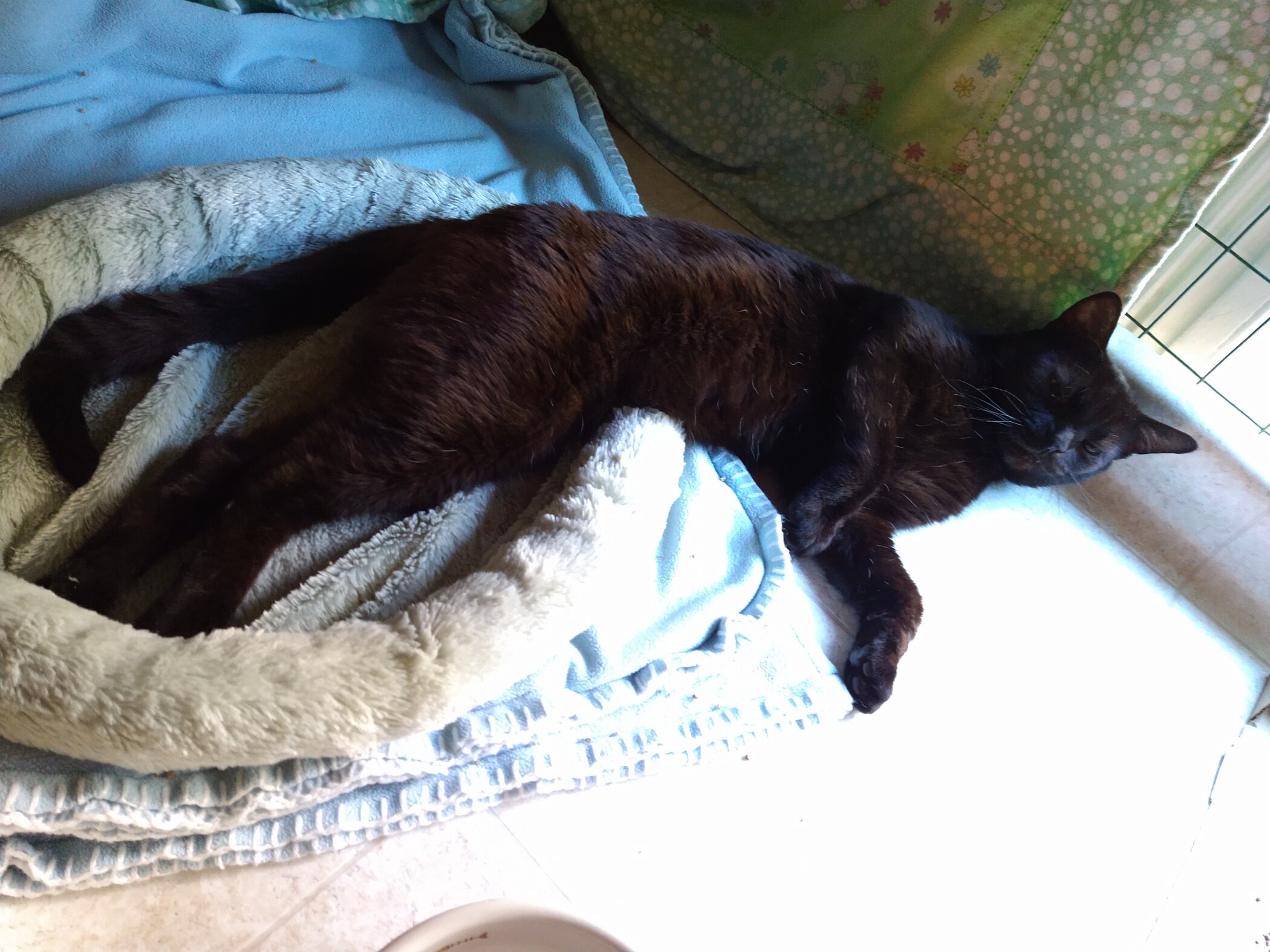 Odin is the luckiest unlucky cat around.

When Odin came into my foster care, he was still in a lot of pain. He couldn’t use is back legs, but that didn’t hamper his sunny disposition. Bit by bit, he’s been recovering miraculously. He’s still on kennel rest, but he can stand and walk around his little kingdom just fine. I’ve tried to make it nice for him. Besides a big window looking out onto a garden, there is Bird TV on a tablet and catnip pillows, which he loves. Lately I’ve added dangly strings from the top of the kennel that he can “fight” while lying on his back. He chirps and snuggles in spite of his ordeal.

I am so thankful to Oregon Humane Society, to Dove Lewis Emergency Clinic, and to the kind person who cared for him after his accident. If it weren’t for all three of those amazing forces, this wonderful cat wouldn’t have had a chance. He is truly one lucky kitty. 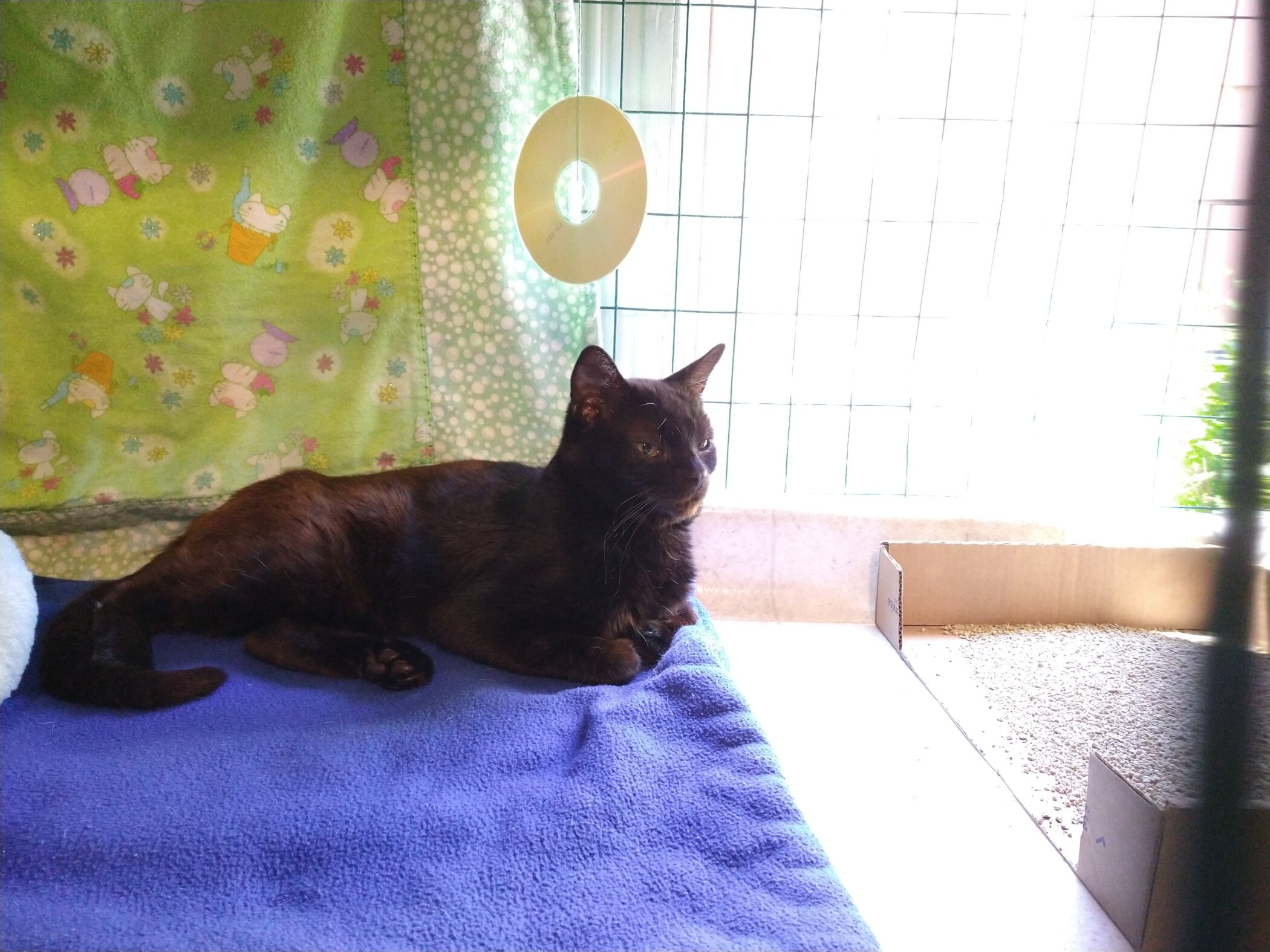 Native Oregonian Mollie Hunt has always had an affinity for cats, so it was a short step for her to become a cat writer. Mollie Hunt writes the award-winning Crazy Cat Lady cozy mystery series featuring Lynley Cannon, a sixty-something cat shelter volunteer who finds more trouble than a cat in catnip, and the Cat Seasons sci-fantasy tetralogy where cats save the world. She also pens a bit of cat poetry.

Mollie is a member of the Oregon Writers’ Colony, Sisters in Crime, the Cat Writers’ Association, and Northwest Independent Writers Association (NIWA). She lives in Portland, Oregon with her husband and a varying number of cats. Like Lynley, she is a grateful shelter volunteer.

You can find Mollie Hunt, Cat Writer on her blogsite: www.molliehuntcatwriter.com

2 thoughts on “The Story of Odin, The Lucky Unlucky Black Cat”