Please find below the latest entry in the icatcare Spotlight on Science series:

Mikel Delgado, a member of the iCatCare Feline Wellbeing Panel and feline welfare researcher tells us about her latest research on cross-sucking behaviours in orphaned kittens.

When I started working as a postdoctoral researcher at the School of Veterinary Medicine at University of California at Davis in the USA, I was quickly introduced to the Orphan Kitten Project (OKP). OKP is a student-run group that specialises in the care of neonatal kittens (<1 month old) who have been abandoned or otherwise separated from their mothers prematurely (note: these separations are accidental, by good Samaritans who find kittens and don’t realise that Mum is off hunting; increasingly, educational materials are aimed at helping people who find kittens determine whether it’s best to remove them or leave them be).

Orphaned neonatal kittens require specialised care, including round-the-clock bottle feeding. Unfortunately, there aren’t enough nursing queens available to care for these kittens instead, so veterinary students train and mentor foster caretakers from the community, while providing basic medical care for kittens under the mentorship of UC Davis faculty. Each year, hundreds of orphaned kittens in the Davis area are eventually weaned, dewormed, vaccinated, neutered, and then adopted into homes.

Because so many orphaned kittens are rescued by organisations around the world, we saw an opportunity to study the effects of early maternal separation on health and behaviour, without deliberately orphaning any kittens.  We started several studies and from our research and talking to foster caretakers, we soon realised that a major challenge in caring for these kittens is managing their cross-sucking behaviour.

Cross-sucking is the sucking on the body parts of co-housed animals. This behaviour has been extensively documented in agricultural domesticated species, such as cows and pigs, who are frequently early-weaned. Although cursorily mentioned in the veterinary pediatric literature, no one had yet studied this issue in kittens. 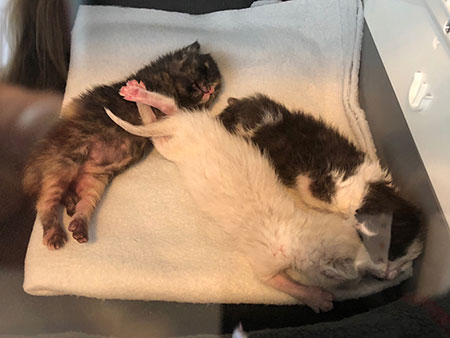 In one of our unrelated studies, we observed that 25% of the kittens began sucking on littermates! Many kittens were both suckers AND victims of sucking. Foster caretakers in the study had great difficulty in managing the behaviour, often resorting to separating kittens from their littermates. Due to this experience, we decided to investigate this behaviour in more detail. The results were recently published in the journal, Applied Animal Behaviour Science.

The aim of our study was to collect data from people who were currently fostering kittens – but because we wanted to compare populations, we wanted data on litters with and without cross-sucking behaviours, and from both orphaned and mother-reared kittens. To reach as many foster caretakers as we could, we conducted an online survey. We first asked participants to give us detailed information about each kitten in their foster litter, such as their estimated date of birth, sex, and current weight. We wanted to know if the kittens were still with their mother, and whether or not the kittens were sucking on littermates. If so, we wanted to know which kittens in the litter were suckers, and which were victims. 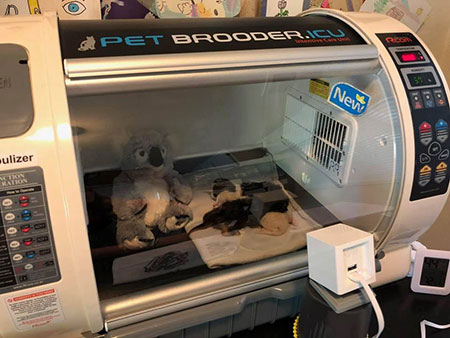 We asked questions related to feeding, such as the frequency of feeding, types of food fed, and whether kittens were weaned. We also asked questions about the environment, such as the ambient temperature, the types of noises kittens were exposed to, and the lighting. We also asked about how caretakers interacted with kittens, such as grooming and handling. For litters with sucking, we asked several questions about the sucking behaviour, such as what body parts were being sucked on, behaviours observed during sucking, how the behaviour was managed and whether the kitten experienced any medical issues due to the sucking.

We collected data from 407 foster caretakers, representing 1358 kittens. Our main findings were that being orphaned was related to an almost six times higher risk of sucking behaviour compared with mother-reared kittens. Other factors that increased the likelihood of sucking in a litter included being currently bottle-fed, being separated from the mother at an earlier age, and being part of an all-male litter. Male kittens were more likely to be victims of sucking behaviour, although male and female kittens were equally likely to be suckers. The genital area was the most frequent target of sucking behaviour, likely because to a kitten searching for a nipple, the penis is a similar stimulus.

Unfortunately, about 10% of caretakers reported that kittens experienced a medical issue due to sucking, such as skin injuries in the victim, or digestive upset in the suckers, who may stimulate elimination in the victim and as a result consume urine or faeces. Some kittens need surgical reconstruction of their urethra (PU surgery) and on rare occasion kittens need to be euthanised due to injuries sustained during sucking, as was reported by two participants in our survey.

We were surprised to find no clear associations between any of the environmental factors or care practices of fosters and the presence of sucking in a litter. So rather than focusing on changes in caregiving, we are currently testing whether a “surrogate” stuffed animal with nipples can redirect some of this sucking behaviour. Current management strategies, such as clothing or separating the kittens from their littermates may pose ethical concerns, and do not address the underlying motivation for the behaviour. Because cross-sucking is so difficult to stop once it has begun, preventative strategies are important.

Even when mammals nurse on mothers, there are extensive periods of non-nutritive sucking, where no milk is released. Non-nutritive sucking helps explains why kittens continue to nurse on their littermates; the behaviour likely provides comfort even if it does not always provide milk! 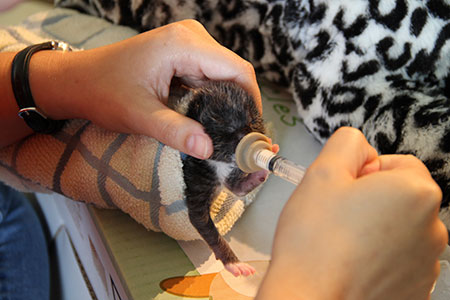 In the future, we would like to look at other factors we suspect might be related to sucking, including the condition of the kitten when rescued, how stress responses of individual kittens might help us understand the tendency to suck, as well as possible genetic factors that might be an influence. Since not all kittens within a litter become suckers or victims, it could be helpful to explore what protective influences might be at play.

One thought on “Spotlight on Science: Cross-Sucking Behaviour in Kittens”