The domestic cat’s sense of smell is far greater than ours and they rely on their sense of smell to navigate their environment and communicate with each other.

Whilst we traditionally consider adding physical items such as puzzle feeders or play items to provide environmental enrichment for our cats, we often forget that for cats providing stimulants for their sense of smell can be another way of providing such enrichment. Different varieties of plants have been found to have a positive effect on cats and we discuss them in greater detail below.

Catnip (Nepeta cataria) is the most commonly known plant used in its dried form in many products such as toys, sprays and as attractants to scratching posts. Anyone who has seen a cat react to catnip knows that this plant can cause quite a reaction in our cats! The response is caused from a cat simply smelling the plant, which releases a chemical called nepetalactone that cats are able to detect with their incredible sense of smell. This leads to a range of behaviours such as sniffing, licking, biting, facial rubbing and body rolling being performed. Not all cats react to catnip however, with 50-70% of cats showing no reaction due to the response needing to be genetically inherited.

Catnip has been found to illicit behaviours that indicate a positive welfare state, such as increased play, in a study of cats exposed to catnip in a rescue centre environment. Very little research to date has focused on the effects of catnip on the cats although it is generally believed to be safe, non-toxic nor addictive for cats. However, catnip is psychoactive meaning it primarily acts on the central nervous system leading to changes in brain function which can temporarily alter mental processes. In humans, when smoked, catnip has caused hallucinations. Therefore, whilst we assume that cats are having a positive experience, we do not know the true effect catnip has on cats.

Have you ever witnessed any negative reactions when your cat was exposed to catnip? Or do you think your cat has an enjoyable experience during exposure? 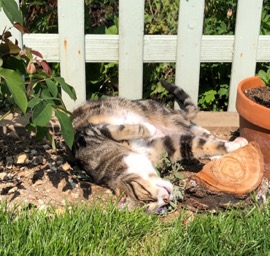 Other plants which have been found to illicit a similar response in cats have been found to contain similar components to catnip. These include silver vine (Actinidia polygama), valerian (Valeriana officinalis) and Tatarian honeysuckle (Lonicera tatarica). Silver vine is a commonly used alternative to catnip in Japan but is less well known in other countries. In a study of 100 cats, 80% of the cats exposed to silver vine and 50% of the cats exposed to valerian and Tatarian honeysuckle responded with the same behaviours that are typical of the response to catnip. Of the cats in the study that did not respond to catnip, almost 75% responded instead to silver vine, 31% to Tatarian honeysuckle and 19% to valerian suggesting that silver vine may make the best alternative to catnip for those that do not respond to catnip. As with catnip, these plants are all considered safe and non-toxic to cats.

Another use for plants can be to attract a cat to use a scratching post or board. A recent study on 36 adult cats found that both catnip and silver vine when applied to scratch posts or boards increased the amount of time the cats spent scratching, as well as increasing the number of times the cats scratched on the scratchers. This can be helpful to encourage cats to use a scratcher and prevent unwanted scratching in undesirable locations. For further advice on problem scratching behaviour please see our article here.

You may have also noticed that your cat likes to nibble and chew on blades of grass if they have access outside. Providing cat grass (common oats) for indoor only cats can be a great way to enrich their environment as many cats seem to enjoy eating grass. Why is this? We don’t fully understand what drives this behaviour as cats are obligate carnivores, meaning they need to eat meat to survive, with no need to eat plant-based materials. There has long been debate as to whether there is a biological reason for cats being motivated to eat grass, but it may simply come down to the fact they enjoy the taste and texture! Cat grass can easily be grown from seed in a pot or tray so it’s very easy to provide some for our pet cats.

Whilst these plants are all safe for cats to enjoy eating and smelling, there are many plants that are toxic or potentially harmful to cats if ingested. A list of poisonous plants can be found here.

Carefully selecting certain plants to grow in your garden, balcony or even on a windowsill can provide extra sensory experiences for our cats so consider growing some of these plants for your cat to enjoy!