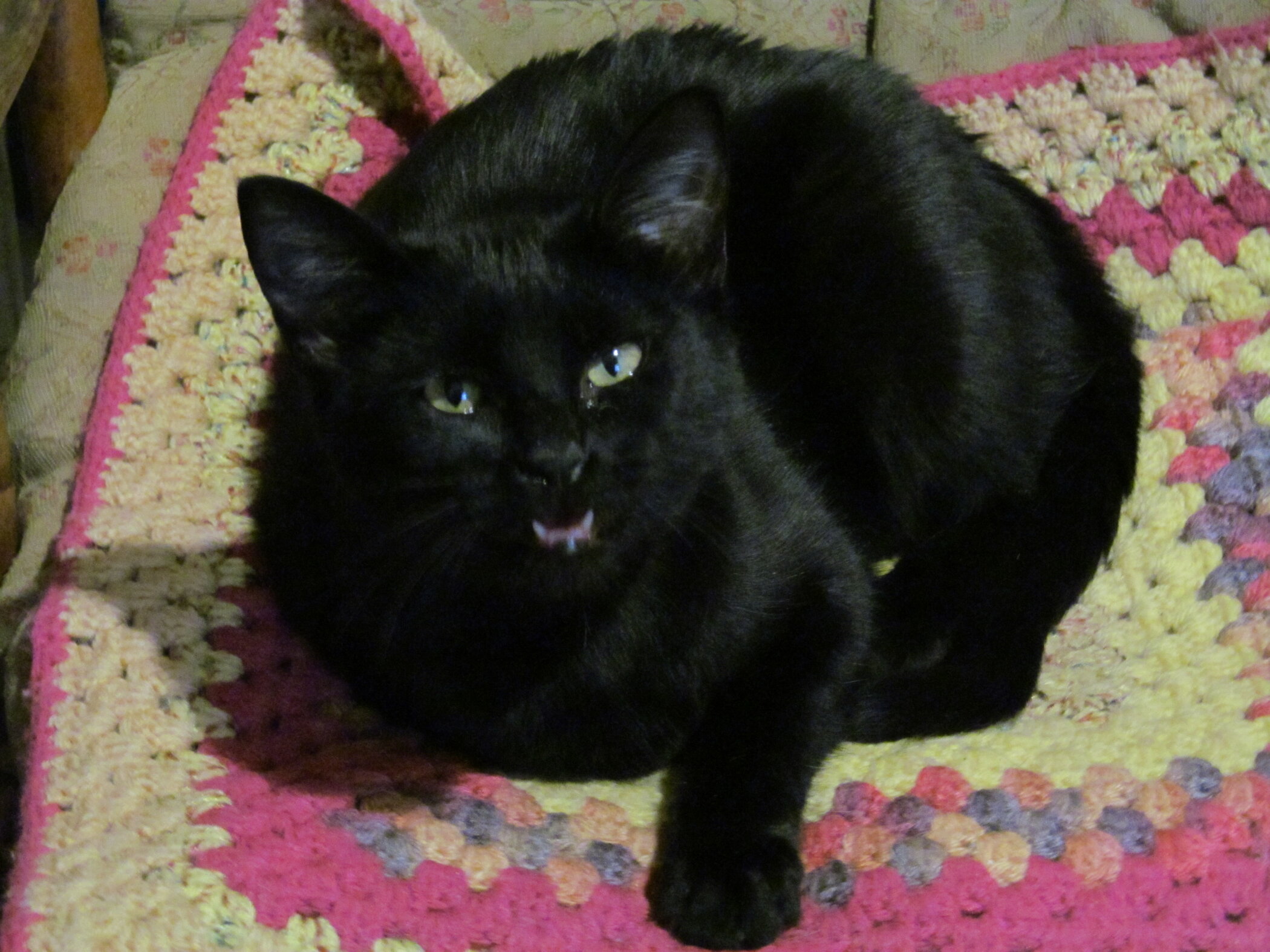 I am an omnivore. In the past, I’ve been a vegan, a vegetarian, a pescatarian, and a macrobiotic, but at this point in my life, I’ve found it prudent to be flexible. Whether traveling in other countries or visiting people here at home, it’s simplest to eat what is offered. Since my husband eats meat— and cooks it for me— I accept it graciously. When I cook vegetarian meals, he does the same.

I won’t cook meat myself because, yuck! (Also because I ruin it.) And when it comes time to feed the cats, I have a certain amount of yuck factor there as well. This is what started me wondering how true vegetarians and vegans reconciled the conundrum of feeding their cat meat. I reached out to my vegan/vegetarian friends and acquaintances, and I learned a lot.

What does it mean to you to be vegan/vegetarian?

First off, I asked my little group of ailurophiles to explain what being vegetarian or vegan meant to them. Why were they moved to limit their lifestyles so drastically? Most answered with variations on the theme of not wanting to take part in animal cruelty and suffering.

Adriana answers neatly, “Being vegan is all about reducing animal suffering.”

“For me, it’s about doing the least amount of harm in the world as I can…” Leslie replies, going on to add, “…with the understanding that the amount will never be zero no matter how hard I try.”

I found that statement particularly thought-provoking. Much of the ridicule aimed at veg/vegans points to some flaw in their practice. Maybe they own a pair of leather shoes or eat figs. My question is, why should non veg/vegans expect such absolute perfectionism?

How do you reconcile your cats’ need for meat with your vegan/vegetarian philosophy?

The people I talked to are serious cat people, and most agreed that since cats are obligate carnivores, meaning they need meat to survive, feeding them a healthy diet is just part of the deal.

I tend to agree with Leslie when she says, “I can see why some meat-eaters consider it hypocritical for vegans to have cats and feed them meat. But I also think those criticisms come from a place of defensiveness; it’s easier to criticize those of us who are trying to limit our negative impact than it is too seriously look at what harm meat-eaters are causing…. By (their) logic, it makes no sense to even try. If you can’t be perfect, then you might as well just kill as many animals as you want.”

“It is definitely uncomfortable to be vegan and still have that unbreakable link to the slaughterhouse,” she goes on to say. “It’s something I struggle with. There are vegan pets such as rabbits and guinea pigs for those who can’t deal with this, but I love cats.” (Leslie has a magnificent clowder of senior and special needs cats.) “I do what I must to give them the best quality of life for however long they have left despite my discomfort.”

Adriana brought up another point. “Keeping my cats indoors and not letting them hunt is a way (of compromising). By providing them with all the nutrients they need to be healthy reduces animal suffering too, in this case, their suffering.” She also mentions that cat food is often made with meat by-products, so animals are not specifically killed to make it.

Cathy has gone a whole different direction. “I decided to try my cats on a vegan diet…  I learned that although cats require a high protein diet and certain essential nutrients, it is possible to formulate a healthy and tasty diet for them that does not include animal products. Many of our cats have been vegan for more than 10 years and are doing fine.” Cathy does mention that she also has cats who are on prescription non-vegan diets for medical issues.

Before talking with Cathy, I would have insisted the only healthy diet for cats must include meat, but as she explained to me the complex mixture of protein and nutrients supplied in the cat food she makes and buys, I will have to reconsider.

What foods do you feed you cat and why?

So the next step was to find out what these veg/vegans did feed their cats.

“A high quality food… the expensive stuff. Wet food mostly,” Elisa says, echoing what many cat people feel is the right diet for their furry cohabitors.

“I have seven (senior) cats and they are on different diets,” Leslie explains. Leslie lovingly tailors meals for each individual cat, depending on their special needs. “Senior cats often don’t eat enough so I’m always looking for ways to get more calories and water into them… One of those cats has chronic kidney disease so I add half a can of water and half a scoop of protein powder to his meals. The seventh cat has inflammatory bowel disease, and she eats a limited ingredient diet.” Leslie tries to choose foods “that do not include problematic ingredients and (are) transparent about what they put into their food.”

Cathy, as she said before, feeds a complex vegan diet, but she adds, “I am excited that a company called Bond Pet Foods is working to make cat and dog food from In-Vitro meat (meat proteins derived from animal cells— no slaughter required) so we can have animal protein without the animal. Hopefully this will be available some day in prescription diets.” Adriana also mentioned In-Virto meat, saying she will use it for her cats when it becomes available.

What else would you like to say about veganism and living with a cat?

Cathy again brings up the issue of progress verses perfection. “I realize that some cats are very finicky eaters, so what my ones are eating might not work for everyone. I’m not trying to impose a vegan diet on anyone’s cats, just wanting to get it out there that it can be possible. Another option is that some cats might be willing to be flexitarians. Every little bit of harm reduction helps.”

Adriana says, “As a vegan, I feel good my cats are protected and the wild fauna around them as well by keeping them indoors.”

Leslie states, “I love my cats so I feed them the diet that is best for them. I love all other animals as well, and since I can not only survive but improve my life by eating plants instead of eating their dead bodies, that’s what I do for myself.”

What other questions should be asked?

Often in an interview, it’s best to let the interviewees ask and answer their own questions. After all, who is more qualified to tell us what we want to know?

The debate on feeding vegan continued with Elise saying, “I guess to make sure that people know that they can harm or kill their cats if they don’t feed them animals,” and Cathy countering, “Perhaps ask if people would be willing to try their cats on vegan cat food.”

To some extent, both are right: Absolutely, without the correct diet, cats will suffer and die, but apparently for some cats, that diet can be attained from sources other than meat. I want to impress that, in my opinion, veganism for cats is neither simple nor inexpensive. Cats must be watched and checked regularly by a vet to make sure they are maintaining their health.

Leslie wanted to leave us with an observation:

“If we treated cats and dogs the way we treat cows, pigs, chickens, turkeys, etc., people would be up in arms. Labeling some animals as “food” does not change the way they experience their lives: they feel pain, grief, despair and fear, just as our pets do. The fact that torturing and killing them is legal while rescuing them from confinement and death is illegal says nothing about what is right or wrong.

The major difference between vegans and others is that we don’t put a box around our compassion and find ways to exclude some living beings from it. The thing that annoys me the most is that we are considered weird, while those who justify torture and killing think of themselves as normal… I am more bothered by the fact that my family members and most of my friends refuse to even consider these points.

Cats are just being cats and they eat what their biology requires. People have the capacity to think and realize what they are doing if they would just open their eyes and stop being defensive about their choices. I wasn’t raised vegan, but I do ascribe to what Maya Angelou said: “I did then what I knew how to do. Now that I know better, I do better.”

Are you a vegan or vegetarian cat guardian? If so, I’d love to hear how you handle the feeding of your cats.

About Mollie Hunt: Native Oregonian Mollie Hunt has always had an affinity for cats, so it was a short step for her to become a cat writer. Mollie Hunt writes the Crazy Cat Lady cozy mystery series featuring Lynley Cannon, a sixty-something cat shelter volunteer who finds more trouble than a cat in catnip, and the Cat Seasons sci-fantasy tetralogy where cats save the world. She also pens a bit of cat poetry.

Mollie is a member of the Oregon Writers’ Colony, Sisters in Crime, the Cat Writers’ Association, and NIWA. She lives in Portland, Oregon with her husband and a varying number of cats. Like Lynley, she is a grateful shelter volunteer.

You can find Mollie Hunt, Cat Writer on her blogsite: www.lecatts.wordpress.com