In Morocco, although kittens are sometimes born into secure environments and spend their first few weeks in the warmth of their mothers care, they are usually ‘unwanted’ by the cats owners and are often ‘thrown out of the house’ – abandoned and left to fend for themselves long before they are old enough to do so. Many Moroccan cat owners are not aware that sterilisation is possible. They also feel that it might be against their religion and it’s highly likely that they wouldn’t be able to afford to/want to pay the vets fees even though it would resolve the problem of the continual arrival of unwanted kittens. 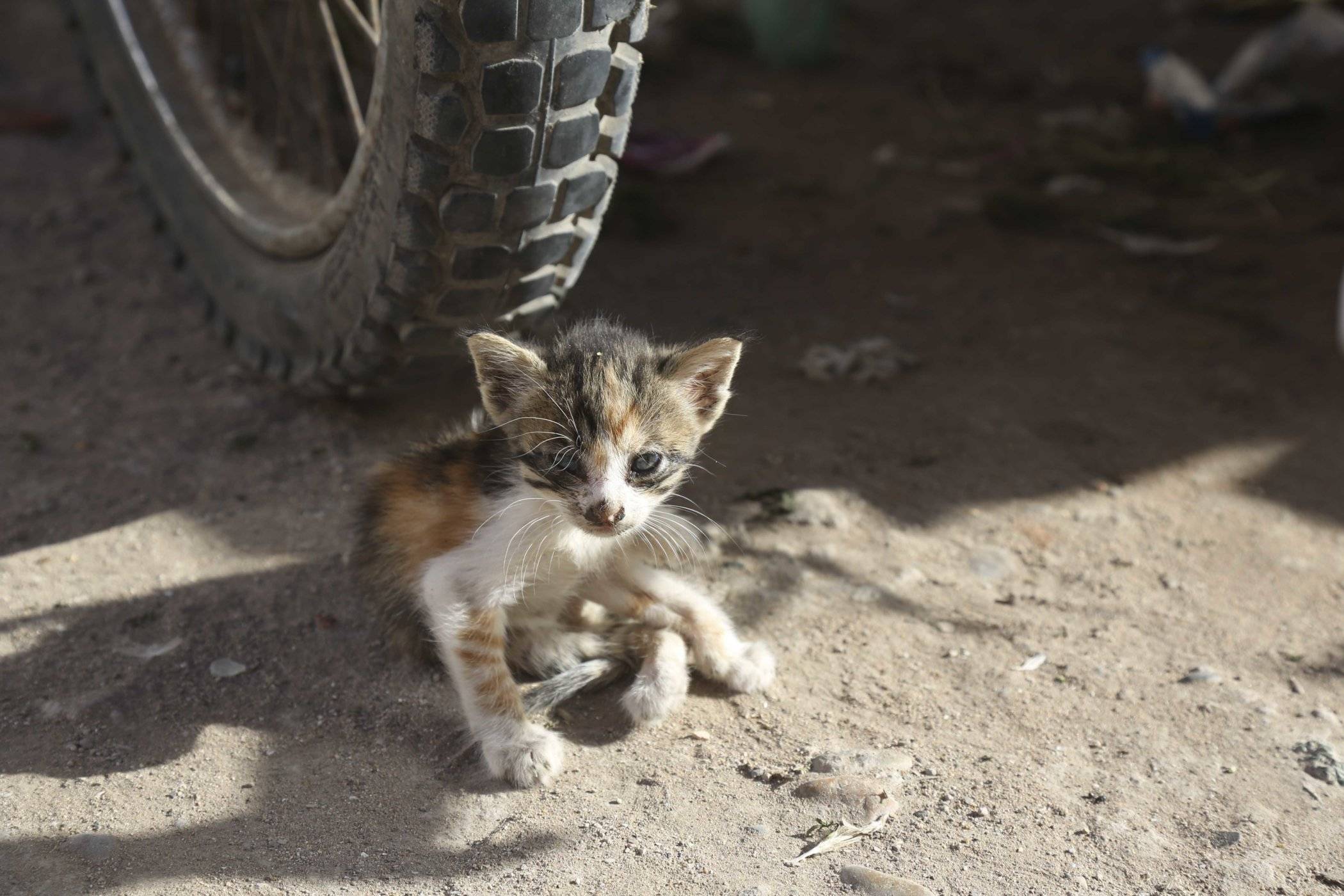 One such kitten was Foxy. ‘Dumped’ in the ancient medina of Azemmour close my house, his pitiful cries were heard by me and my blind cat Beauty and we both rushed outside to find him. Beauty reached the kitten first (he never ceases to amaze me) they rubbed noses and he tried to comfort the tiny mewing frightened new friend who stood little chance of surviving alone. We took him home of course and he spent most of the next week snuggled in my scarf purring. That was 6 months ago. Now fully vaccinated and on June 22nd will make his long car journey to London for adoption at Catfest.

Having recently witnessed a heartbreaking ‘kitten dumping’ problem on the rubbish tip in Azemmour, it became clear that adoption outside Morocco was the only way forward. ERHAM ( a charity I founded in Morocco) already has a sterilisation programme in place, but it will take a few more years to have the impact needed. Meanwhile, the dumped kittens need or help and they need homes. ERHAM means ‘take pity’ in Arabic and we spread the word believing in ‘Cats without borders’. Soon I will embark on my first importation of kittens with thanks to London’s Catfest Meow parlour and Agria Pet insurance.

Zien and Zweena were rescued from that rubbish tip last December in the rainy season when a vulnerable kitten stands little chance of survival. It was clear that they had been newly abandoned as they were lost and frightened and the malaise of a few days at the dump hadn’t settled on them. They came home too, but with a plan in mind. Many vaccinations and blood tests later and after the required 3 months wait, they are ready for their big adventure and are coming to Catfest adoption Parlour to look for a loving UK home. They are now very intelligent, loving and playful 7 month old kittens.

Beauty, my blind cat is my biggest love. He was found abandoned by some rubbish bins with severe eye infections and at 5 weeks old, was already blind. He was with his brother at the time; both cowering and terrified. I scooped them up, just before it poured with rain and wrapped them tightly in my scarf to carry them home while they both tried to bite me and escape! By choice they spent their first week in a cupboard, taking food from my hand while swearing at me in-between mouthfuls. Even at 4 months old, they were still scared of people but when I finally managed to gently stroke Beauty, he pushed against me, realising that it felt quite nice, and immediately wanted more. It was step by small step with Beauty until he became a loving, affectionate and courageous cat. He is far too confident for his own good given his disability, loves to go out side and is as mischievous as the best of them! But he needs a more secure home and loves human companionship which he lacks when I’m in the UK. Beauty is travelling to the UK on the 23rd June with Foxy, who be knows well, and the other Catfest kittens. Shadow his companion will be following on a few weeks later to be reunited with him.

Shadow was just clever. He lived outside my house and came asking for food sometimes. At 12 weeks old he seemed to be managing ok. Then he met Beauty. He used to wait by the door for him to come out to play and seemed to be constantly watching him; looking out for danger as if he knew that Beauty couldn’t see. Then one day I watched as an amusing conversation seemed to take place between them with Beauty calling Shadow towards the house and into his box where they snuggled up together and have been inseparable ever since. Together they are looking for a very, very special new home in the UK or France.

To adopt any of the above kittens, or Beauty and Shadow (will always be together!) please get in contact with Anne Heslop on 07956 549099 or message here: www.facebook.com/ERHAMCATS

If you would like to donate to our sterilisation programme please do here: www.justgiving.com/crowdfunding/erham

2 thoughts on “Rescued From a Life of Suffering in Azemmour, Morocco and Coming to Catfest Meow Parlour for Adoption”