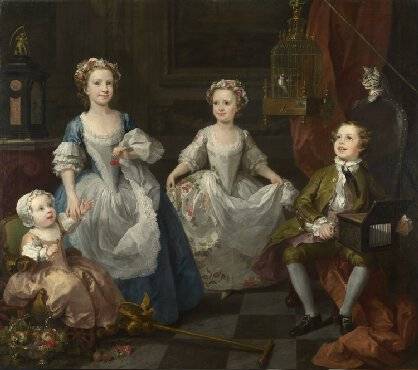 You might be forgiven for thinking where is the cat in this picture of a bunch of children?  But suddenly you see it – the tabby cat on the right ready to pounce on the goldfish! 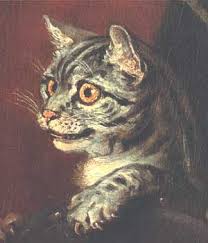 The young boy on the right is playing a music box or “serinette” decorated with scenes of Orpheus, whom according to Greek legend charmed animals with music.  Unaware of what is going on behind him, he smiles at the caged goldfinch – which is perhaps chirruping in accompaniment, or flapping its wings in an attempt to escape.

Despite this excitement, the clock on the mantelpiece is decorated with the figure of Cupid holding a scythe and standing beside an hour-glass, symbols of death.  We know that the baby was dead when the portrait was painted, and this must account for the sombre references to mortality, at a time when many children died in infancy.

Hogarth was born in 1697 near the East End cattle market of Smithfield. His father, Richard Hogarth, made an unsuccessful attempt to open a Latin-speaking coffeehouse, which left the family bankrupt, Richard confined to Fleet Prison, and the young William fending for himself.

After apprenticing at a silver workshop, where he mastered the art of engraving, Hogarth opened his own print shop. The artist’s first widespread notice came with the publication of The South Sea Scheme (1721), ridiculing the greed and corruption of stock market speculators. A Harlot’s Progress (1732) – which also features a cat – brought Hogarth tremendous success and celebrity, leading to a second morality series, A Rake’s Progress (1734).

Throughout the 1730s and 1740s, the artist’s reputation grew and so did his interest in social and moral reform. Hogarth’s work took on a distinctly propagandist tone, directed at the urbanization of London and the city’s problems with crime, prostitution, gambling, and alcoholism.

Hogarth died in 1764 in his home in Leicester Fields, leaving behind an extraordinary legacy. Working almost entirely outside the academic art establishment, he revolutionised the popular art market and the role of the artist. Hogarth strived to create works of great aesthetic beauty but also ones that would help to make London a better city for future generations. 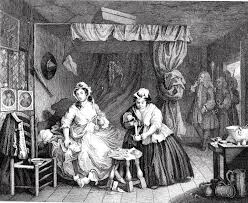