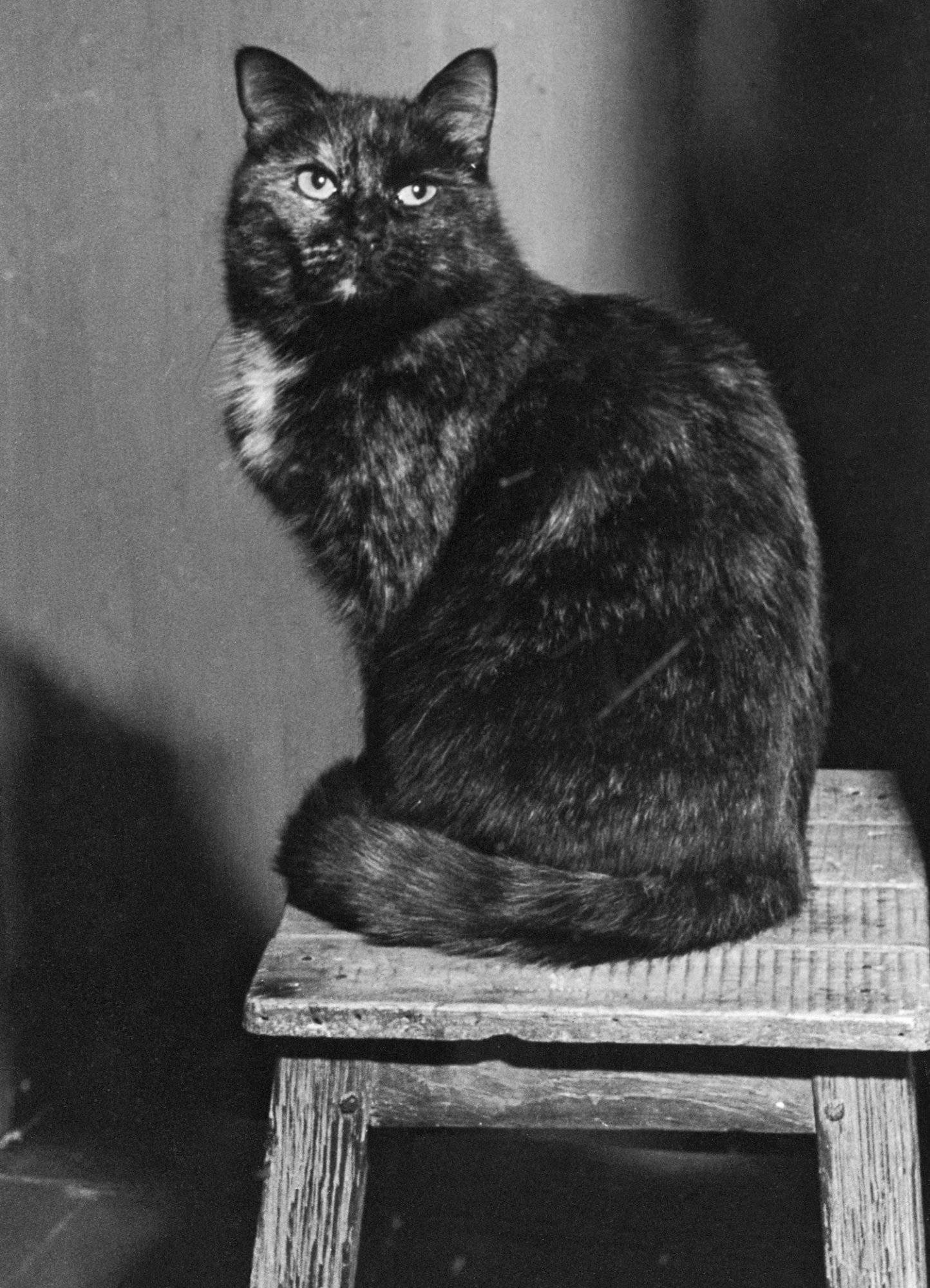 For as long as there have been kitchens, there have been kitchen cats: rodent hunters, defenders of the pantry, guardians of the warmest spot by the hearth, always on the look out for a stray piece of meat or fish. Any good kitchen cat can be cosily asleep one minute and slinking stealthily the next. They introduce surprise, playfulness, and the unexpected into any situation. It comes as no surprise then that the kitchen cat has always been a favourite of artists; representing vitality, grace, and a certain joyful rebelliousness. Here, picked out from across five centuries, are a few of my favourite kitchen cats in art and culture. 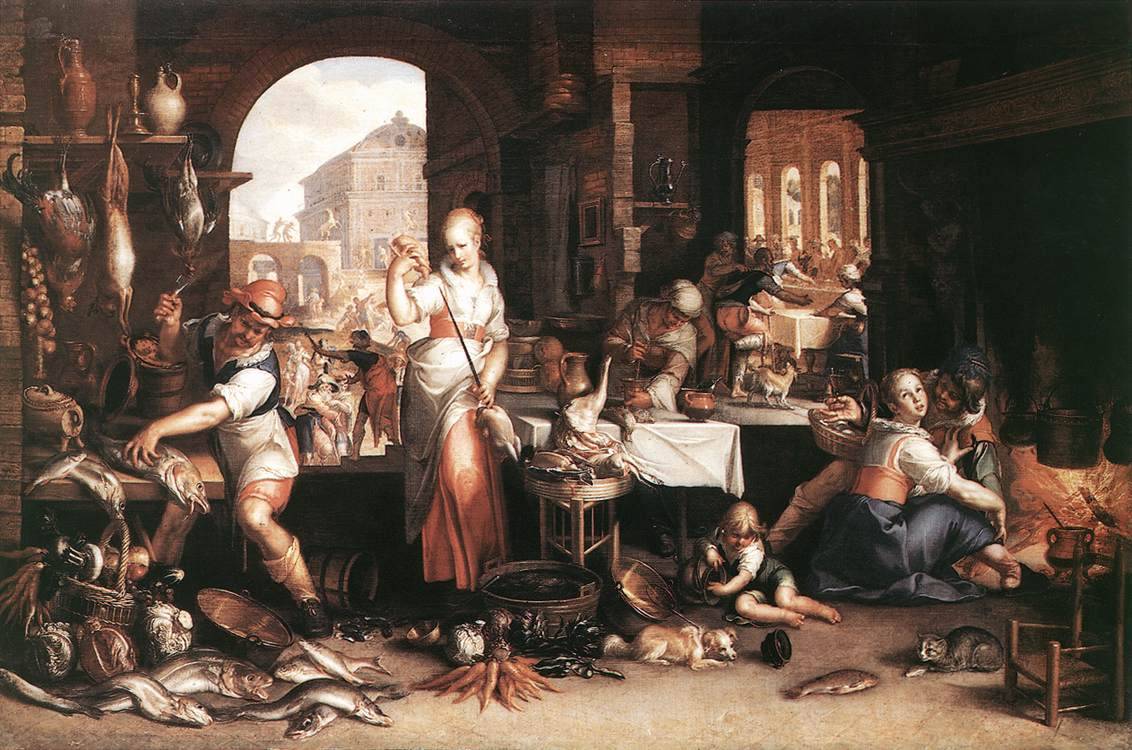 The earliest painting I’ve chosen, from 1605, is by Dutch mannerist painter Joachim Wtewael. It shows a busy kitchen, preparing what looks like a feast of fish, fowl and vegetables. Of course, a kitchen wouldn’t be a kitchen without a resident cat, preparing to fight a dog for a forgotten fish…

It’s the tiny details like the cat’s outstretched paw and pinned back ears that give this scene its vibrancy, its sense of bustle and life. 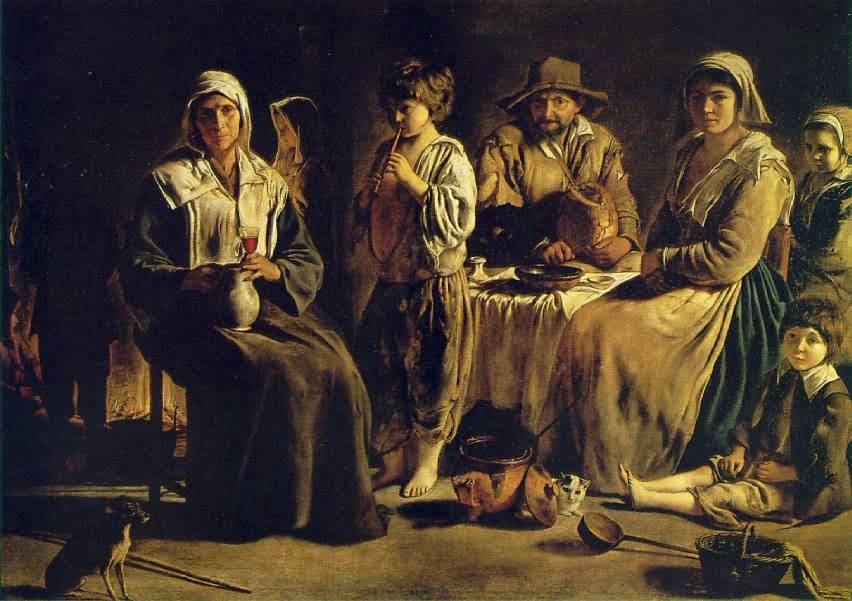 From a grand kitchen to a humble one. Le Nain’s 17th century work depicts a peasant family, seated in their kitchen, surrounded by the paraphernalia of their everyday lives; pots, pans, jugs, baskets… and an opportunistic kitten, peeping out from behind a tureen, waiting, once again, to beat the dog to a scrap of food. 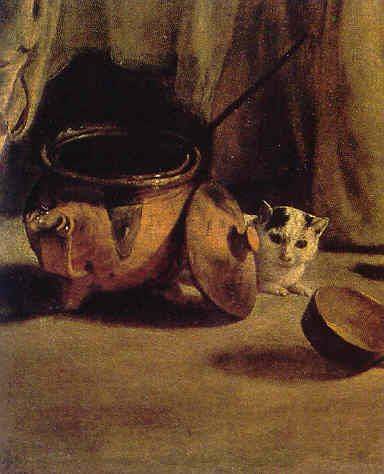 3. Jean-Baptiste Chardin, The Ray or The Kitchen Interior (1728) 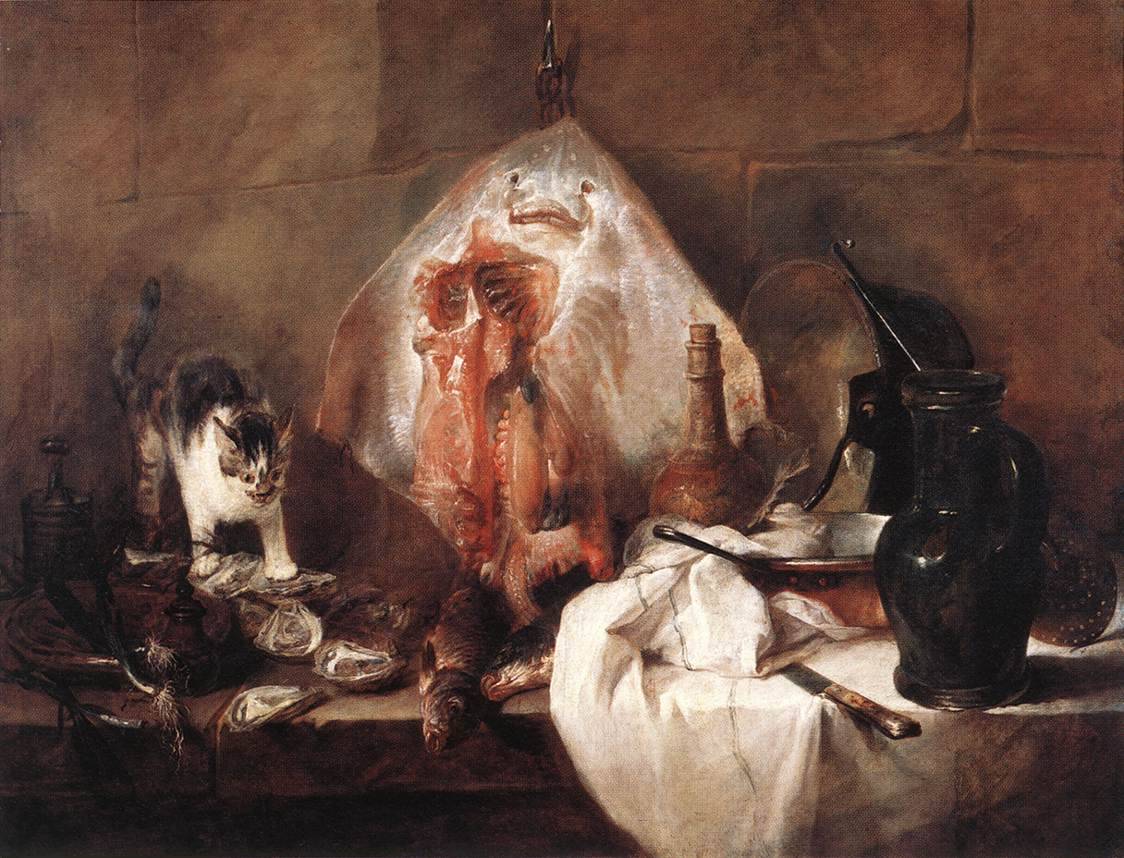 Moving on the next century, we encounter master painter Jean-Baptiste Chardin. This strange, visceral painting astounded the artistic establishment of the time, and has enthralled artists ever since, from Matisse to Proust. The figure of the kitten, caught in the act of hissing or leaping onto the spilled oysters, brings the element of movement and alarm to the static meat and utensils of the kitchen, and is part of what makes this painting truly remarkable.

It’s a trick Chardin repeated twice more in different paintings from around the same time; in each, the bright-eyed, feline quickness of a cat breaks the still life, and contrasts with the vivid, immobile flesh of a half-butchered piece of fish. 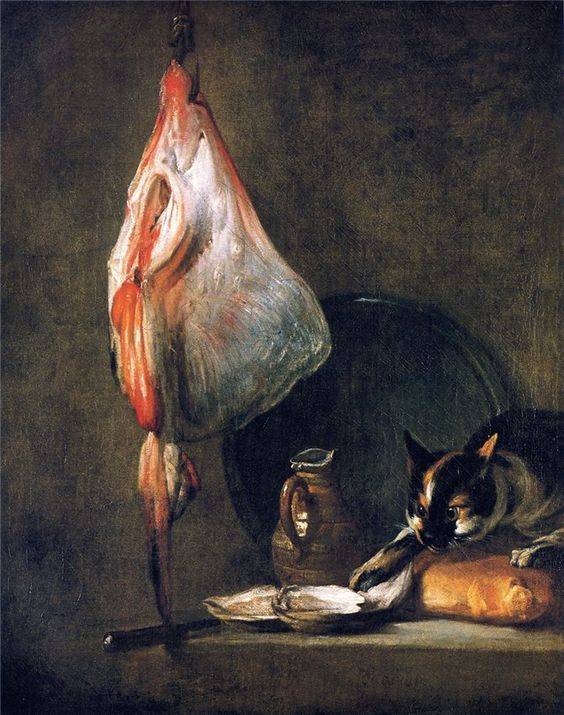 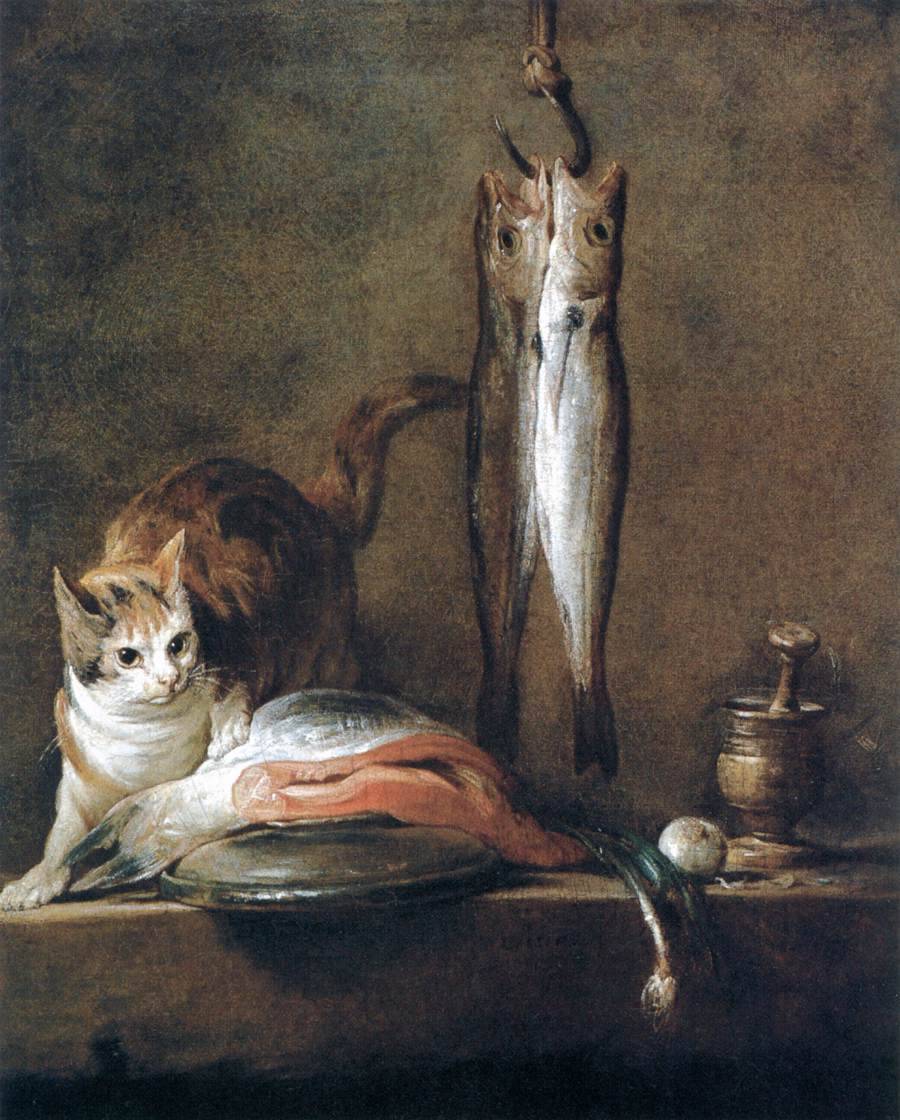 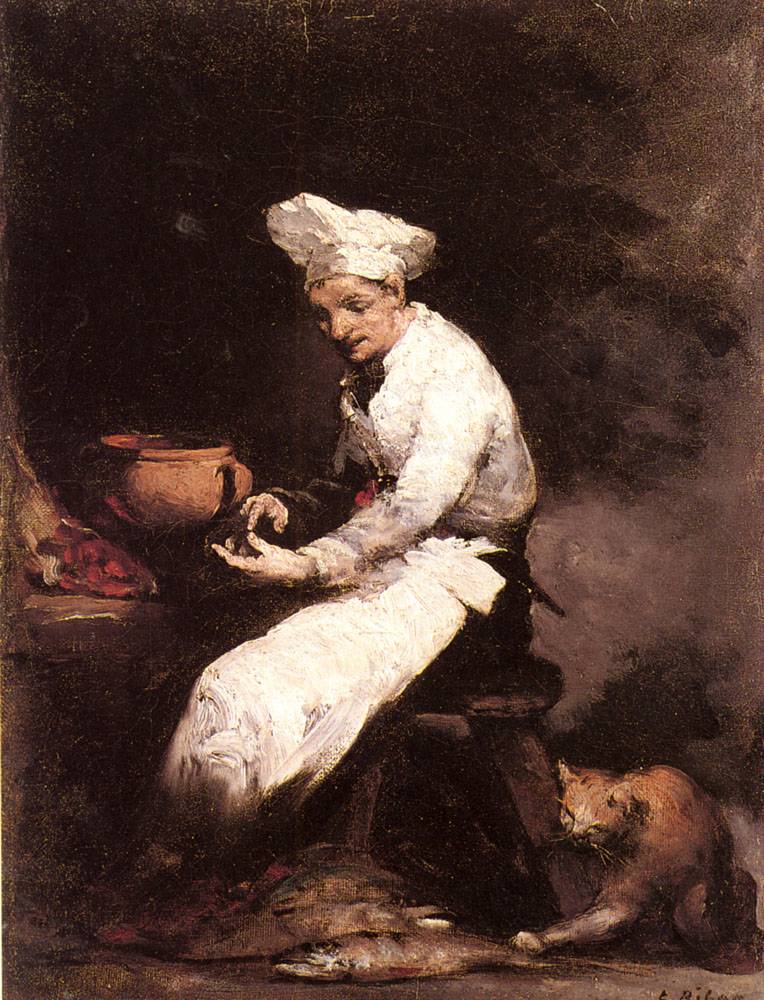 Whisking forwards over a hundred years we encounter another French realist painter, Théodule Ribot, and his depiction of a sneaky ginger Tom trying to nab a fish from an unsuspecting (or kindly) chef. Again, we see an artist choosing to use a kitchen cat as the active, driving force of a painting; we get the impression that the chef is pausing in his work, looking out of the corner of his eye as the cat’s paw extends slowly towards the fish. 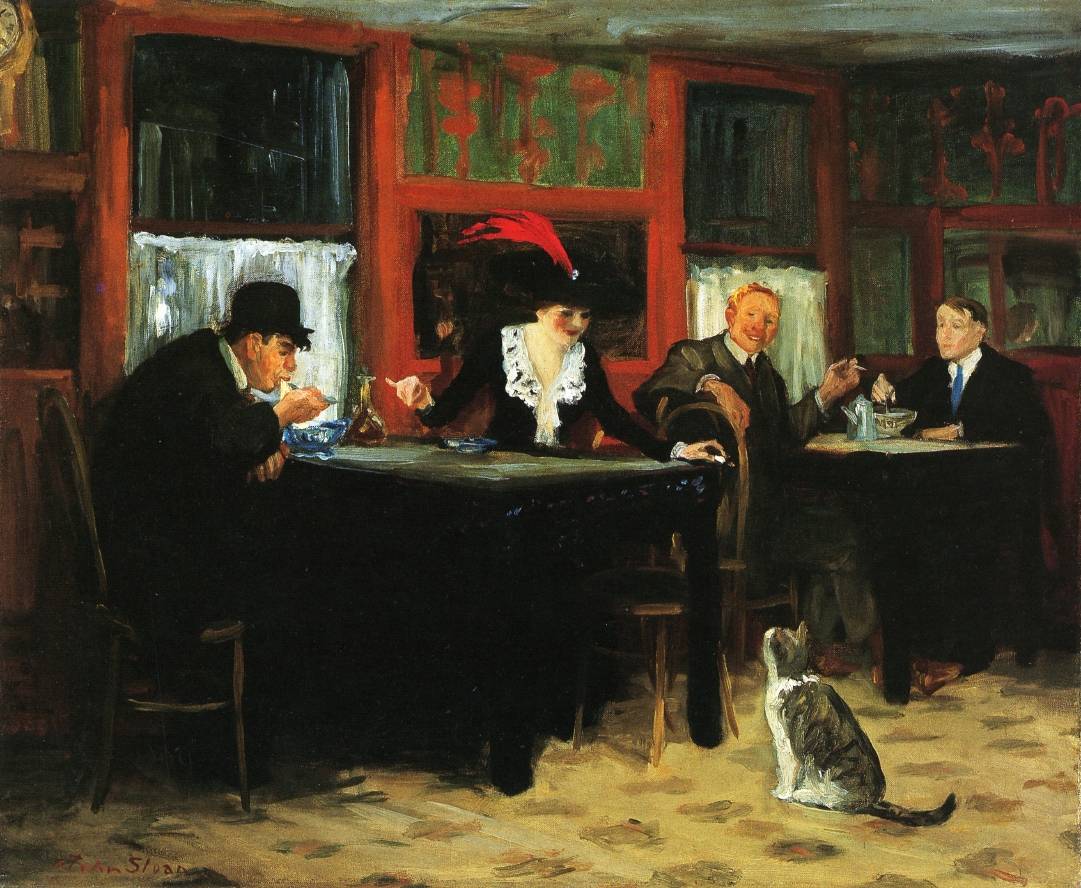 Sliding into the twentieth-century, we encounter John Sloan, an artist who was part of the “Ashcan” painters, so called because they often chose to focus on the everyday lives of the lower classes. Setting a painting in a Chinese restaurant was a political as well as aesthetic choice that would have been unthinkable to other more traditional painters. But Sloan, witnessing a woman playing with and feeding the restaurant’s cat, was so enthralled by the scene he chose to paint it from memory. Sloan’s choice of subject and setting not only creates a compelling, multi-layered image, but succeeds in capturing a moment of everyday life in New York City that might otherwise have been lost. 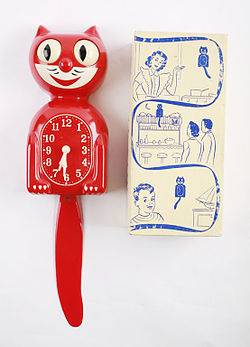 From the everyday lives of early twentieth-century New Yorkers, to one of the most commonplace objects of the mid-century. The Kit-Cat Klock first appeared in 1932, and over the years this art deco-style gadget hasn’t changed much. Here is yet another kitchen cat who has made the history books; this time as an enduring symbol of pop culture kitchens. 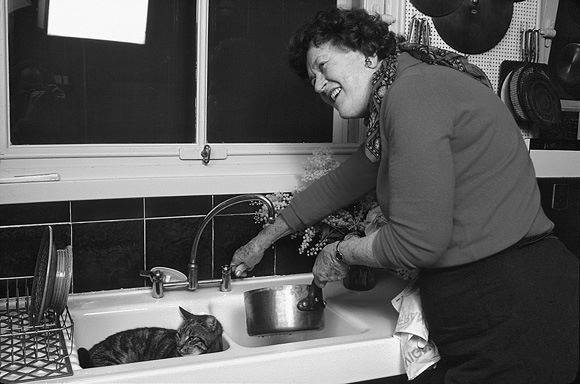 As we’ve seen, the presence of a cat in the kitchen is often symbolic of down-to-earth domesticity, everyday life, mischief and unpretentiousness.

All of which could describe Julia Child, who found herself adopted by her first cat, Minette, when she moved to Paris. Far from being shunned from the kitchen, Minette became a fixture there, and soon grew fat on all the tidbits that Julia slipped her. She even had her own personal stool to sit on while Julia worked. And so, the final depiction of cats in kitchens that I’ve chosen to share is not a painting, but a book: Minette’s Feast by Susanna Reich and Amy Bates (2012). 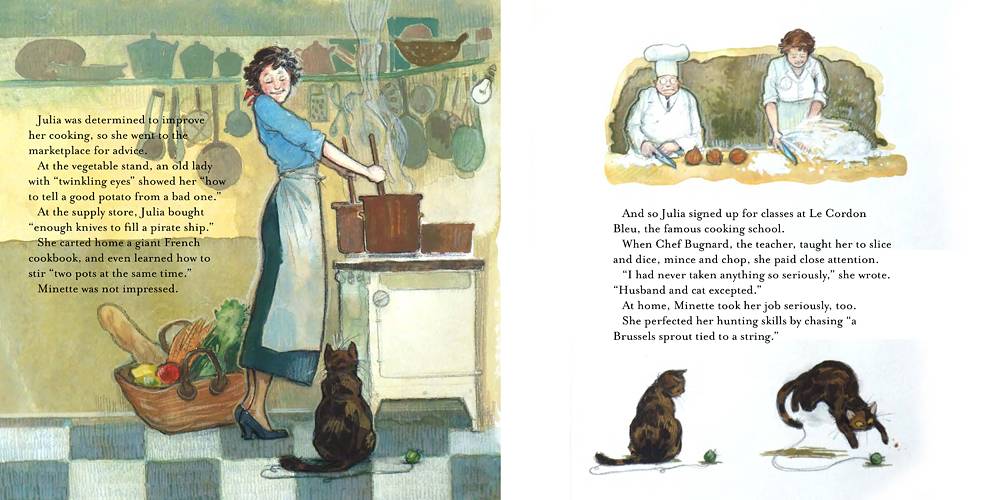 This beautifully illustrated story tells us of Julia’s time in Paris, and Minette’s time as her kitchen cat. It features some truly lovely illustrations that, like the previous paintings, capture the essential verve, life and joy of the humble kitchen cat. 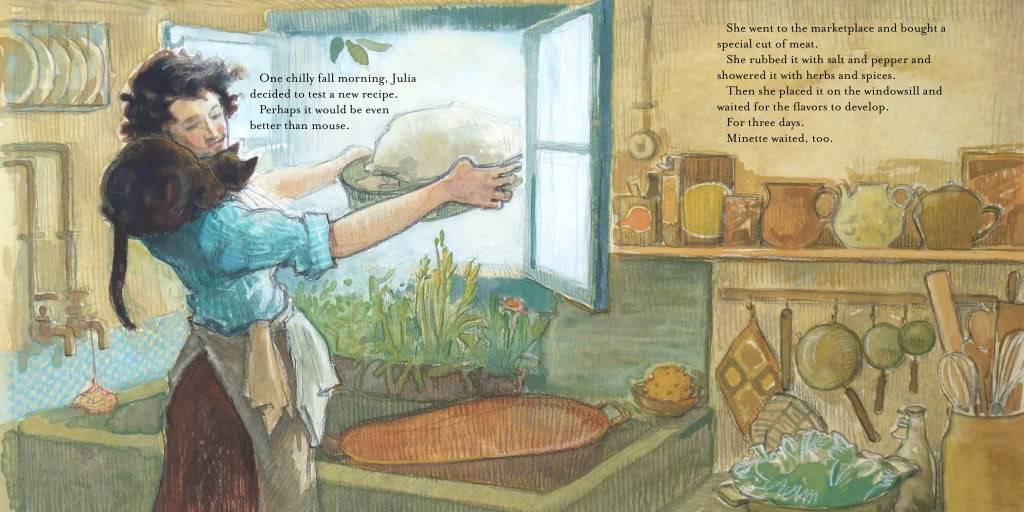 Laura Madeleine is an author and baker from Bristol with two kitchen cats: one who is partial to butter and drinking from the tap, and another who prefers to get underfoot and sing for her supper.

Laura’s latest book, Where the Wild Cherries Grow, is a sweeping love story with a delicious foodie twist, set between the wilds of the English coast and the sun-drenched shores of French Catalonia. It is published on 15th June by Transworld.

12 thoughts on “Five Hundred Years of The Kitchen Cat”