While many of us love and care for Persian cats it’s unfortunate that some breeders (not saying all!) do take breeding this particular breed to an extreme causing serious health harm for the cats.

As some of you know we go to Japan a lot and unfortunately we’ve seen this problem in a cat cafe that almost solely had rejected Persian cats as their deformities were so severe that no regular owner wanted to keep them anymore… hence why we thought it important to share the shout-out from our partner charity International Cat Care on the impact this is having on these breeds:

There is growing evidence to show that flat-faced or brachycephalic cats (picture 1), including most modern Persians or Exotic Shorthairs, are suffering from a number of health problems, leading to lifelong suffering as a direct result of being ‘designed’ to have a very flat face. This includes breathing problems, eye inflammation, skin infections and difficulty eating.
Amongst the latest evidence is a new scientific paper from the University of Edinburgh1 which concluded that flatter-faced cats were more likely to have breathing problems and that the breathing difficulties were also associated with increased tear staining and a more sedentary lifestyle. This comes on top of a recent successful prosecution in Switzerland under the Animal Protection Act, brought against two people who bred extreme bracycephalic cats. The revised animal protection law in Switzerland has strengthened regulations against intentional breeding to produce specific traits that compromise the health and wellbeing of an animal. 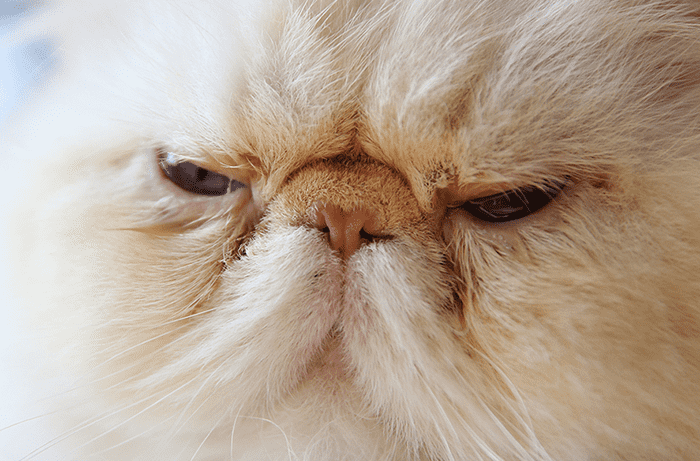 Brachycephalic animals have a shortened muzzle which constricts nasal passages and can result in respiratory and feeding problems. In addition, the tear fluid cannot drain normally from the eyes, explaining why such cats have permanent eye discharge and tear staining of the face (picture 2). The eye and facial abnormalities can result in chronic inflammation of the eyes and problems with skin infections in the folds around the flattened nose and across the face. Many affected cats also have difficulty in picking up food, as the jaw is also malformed, with teeth and jaw being misaligned. 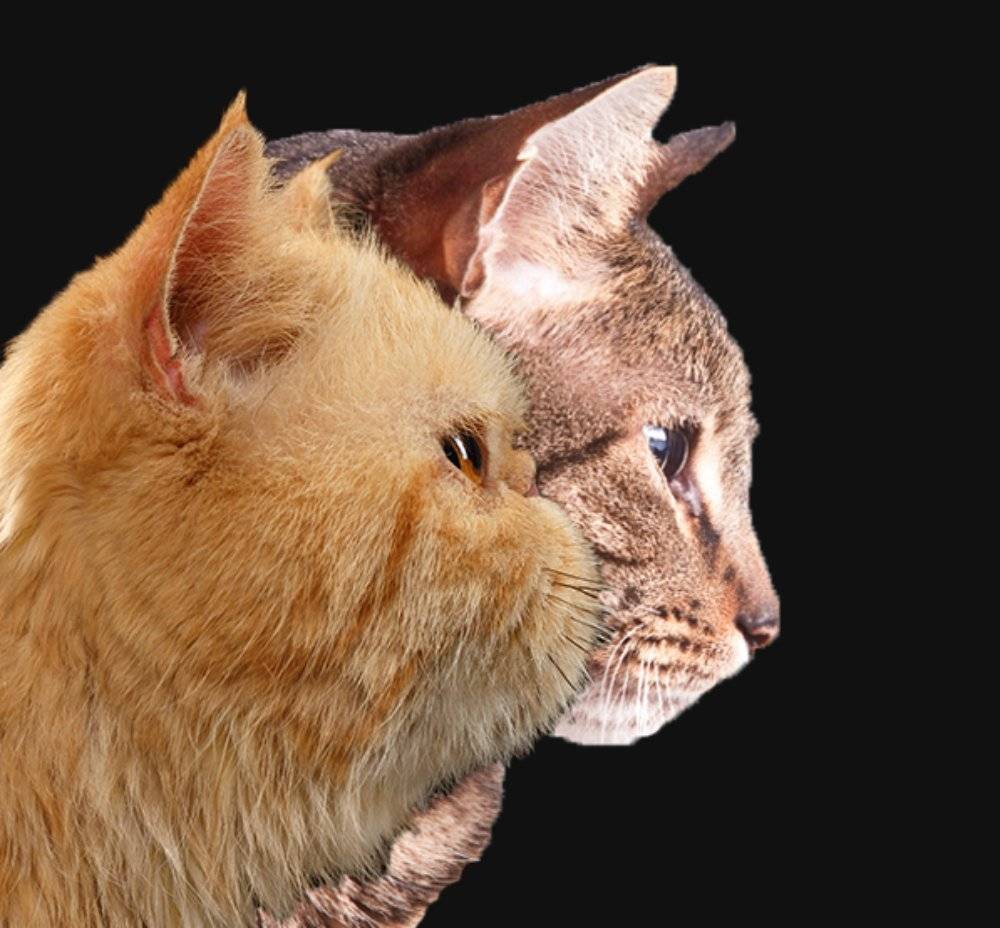 In extreme cases, brachycephalic animals will have serious respiratory disease, causing significant suffering. Shamefully this is a man-made condition (picture 3). In pursuit of a look or fashion, breeders of some cats and dogs are selecting ever-shorter muzzles that inevitably result in serious welfare issues. Impaired breathing in these animals – part of a condition called brachycephalic obstructive airway syndrome (BOAS) – can lead to health problems throughout animals’ lives and is often life limiting. This has been a common problem in many brachycephalic breeds of dog such as the pug and bulldog, but there have been increasing calls from veterinary and welfare organisations to recognise the suffering this causes in both dogs and cats.

The University of Edinburgh study, published in the journal PLOS ONE – saw hundreds of owners submitting photographs of their cats and completing a detailed health survey so that researchers could measure the facial features of the cats and assess breathing abnormalities (noisy breathing or difficulty breathing after exercise). The research confirmed that flatter-faced cats (of breeds such as the Persian or Exotic Shorthair), were more likely to have breathing problems and that the breathing difficulties were also associated with increased tear staining and a more sedentary lifestyle. 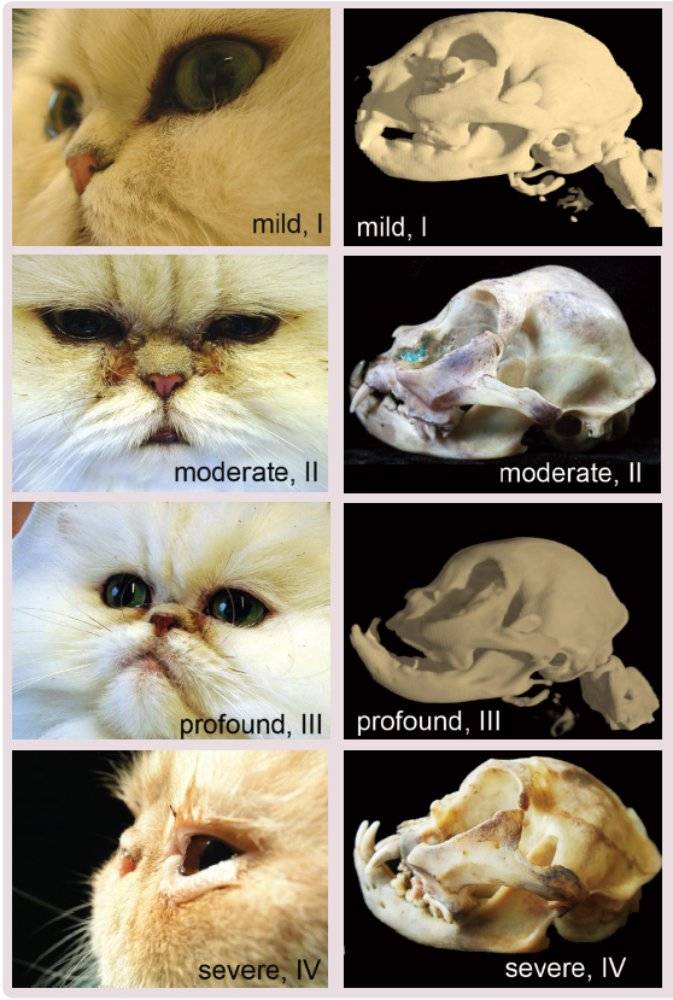 A previous paper, published in the Journal of Feline Medicine and Surgery (JFMS)2 showed dramatically, and graphically, how the skulls of brachycephalic cats are actually deformed, especially the nose and jaw (picture 4). These shocking images demonstrate the altered conformation and are a salutary reminder of how severely the normal skull structure has been changed.

Unfortunately breeds of cat and dog with flat faces are becoming more and more popular, and extremes (of an already abnormal anatomy) can become instant internet celebrities. These breeds and individuals often have large or prominent eyes which are considered by some to be ‘cute’ because they are baby-like, and the flattened face often has an up-turned or down-turned mouth, which gives it a human or cartoon characteristic of smiling or scowling, such as Grumpy Cat.

Claire Bessant, Chief Executive of International Cat Care said, ’It is very depressing to see the life which has been deliberately dealt to some breeds of cats because of a human desire to develop a certain look. I urge cat lovers to speak out and help others to understand that this is not something we should be doing to cats, and not something we should be tolerating. One of the best and most beautifully naturally designed animals – the cat – would not normally have any of these problems; we have created them through selective breeding. We should not be encouraging people to breed these cats by calling them ‘cute’, by being amused at their facial characteristics, or by the fact that they snore – rather we need to understand that this is human intervention that is wholly detrimental to the welfare of the cats and is simply cruel. International Cat Care takes an ethical view of all cat breeds and our website (http://icatcare.org/advice/cat-breeds) outlines the problems that exist for some breeds, including very flat-faced cats in the Persians and Exotic breeds. Our stance is that we should never deliberately breed cats for any feature or characteristic that impairs their welfare.’