In 2004 I started volunteering with Toronto Animal Services, not long after I overheard some of the volunteers talking about a particular cat that had just come in.  I will preface this by saying that all cats are beautiful and unique, but the talk around the shelter said there was something really special about this new cat. 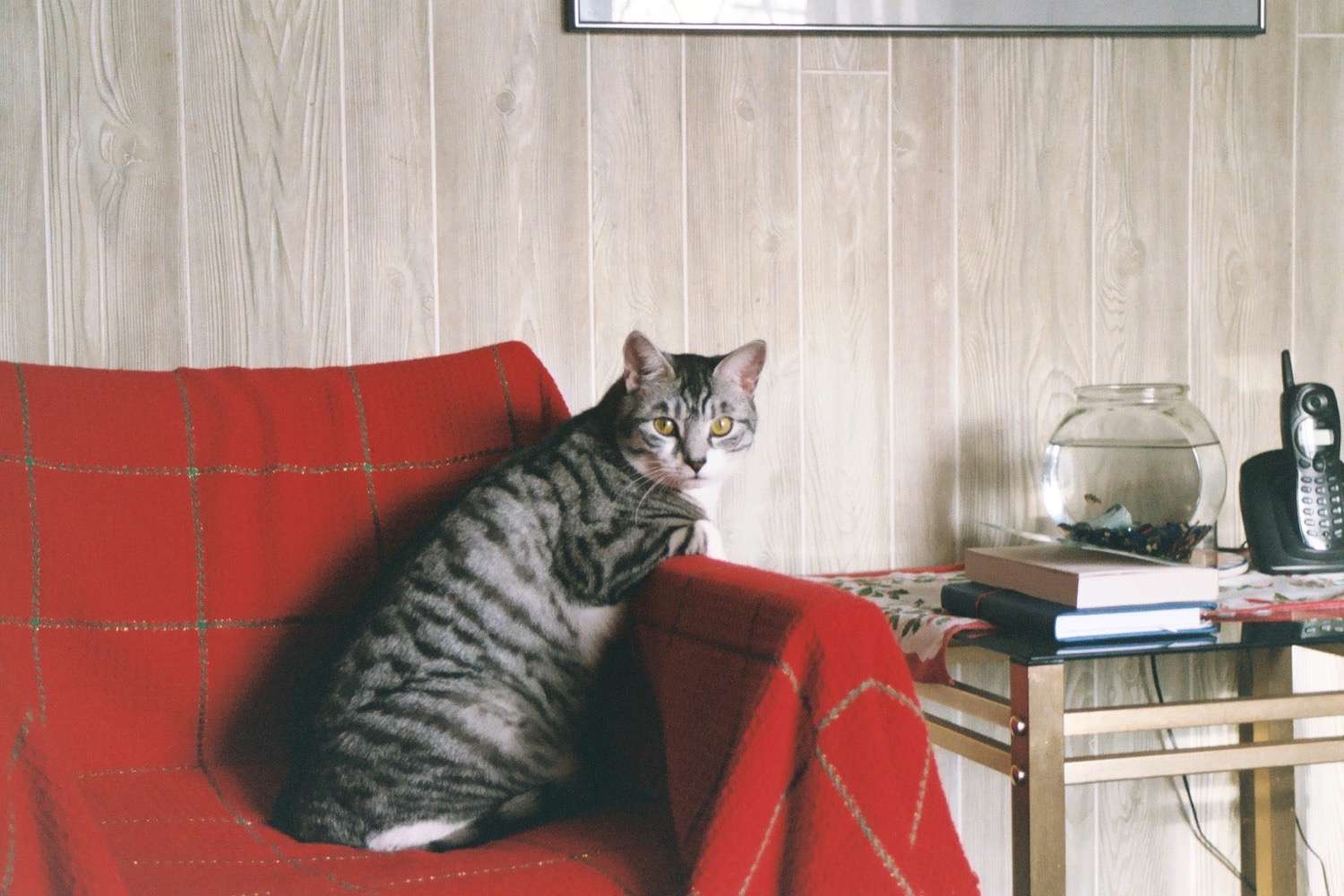 There in his cage was a beautiful silver tabby. On the cage card was written the name Spinner, Male, approximately 2 years, stray. Due to his striking looks he had immediately caught the attention of staff and volunteers … then there was the spinning. 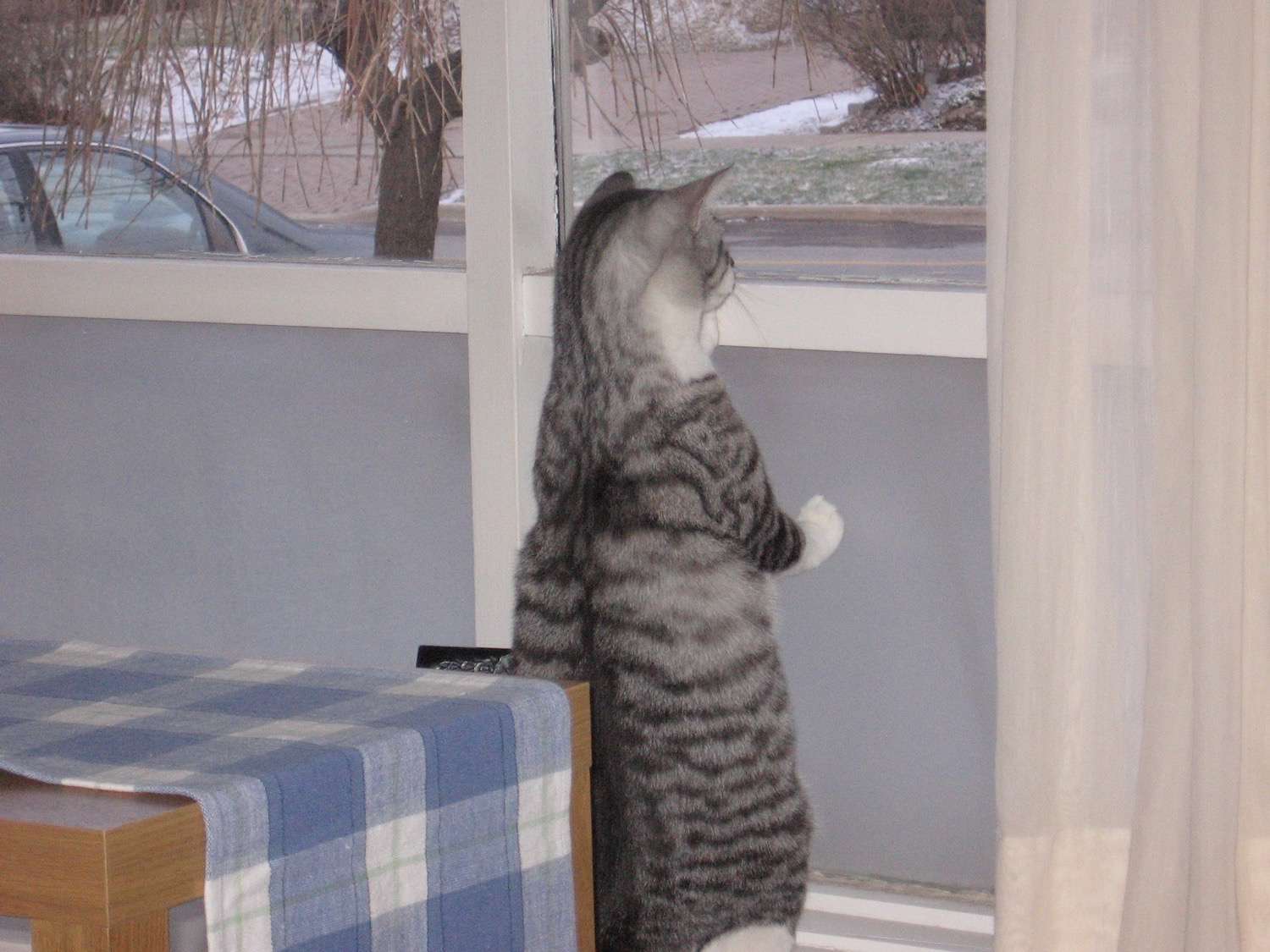 Spinner was diagnosed with Feline vestibular disease, a condition that causes in-coordination, circling to one side, involuntary darting of the eyes back and forth (nystagmus), and a head tilt. The vet had said it is likely the cause of a brain lesion but that there is no pain associated with the condition or treatment.  Spinner will sometimes turn around in a circle before getting to where he needs to be or when excited (especially during feeding time). However, when he is relaxed he can almost walk the length of a room in a straight line. Because of this condition Spinner was considered a special needs cat.

We already had two other cats at home, a tricolor tabby named Cleo and a little house panther named Simon, so I knew it was going to take some convincing to add a third. As luck would have it that year the animal shelter had decided to participate in the cat show during the Canadian National Exhibition. They entered a few cats, including Spinner, into the  “household cats” category in hopes of getting them adopted and to also help highlight cat adoptions at the animal shelter. 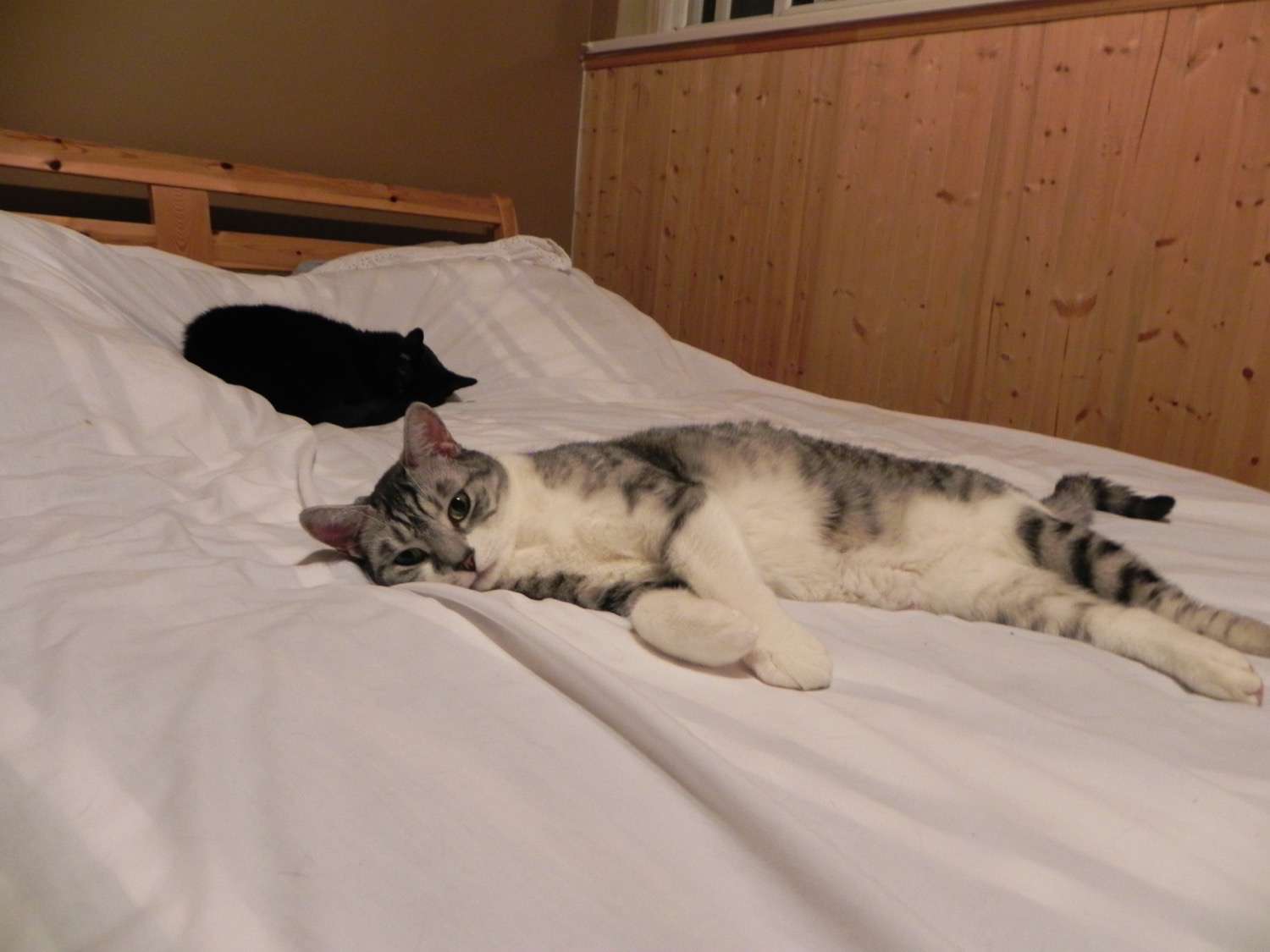 I remember convincing my mother to come to see Spinner, you know just to take a look. We watched as he was placed on the judging table, then picked up and held, and stretched the whole time handling it all like a pro. By the end of the show Spinner had won over the judges and taken home 11 ribbons in the best household cat category! My mom was on the fence about bringing another cat in, but after meeting him, she couldn’t say no.

At home Spinner and Simon became quick friends and best buddies Spinner was always with or near Simon. Cleo didn’t much care for either so the boys bonded.  Many years later Cleo passed away and then Simon was gone. Spinner sadly had become an only cat. It was a very rough time but Spinner helped me get through the loss becoming the full center of attention and soaking it all in. 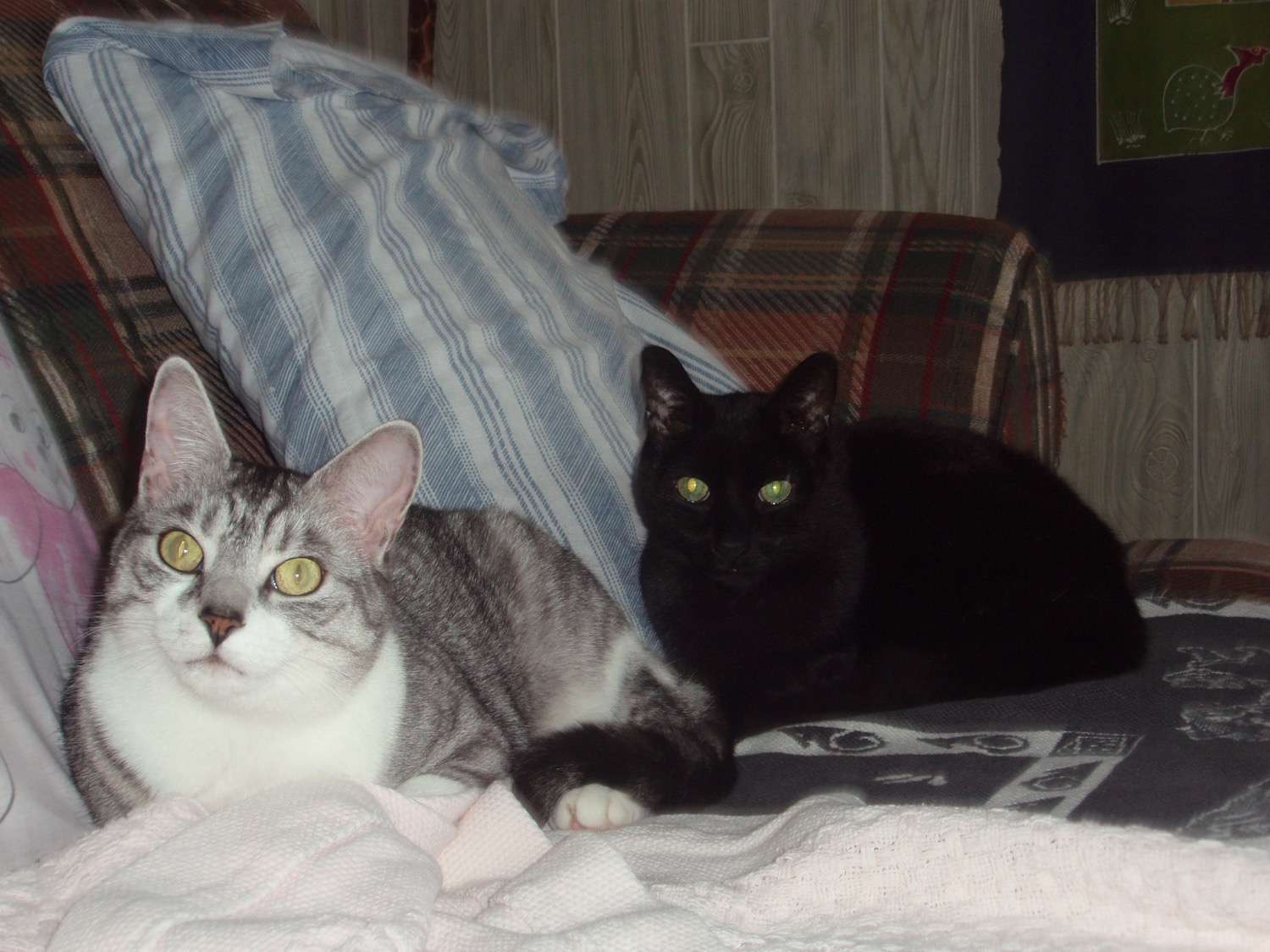 Spinner LOVES to he held, all the time. He will stand on his hind legs and practically climb his way up you if you don’t pick him up. He has a habit of jumping on your back when you bend over, then he makes himself comfortable there. He loves to sit on your shoulders and…personal space? No clue what that means, but really does any cat? 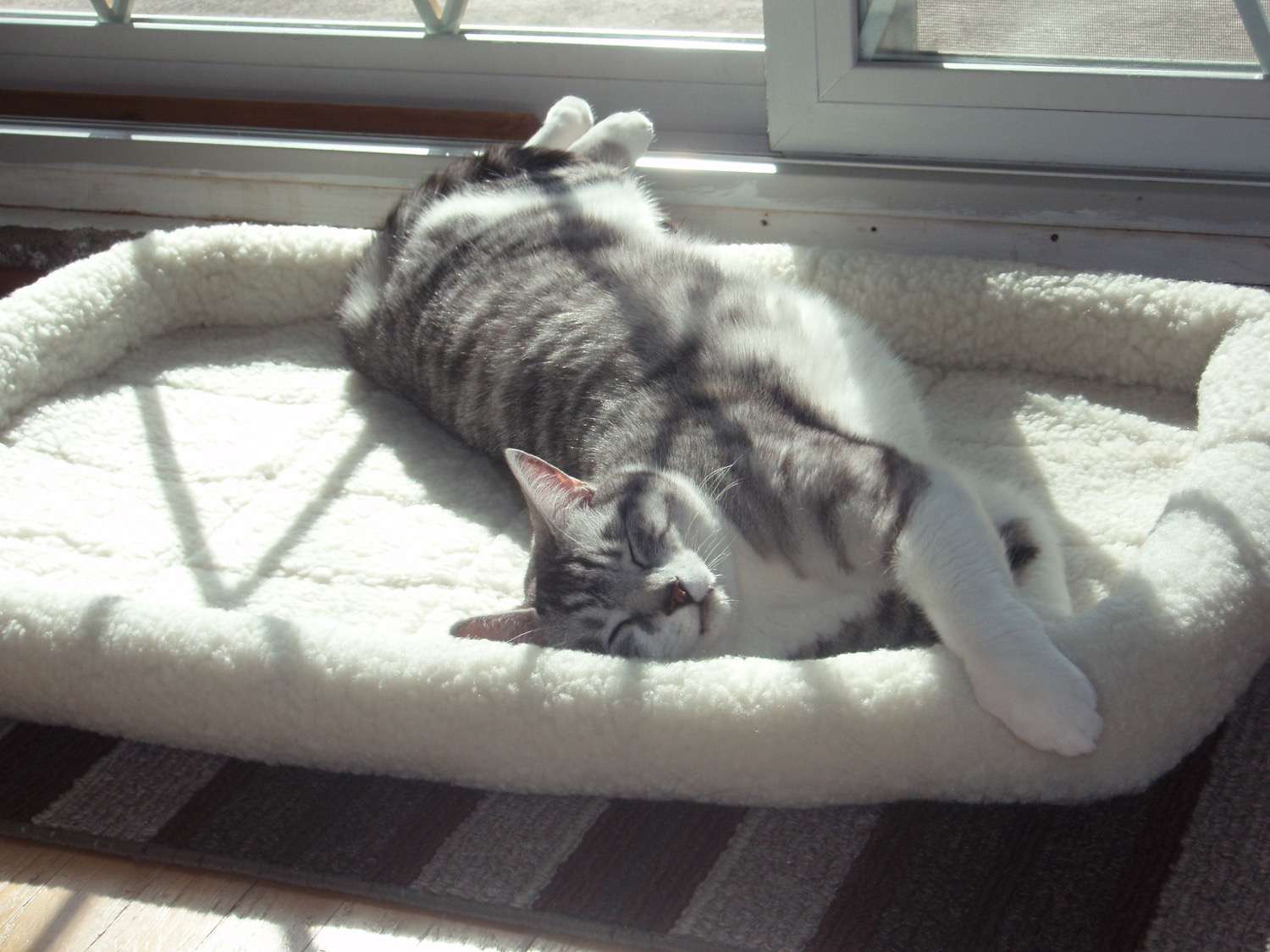 Spinner is a very affectionate cat, can be demanding of your attention, is a purr machine that loves to cuddle, and loves to talk. Did I mention he loves to talk? Sometimes he doesn’t know when to stop, so he then resorts to “making noises” where he doesn’t open his mouth and just bobs his head up and down.

He has many sleeping spots and likes to change it up, under the bed, in a basket, on a chair, on the stove, atop the fridge, in cat bed or a closet.  He will always choose to be near or on me. He has this thing where he will sit on my arm, when I am typing – a clever distraction. 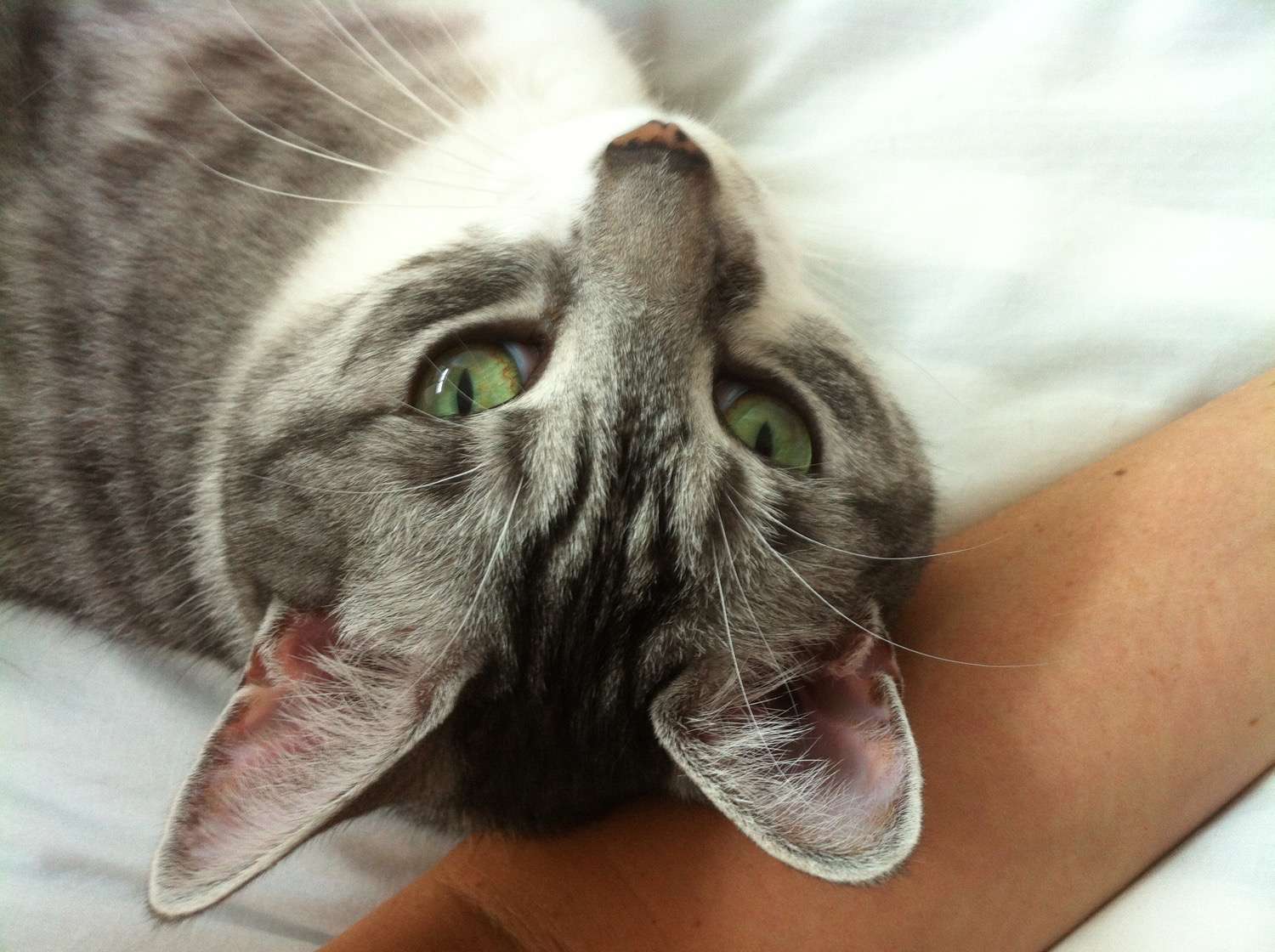 Spinner has earned himself a multitude of nicknames, as did all our cats, including bunny rabbit face, pinner, noise maker, gummy bear, snotty pants because he has mastered the look of disapproval, white tiger, google eyes, and cuddle monkey.

Spinner’s belly is a free for all and it’s a good thing to because it’s pretty appealing. You can rub his ears, squeeze his paws, hold and hug him without protest. 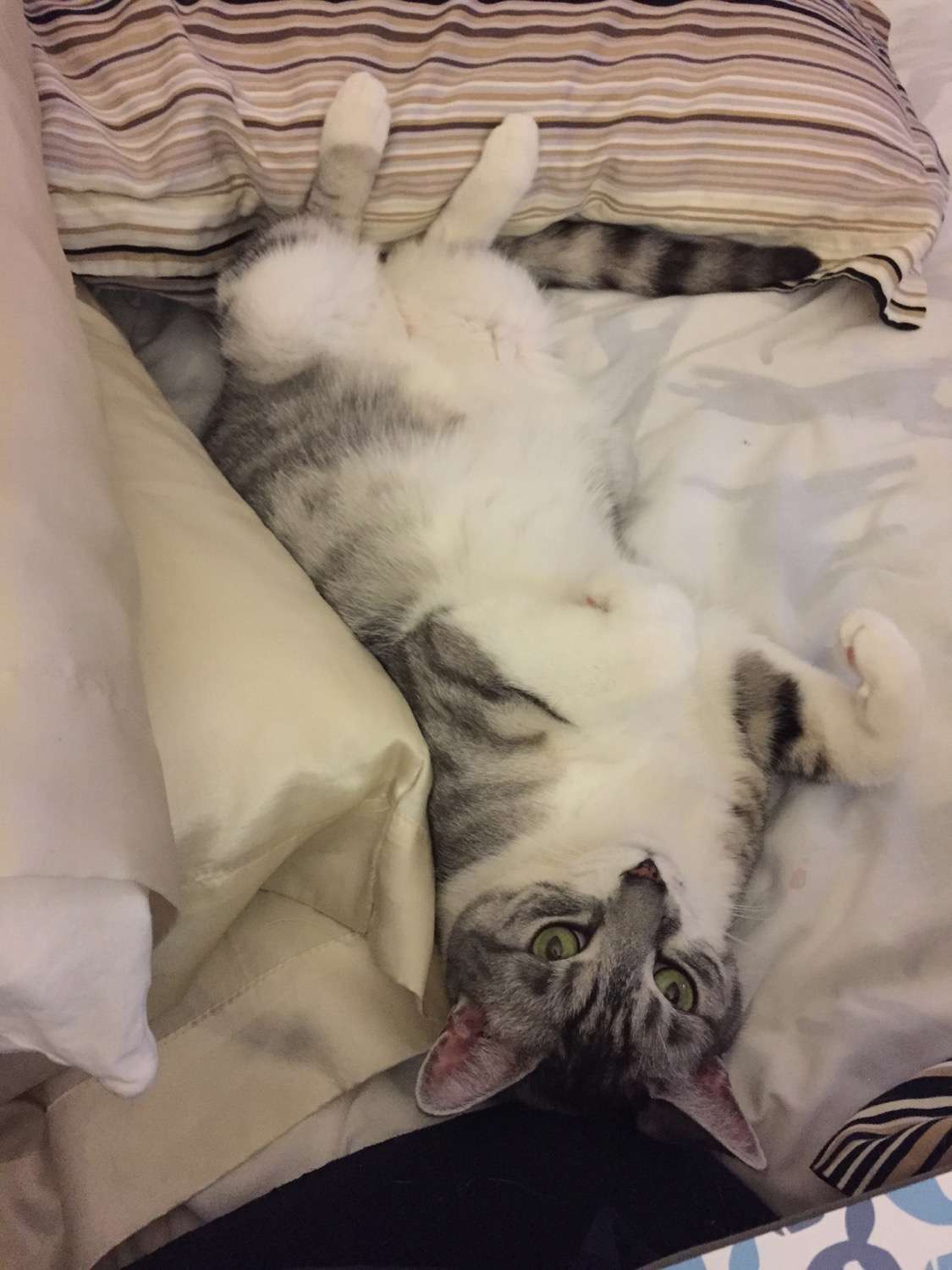 Spinner has me wrapped around his paws and I adore him, even though sometimes he can drive me crazy, I tell him this on a regular basis.  He is constantly doing something goofy or being ridiculously cute.  Of course when he is naughty I can’t stay angry with him for long. 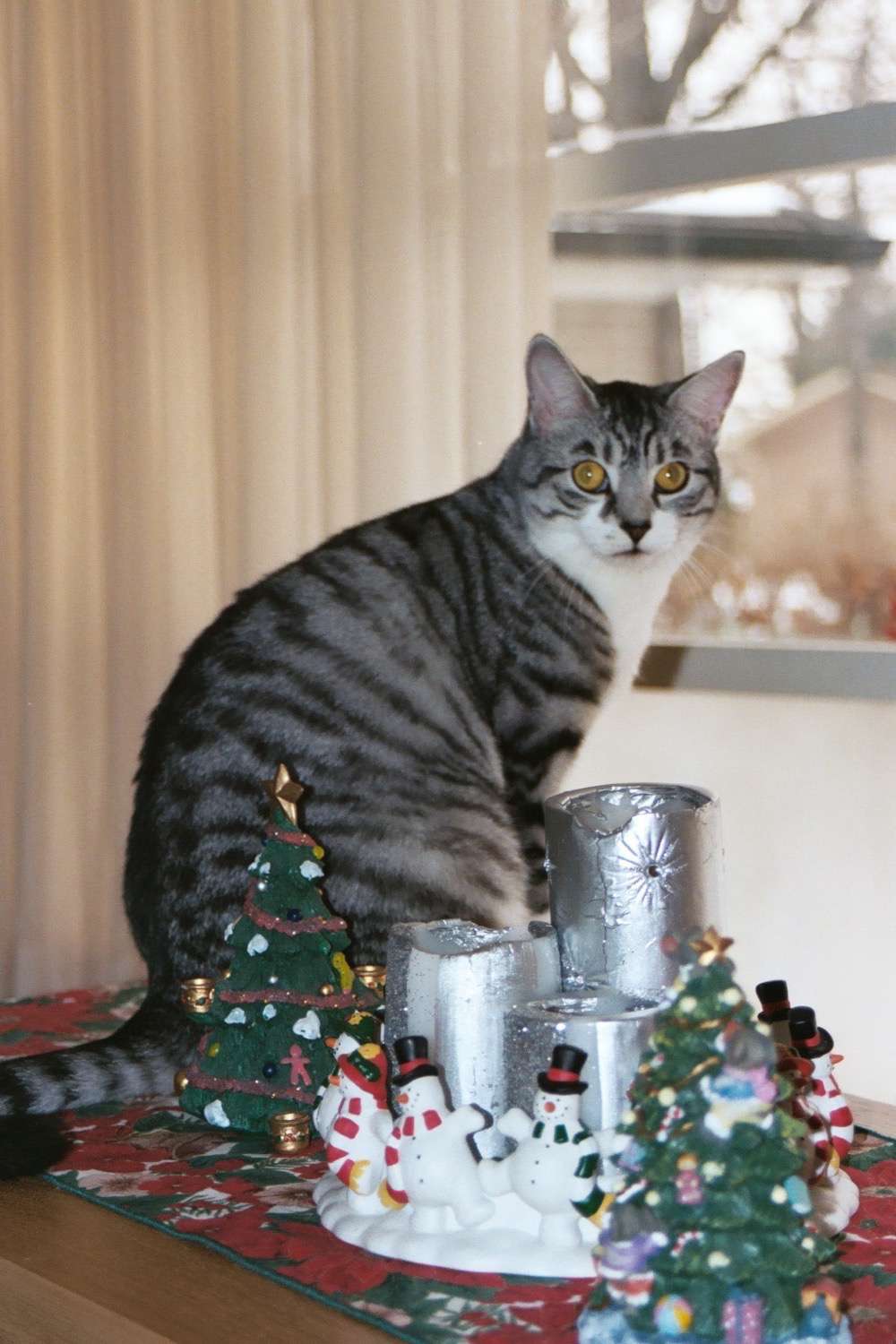 Spinner also has a fan club. People who have met him will ask how he is or remark how lucky I was to have adopted him. Looking back I don’t know if it was fate or just good timing that brought Spinner into my life, whatever it was I am thankful for it and the time that we have together.

Not yet subscribed to the Katzenworld Newsletter? Click here.

Thanks for letting me share Spinner and his story with you! 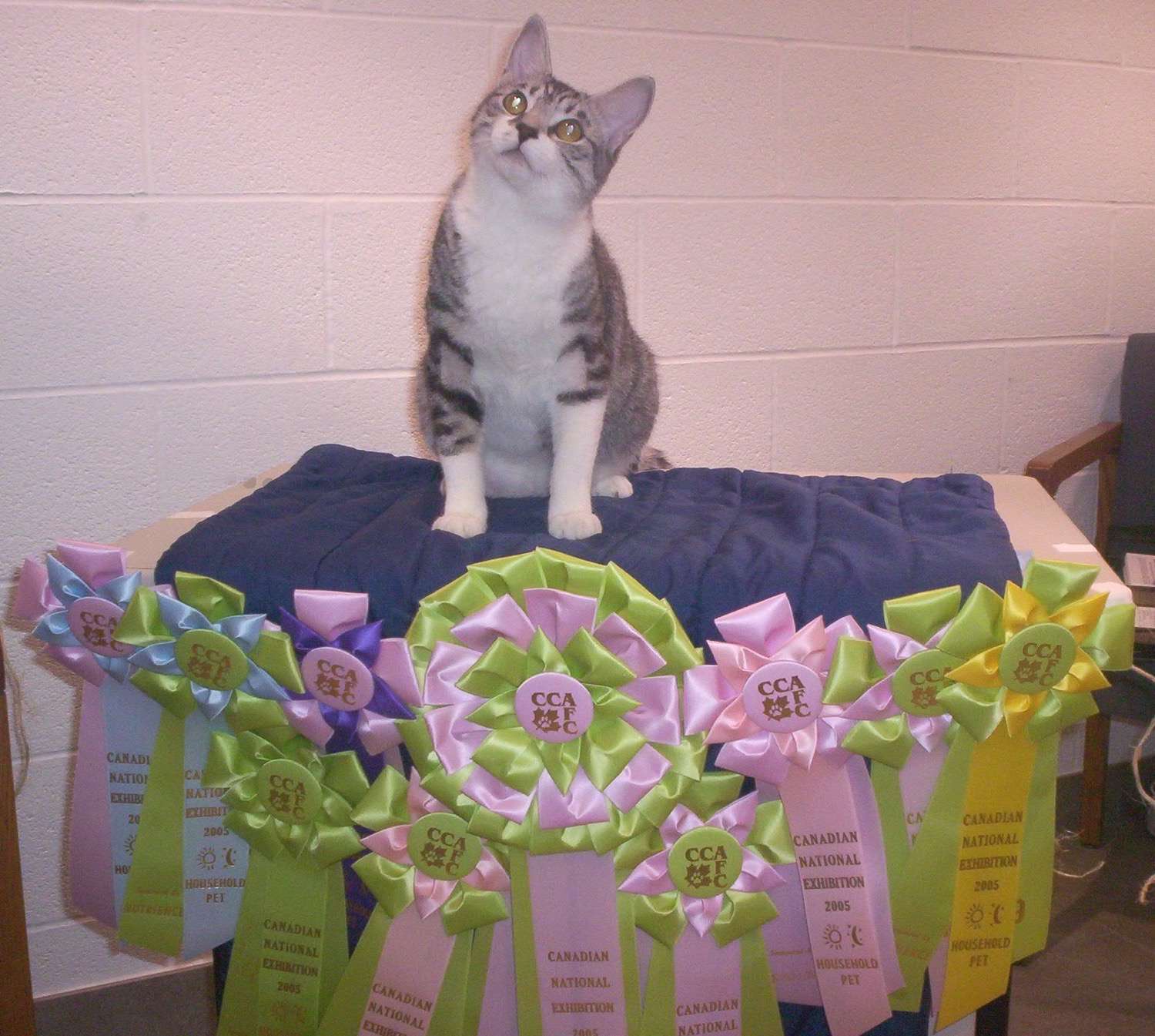