Today we are looking a very important part of owning a kitty the duty of keeping their litter tray clean and fresh!

So far we’ve tried a number of cat litter trays from the basic tray with low sides to a full covered one with an entrance designed to decrease litter spill. All though have still needed to have the litter raked twice daily to keep them clean and odour free. It’s something that you do for the love of your kitties but there are some products on the market which are designed to reduce the need for human intervention in order to keep the cat’s toilet area fresh. The PetSafe® ScoopFree™ l Self-Cleaning Litter Box is just one of those which we have been lucky to review.

The basic idea of the automatic litter box is a cardboard box containing special crystal litter over which sits a full width motorised metal rake. There is a detector which senses when your cat is actually in the litter tray. The time between the cat using the tray and the rake starting can be changed. When activated, the rake pushes any poop (along with used crystals) along to the end of a box under a flap which is lifted and lowered automatically. Once the collection area is full or the crystals are starting to lose their absorbency (approx. 2 weeks with 2 cats), the box along with the crystals are thrown away There is a lid for the box which is put underneath the box to provide extra protection against leaks. A quick calculation is that would be 26 boxes per year with 2 cats – something to consider. The foot print is about is about 1.5 times a usual litter tray so not much bigger to accommodate (though we swapped out our Japanese covered litter tray with a corridor to reduce litter spill so actually regained some space).

The instructions mentioned a way to acclimatise your cats to using the crystals rather than standard litter. However, no sooner had I set up the toilet, Nubsey was straight in there and very obviously (and noisily) enjoying the feel of the crystals. Although the litter is crystalline, the litter is not sharp at all and surprisingly don’t cause you to wince when you step on it accidently.
l was a little concerned that Nubesy would find it a bit difficult to use the toilet with only one front paw as it is quite a bit higher than our other litter trays. I needn’t have worried as she was able to jump up onto the front and into the crystals with no problems. Getting out proved just as easy for her, with a little hop over the flap. 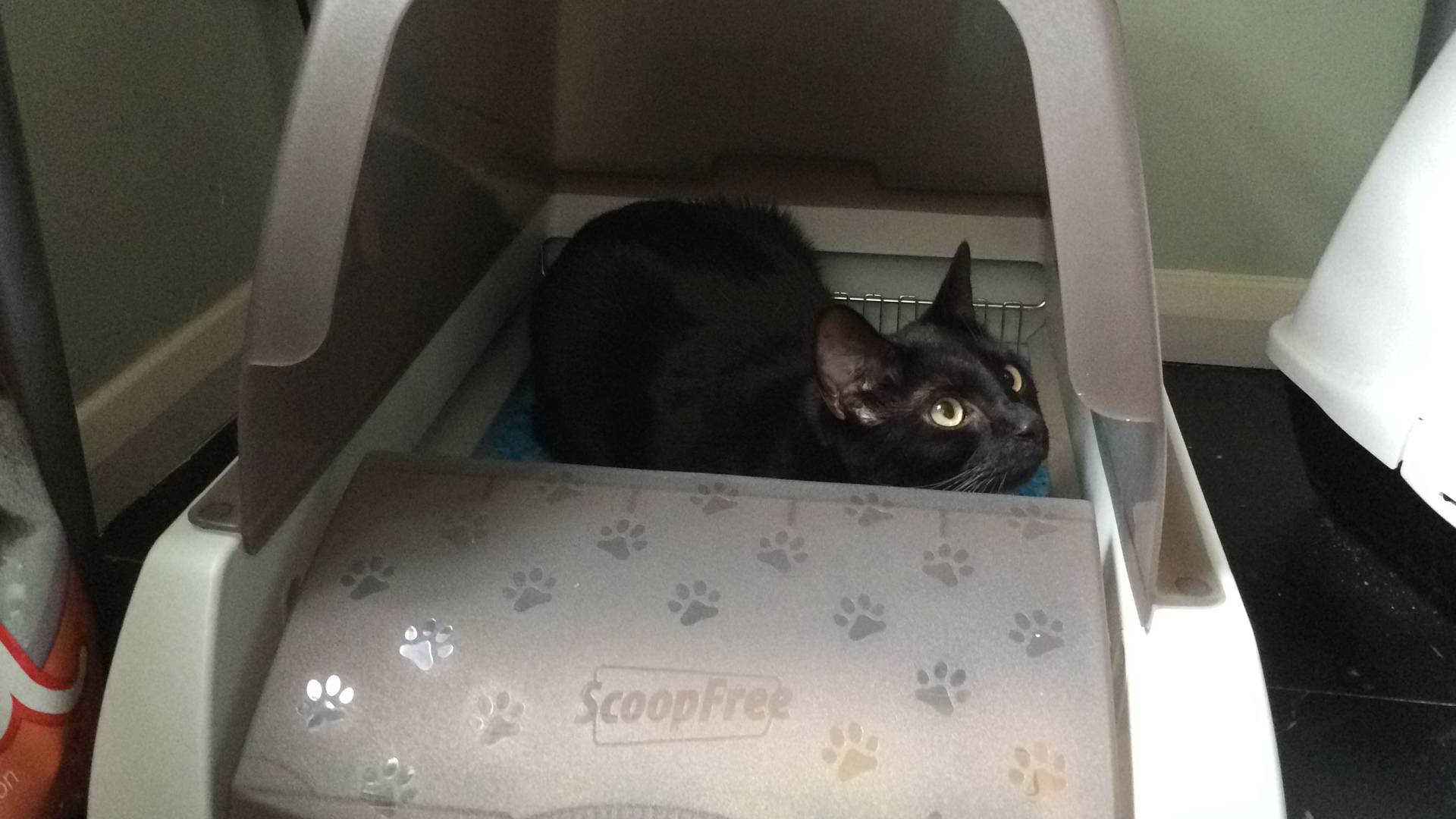 When we first set up the litter tray, we set the timer to the minimum of 5 minutes. However, we found that both cats would often use the toilet after each other so decided to move it to the recommended 20 minutes which seems to work just fine. Another plus of using the longer setting is that it gives time for any wee to evaporate, poops to dehydrate and any odours to be absorbed by the crystals. This meant there were fewer urine streaks through the crystals and less smell. Oliver often leaves his poops uncovered and we’d know this as soon as we opened the front door and caught the smell. The litter tray with its automatic scooping has meant that we know longer have to deal with this.
As the actual tray is disposable, there is little need to clean the device. Occasionally though, some poop may get stuck on the rake and needs to be cleaned. We recommend doing this as soon as you notice it to prevent it drying on and becoming difficult to remove. 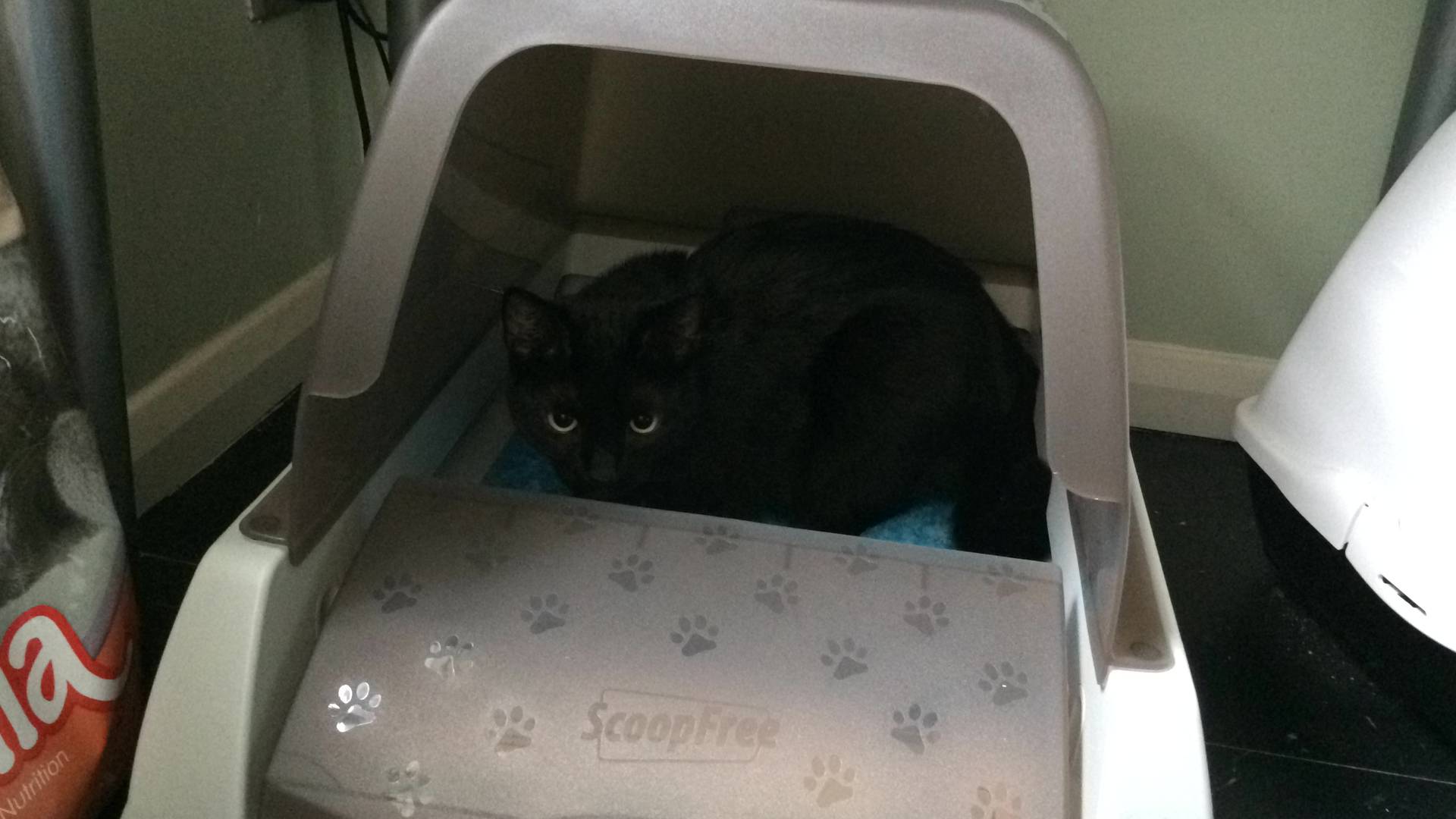 Overall, we were very pleased with the way that The PetSafe® ScoopFree™ l Self-Cleaning Litter Box works. Yes, it is more expensive than a regular litter box with standard litter, but there is a lot to be said for not having deal with your pet’s toiletry needs twice a day and know that they will have a clean tray to use while you are out at work all day.

Below you can find a complete video of our two kitties using the toilet. At the end of the video we also demonstrate how the toilet cleans itself.

So if you would like to buy one of your own you can find this toilet online as follows:

Additionally if you are based in the UK you can also give the friendly team at PetsSafe a call on 0800 046 14 14 and they will give you advise and locate your nearest stockist for you.