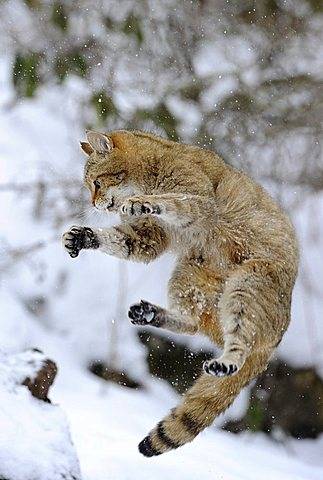 After a previous post on wild cats in Europe (you can find this one here) we actually did some research to find out if there any of those left in the UK and there are! We found the below article on Wildlife Extra:

A Scottish wildcat sanctuary has been created on the Ardnamurchan and Sunart peninsula on Scotland’s west coast in a bid to save the endangered species, which experts believe could number as few as 35.

The species is threatened from hybridising with domestic cats, and to help alleviate this threat all domestic and feral cats in the area have been neutered over the last five years.

“Cats of any kind are notoriously difficult to survey,” said the project scientific adviser, Dr Paul O’Donoghue, of the University of Chester.

“However, over the last six months we’ve really saturated the area with live traps, cameras, vets and ecologists, and had lots of people from the local community out looking as well.”

“The only feral cats seen have already been neutered, which means the population should collapse naturally within the next couple of years.”

This is thought to be the first time feral cats have been managed in such a large mainland area anywhere in the world.

The wildcats of Ardnamurchan, which could number fewer than 10, will then be trapped and DNA tested to check they are pure breds. If they are, they will be left to thrive and monitored.

However, if DNA proves the population to be made up of hybrids, then pure wildcats could be brought to Ardnamurchan from other areas of Scotland.

Dr O’Donoghue said: “Our goal is to establish populations of genetically pure wildcats. We are determined not to settle for second best, or to settle for a bunch of tabbies that bear a resemblance to wildcats.

“Protecting anything less than the pure Scottish wildcat will condemn the species to extinction.

“The behaviour of feral cats and pure wildcats is very different. Scotland’s ecology needs the true wildcat and, outside of a wildlife park enclosure, this is the only place in the UK where they are safe from hybridisation.”

Thanks for reading and find the original one on Wildlife Extra by clicking here.

And interesting extra read on the BBC is here.

And what are your thoughts! I personally would love to go there to take some photos of them 🙂