We found this very interesting post for you on the caternet! Not enough people know that there were indeed MANY brave kats at the forefront of this! To honour them please find photos and stories of them below.

And just to clarify – we do not agree with some of the things our ancestors put these cats through but there are loads of stories that should not be forgotten by time.

During the war apparently cats were a common sight on ships and in trenches to hunt rats and mice! Beyond this duty they became friends and companions to sailors and soldiers alike

It is estimated that approximately 500,000 cats were dispatched to the trenches, where they killed rats and mice; unfortunately some were also used as gas detectors. On the sea cats had the run of the ship – a tradition dating back thousands of years. As the U.S. Naval Institute explains:

It is likely that the ancient Egyptians were the first seafarers to realize the true value of having cats as shipmates. In addition to offering sailors much needed companionship on long voyages, cats provided protection by ridding ships of vermin. Without the presence of cats, a crew might find their ship overrun with rats and mice that would eat into the provisions, chew through ropes and spread disease. The more superstitious sailors believed that cats protected them by bringing good luck. It was also common for crews to adopt cats from the foreign lands they visited to serve as souvenirs as well as reminders of their pets at home. 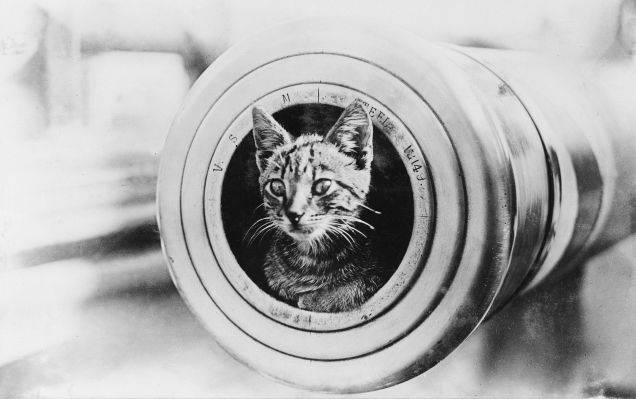 A gunner with the regimental cat in a trench. Cambrin, France, February 6th, 1918. [IWM] 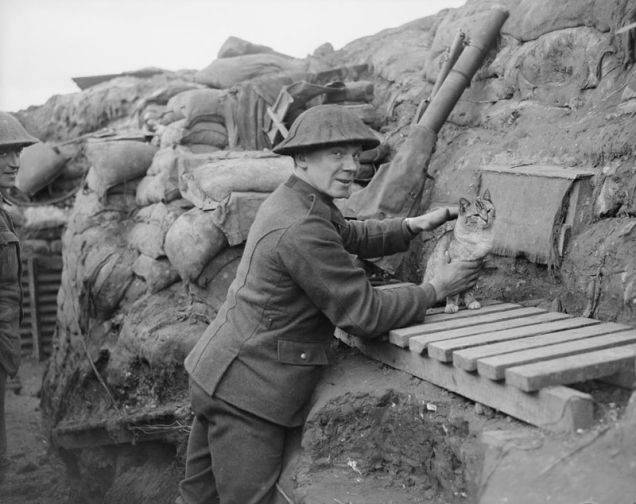 “Togo”, the cat mascot of the battleship HMS Dreadnought. [IWM] 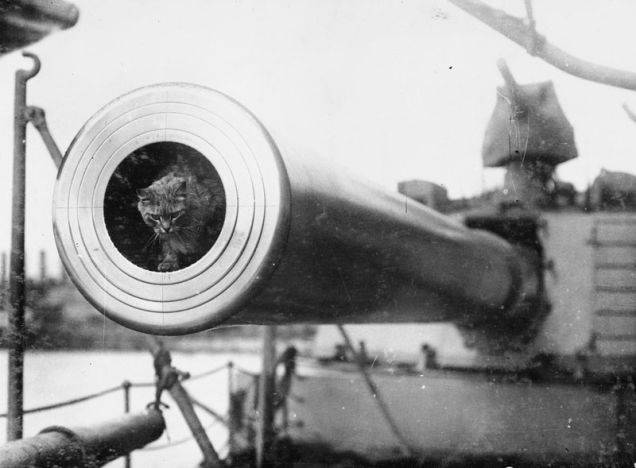 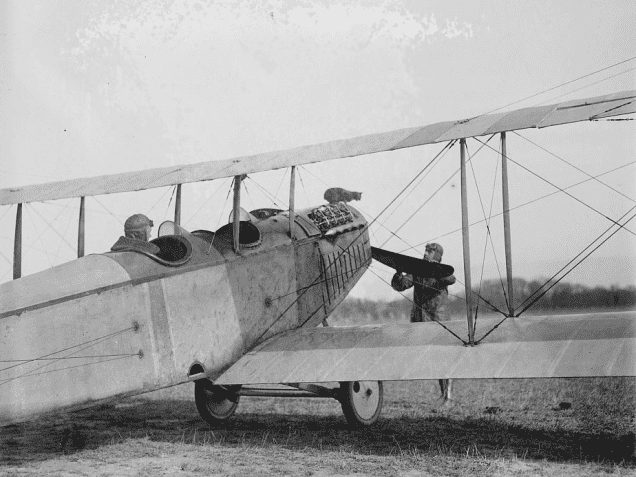 “Pincher,” the mascot of the HMS Vindex, sitting on the propeller of one of the sea planes carried by the ship. [Wikipedia] 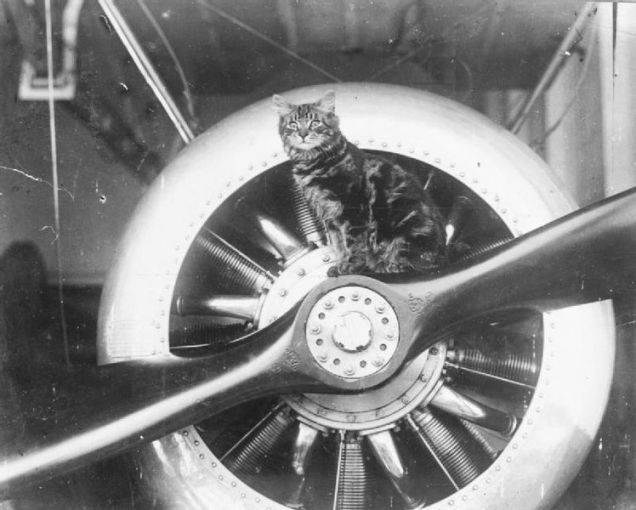 Ship’s cat strutting along the barrel of a 15-inch gun on the deck of the HMS Queen Elizabeth. Gallipoli Peninsula, 1915. [Bibliotheque nationale de France] 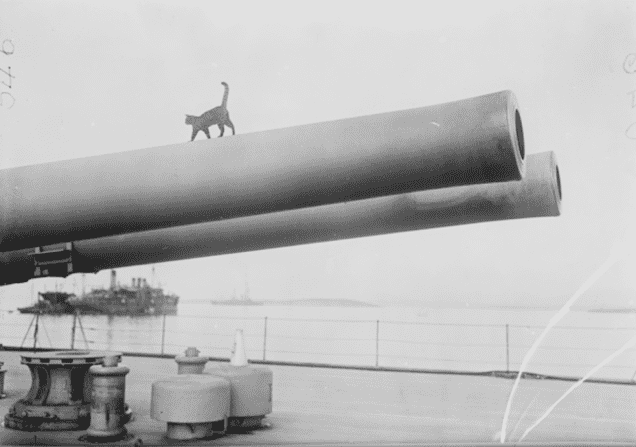 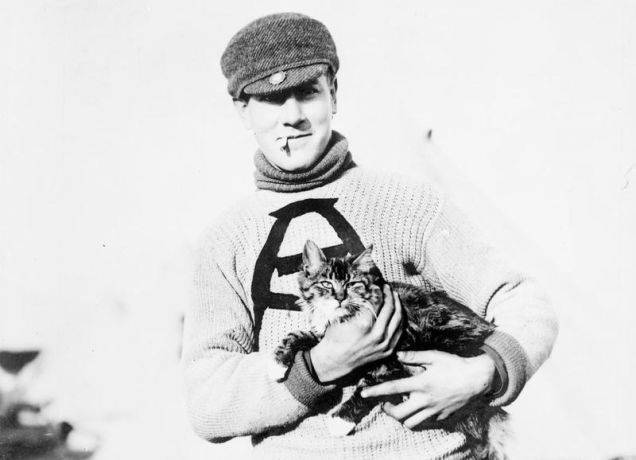 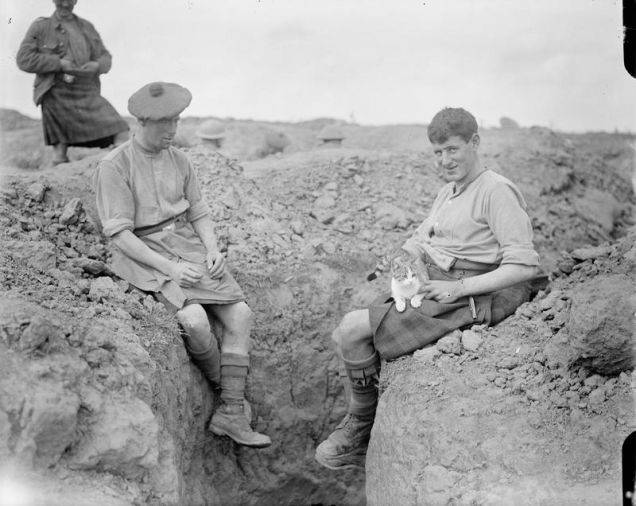 Two cats pose in the breech of a 4-inch caliber gun aboard an unidentified U.S. ship. [U.S. Naval Institute] 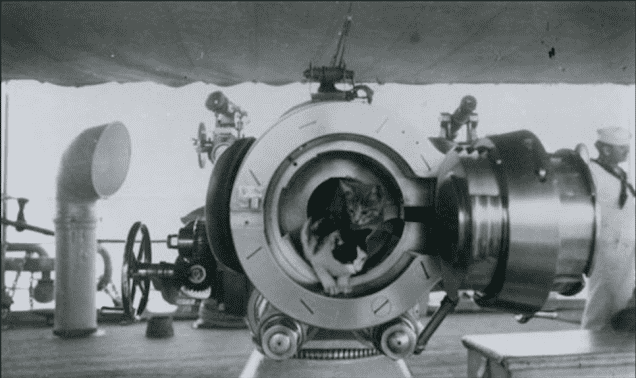 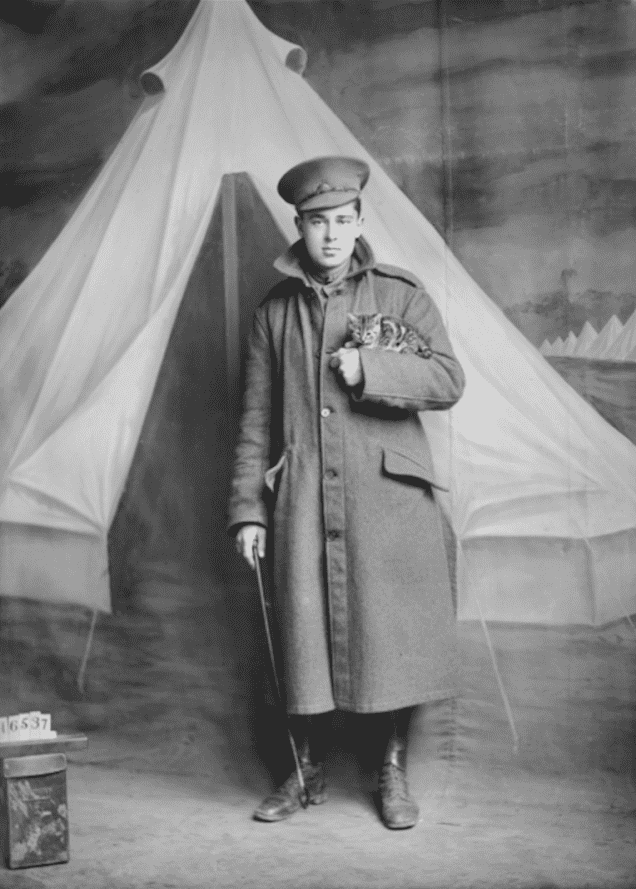 Officers of the U.S. 2nd Army Corps with a cat they discovered in the ruins of Le Cateau-Cambrésis. [Pictorial Record of the 27th Division] 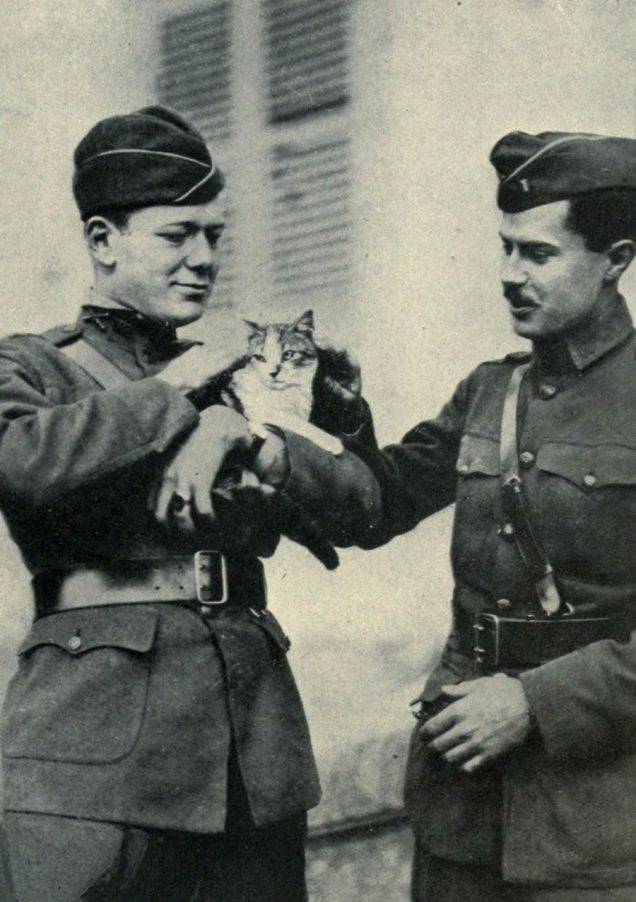 A sailor on board the Royal Australian Navy Destroyer HMAS Swan shaking the paw of “Ching,” the ship’s mascot. [Australian War Memorial] 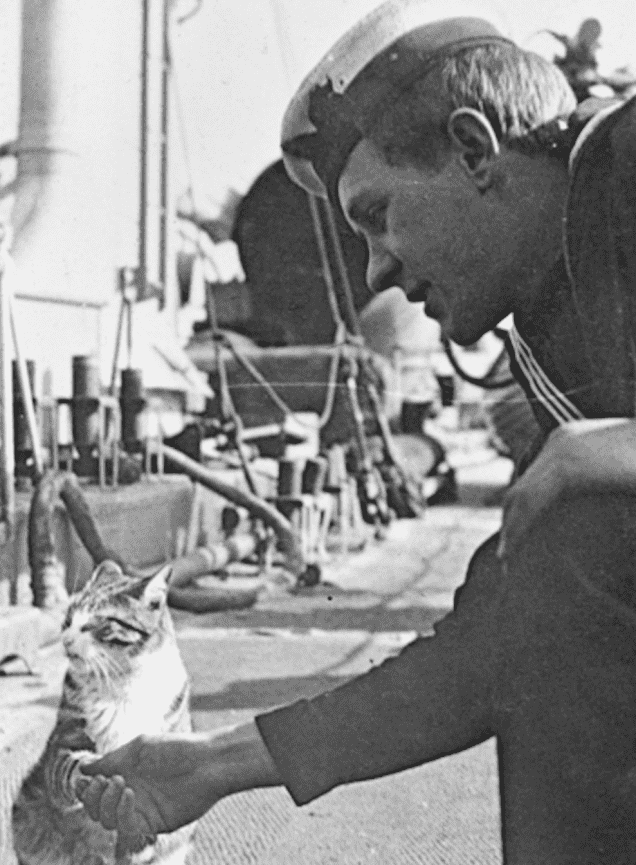 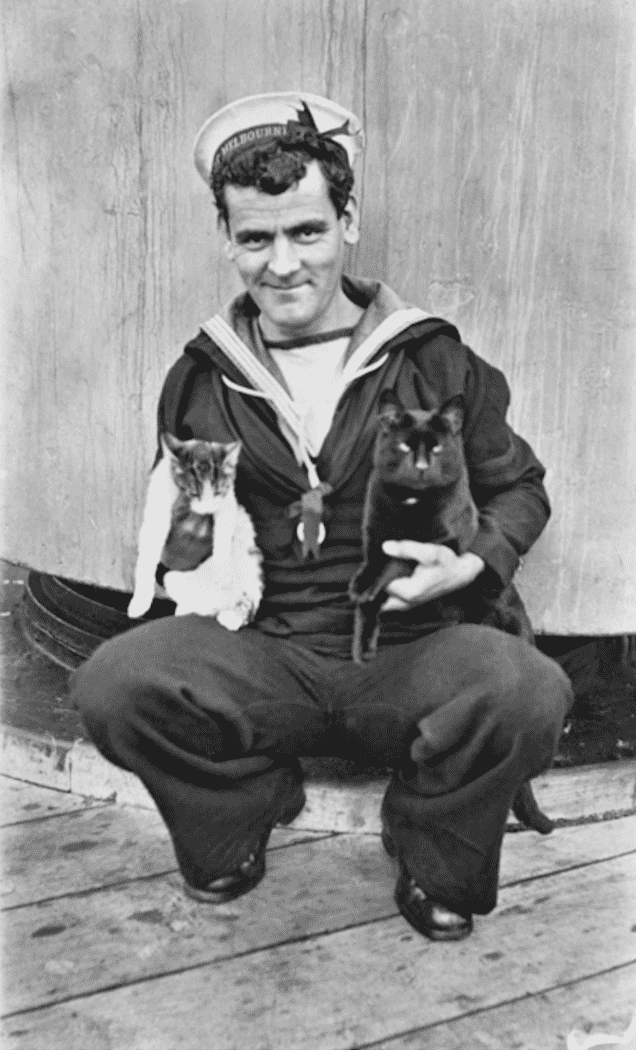 Ensconced in an opening in a sandbagged dugout, a cat, probably a mascot, looks up expectantly at the approach of an unidentified soldier. Gallipoli Peninsula, 1915. [Australian War Memorial] 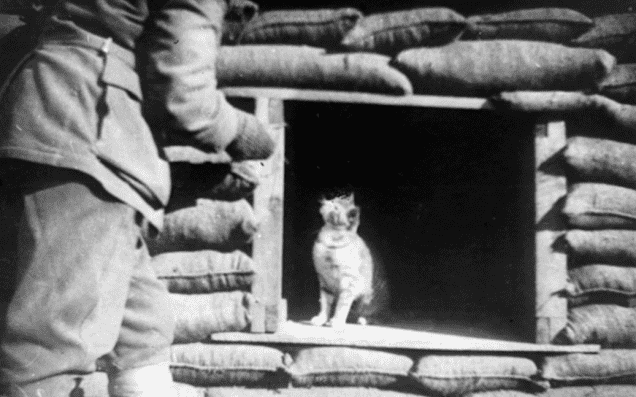 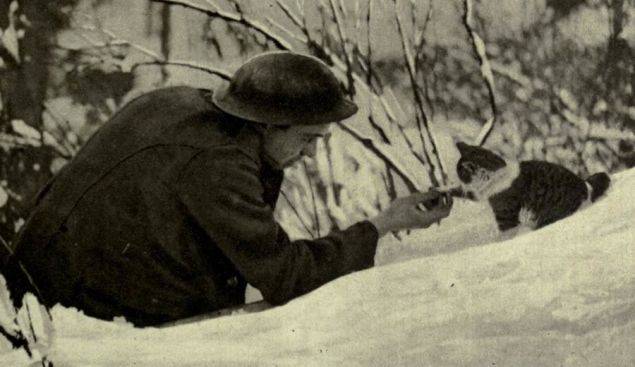 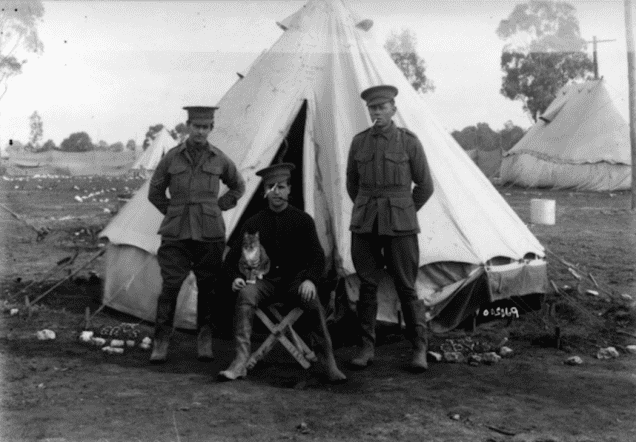 And, lastly, “Pitouchi” (photo below) was born in the trenches. His mother was killed when he was a kitten, and he was adopted and nursed to health by Lt. Lekeux of the Belgian army. According to the book, Soldiers in Fur and Feathers, by Susan Bulanda, the cat followed the officer wherever he went, and one day saved his life:

As Lekeux reached a spot near the German lines, he saw that they were digging a new trench. He hid himself in a shell hole nearby to make a sketch of the German works. He was so absorbed in his sketch that he did not notice approaching German soldiers on patrol. When he finally realized his situation, it was too late to run.

He decided to lie very still, hoping that the Germans would not see him, but unfortunately he heard one soldier say, “He’s in the hole,” so he knew he had been seen.

When Pitouchi heard the German say that, he jumped out of the hole onto a piece of timber. The Germans were startled and fired two shots at Pitouchi. However, as frightened as he was, Pitouchi was not hit, and he jumped back into the hole with his beloved Lekeux.

The Germans laughed and joked that they had mistaken a cat for a man and left. Lekeux finished his drawings and returned to the Belgian lines with Pitouchi on his shoulders. 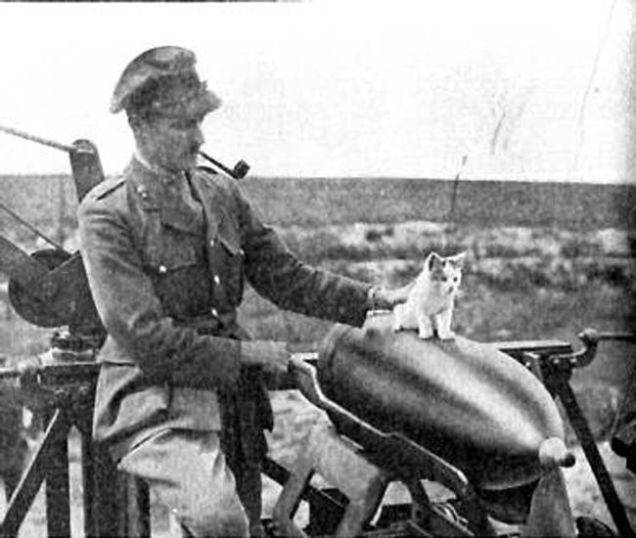 Hope you enjoyed this.

Thanks and don’t forget you can now follow us on Bloglovin by clicking here.

42 thoughts on “Mews: The amazing and brave cats of World War 1”