Cat lovers across the UK have a lot to celebrate this Black Cat Day (27 October) as Cats Protection announces that black and black-and-white cats are no longer as overlooked as they once were.

A decade after the awareness day was started by the charity as a response to the discovery that black cats took longer to rehome than other cats, they now spend 11 days less on average in care before being rehomed.

Around 65,000 black or black-and-white cats have been homed through Cats Protection’s adoption centres since the campaign started in 2010, which is 44% of all the cats homed through the charity’s centres.

Cats Protection supporter and musician Rick Wakeman is a big fan of black cats and says he always needs to have one in his life.

“We lost our first black cat Scrabble in a road accident many years ago and were heartbroken,” he said. “We then got a black cat from Cats Protection called George who we adored. At age 11, we lost George to kidney failure and once again were totally heartbroken. Then a friend of ours turned up with a little black kitten who, when he first came, shot up the false chimney breast and came down covered in cobwebs, so he sort of named himself Cobweb. Everyone adores him, he’s a little sweetheart. My wife and I will always have a black cat. There is just something magical about them and once you have a black cat, you will never be without one.”

Over the course of the campaign, Cats Protection has explored reasons why black cats were less popular and worked to change adopter perceptions and buck the rehoming trend.

Among the ideas challenged have been that black cats have been seen as unlucky, associated with the supernatural or are not photogenic in selfies.

“It’s brilliant news that our campaigning has paid off and we’ve made a real difference,” said Cats Protection’s Head of Operations Susannah Pritchard. “Black and black-and-white cats now spend less time in our care than when we started promoting the issue and, each year, we get thousands of cat lovers celebrating the day and engaging with our #BlackCatDay hashtag on social media.”

To find out more about Black Cat Day visit www.cats.org.uk/black-cats and those interested in adopting a cat can visit https://cats.org.uk/find-a-cat

Susie Taylor (48) from Dorset credits her black cat Rosie for helping her through a difficult time during lockdown when she contracted COVID-19 while working as a healthcare assistant: “I was feeling very low and isolated as I had to leave my home where I lived with my elderly mum. I thought a cat would help so I took in one-year-old Rosie from a local shelter who’d already been rejected from four different homes. She was so scared at first and spent her first week under my bed but she gradually started to trust me. Just having a cat with me made me feel better and I really feel she helped me get better faster and got me out of a very low place.” 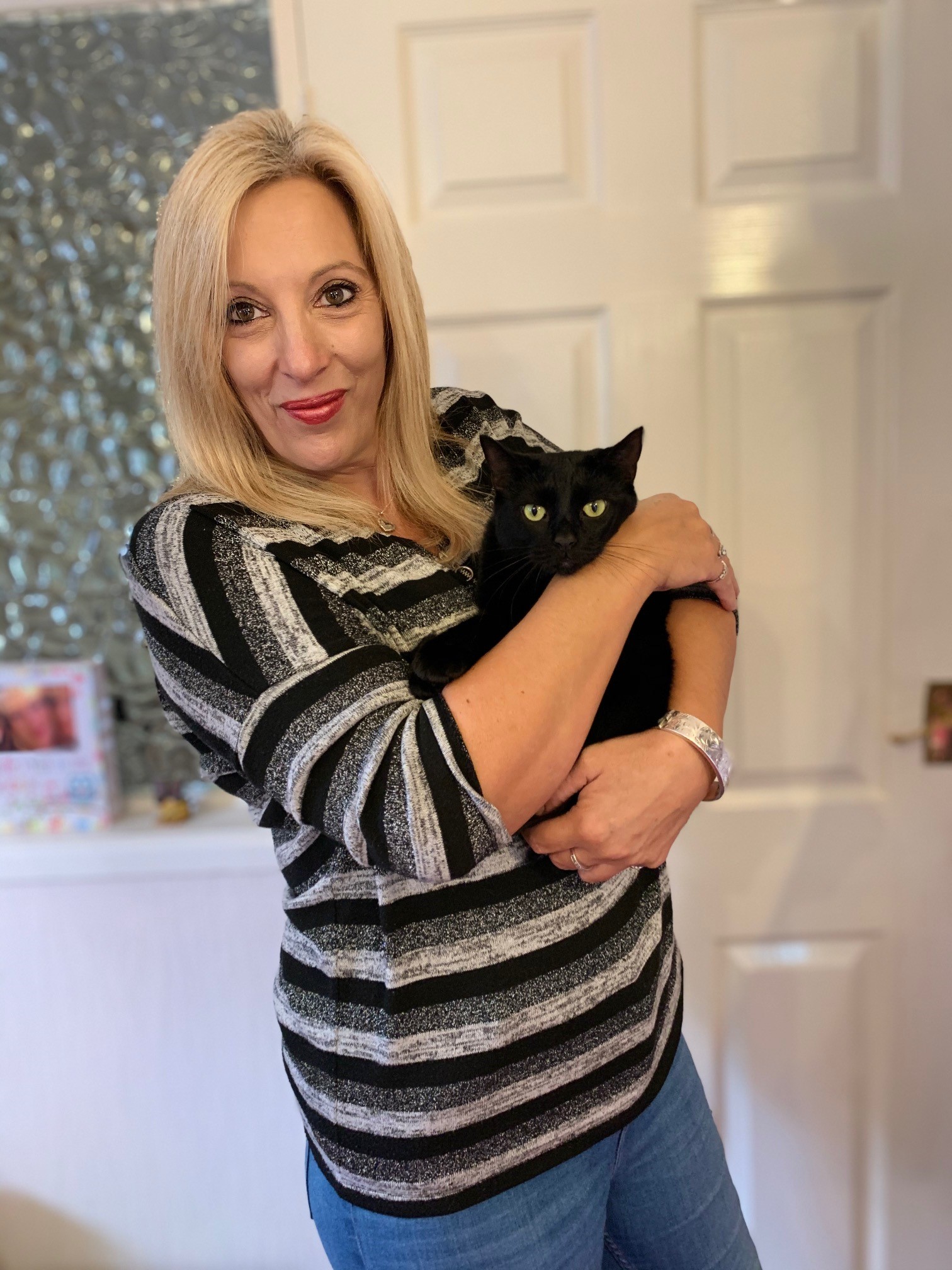 Chris Jurczak (57) from Sutton Coldfield had two strokes in the space of a week four years ago and was in hospital for over two months. It hugely impacted his speech and he had to relearn how to read and write. Once he started to recover, his daughter Ellen was worried about him being on his own so found him a black rescue cat called Shadow. “He was a bit apprehensive about the idea of caring for a cat by himself but was quickly won over by this gorgeous, easy going black cat,” said Ellen Jurczak (29). “I’d been worried about leaving him but, as I went out the door, he had Shadow in his arms and was absolutely beaming. Since then, the two have been inseparable. Dad had been really struggling to sleep but, once Shadow moved in and started sleeping on the bed with him, he was much better. It was also good for him to have the structure and routine of caring for a cat and helped him remember the things he needed to do each day – like taking his medicine. Shadow is great company for dad and he can talk to him without feeling anxious about people judging him for getting his words wrong. His journey to recovery has been long and challenging but Shadow has been there with him throughout. I really do believe he has made a huge difference.” 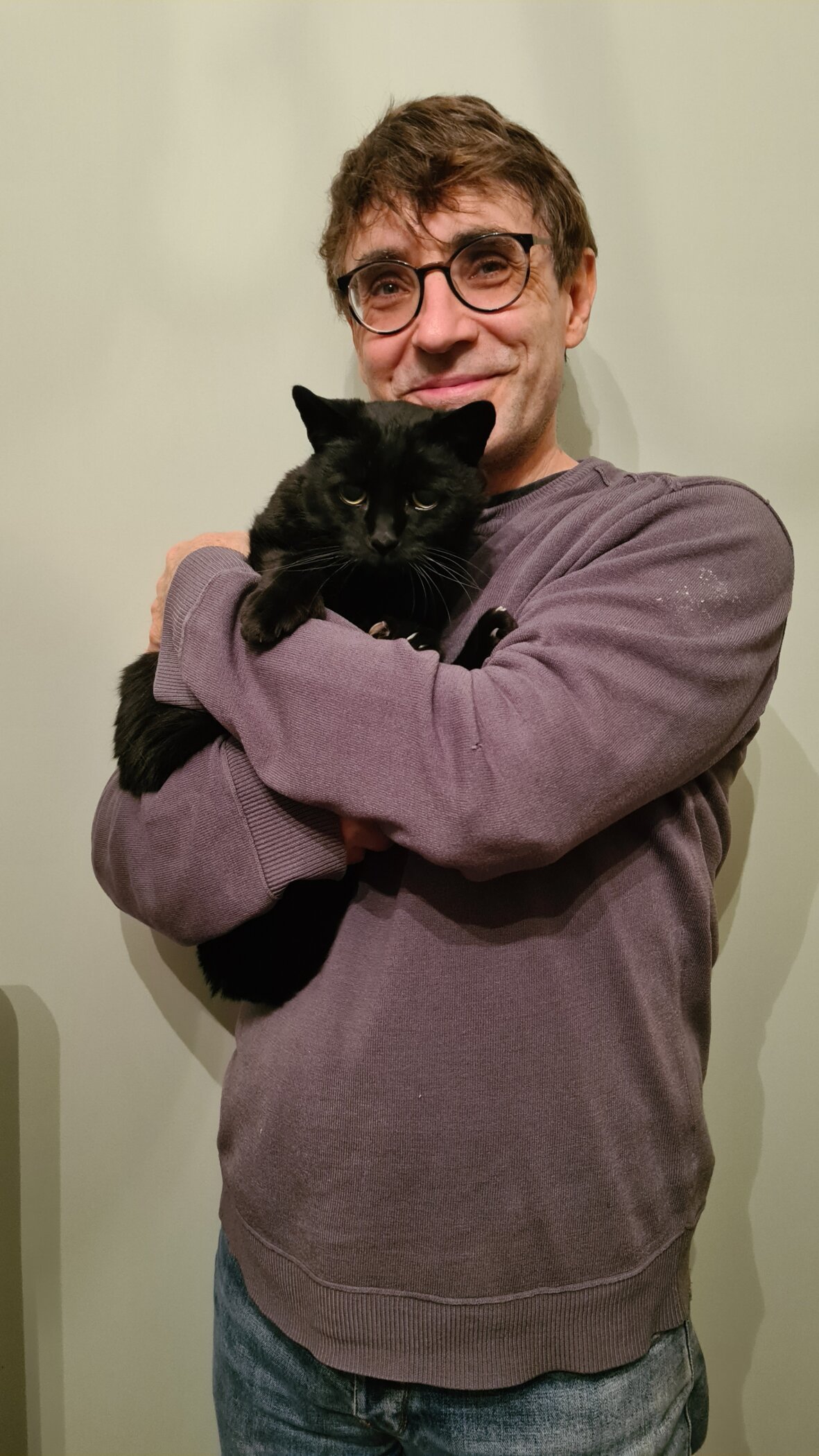 Jacqueline Wilkinson (35) from Croydon credits her black cat Cleo with supporting her through a difficult few years: “My ex-husband and I adopted Cleo three years ago. Since then she has supported me through various illnesses and ailments. She never left my side when I broke my arm – as well as a divorce and moving house. The last eight months have been particularly intense for the whole country and I’ve recently been off work with stress. Cleo has provided company, warmth and love over this time, as well as participating in my afternoon video meetings when I am working! I may well have gone mad without her.” 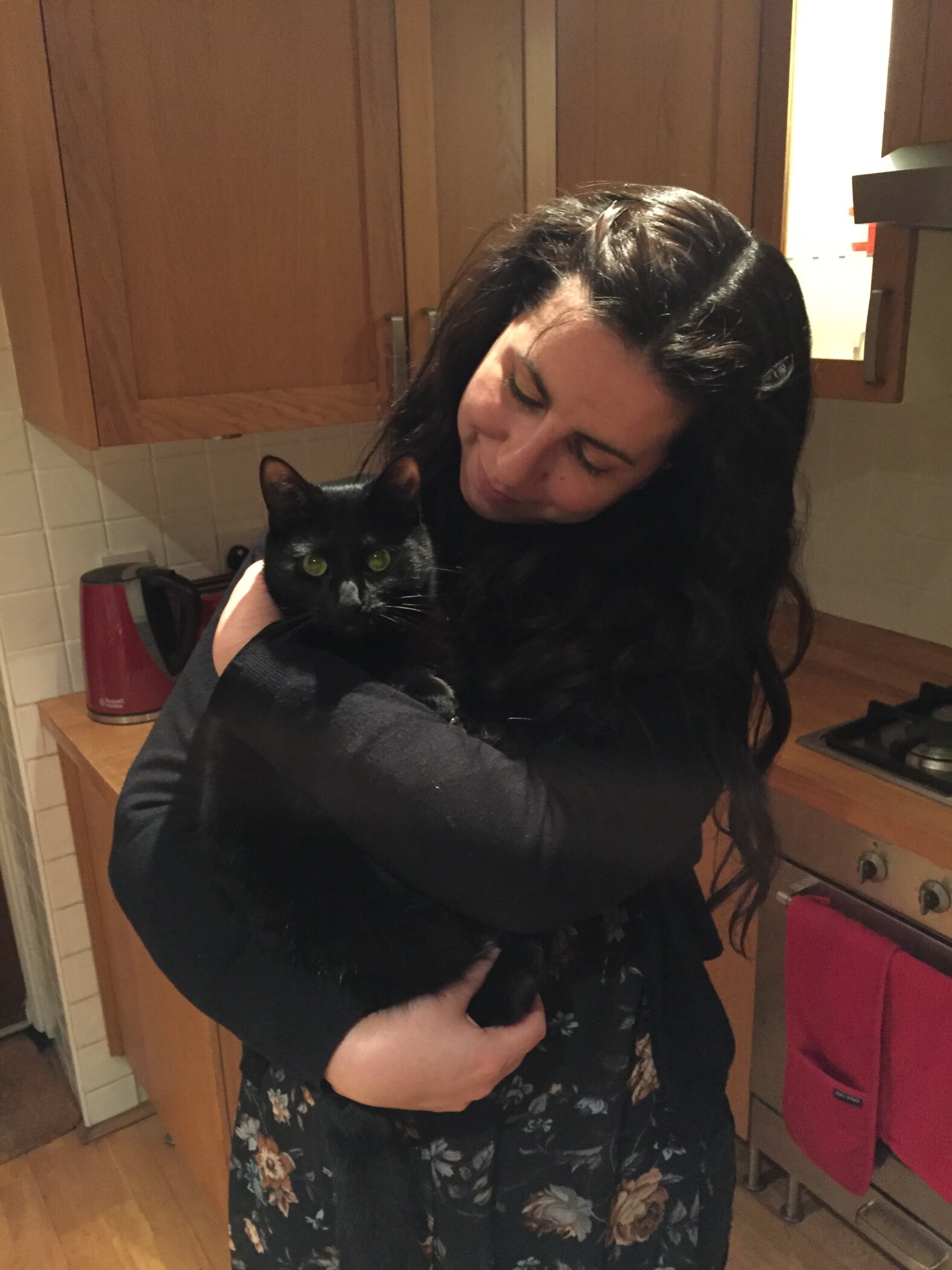 Liz Parsley (38) from Billericay, Essex, said her black cat Buster saved her from loneliness during the pandemic: “I live on my own and normally work long hours in London. When lockdown started I was incredibly grateful to be able to work from home but within a few days the working day had become my whole day – and much of my night as well. After a few weeks the lack of human interaction really started to hit me and my motivation and productivity felt like it was dropping off a cliff. But my black cat Buster wasn’t having any of it. He wanted to eat and his meowing became my new alarm clock! When I was feeling super stressed at work, or generally anxious about the pandemic, I’d hunt him out for a stroke and belly rub. His snuggles and purring became my daily meditation routine, where I could take a breath and clear my mind. I know that my lockdown experience has been easy compared to so many people, but the isolation and loneliness really got to me. I honestly don’t think I would have survived being on my own for such a long period of time without him. He kept me in check and reminds me to be grateful every day, no matter how hard things get.” 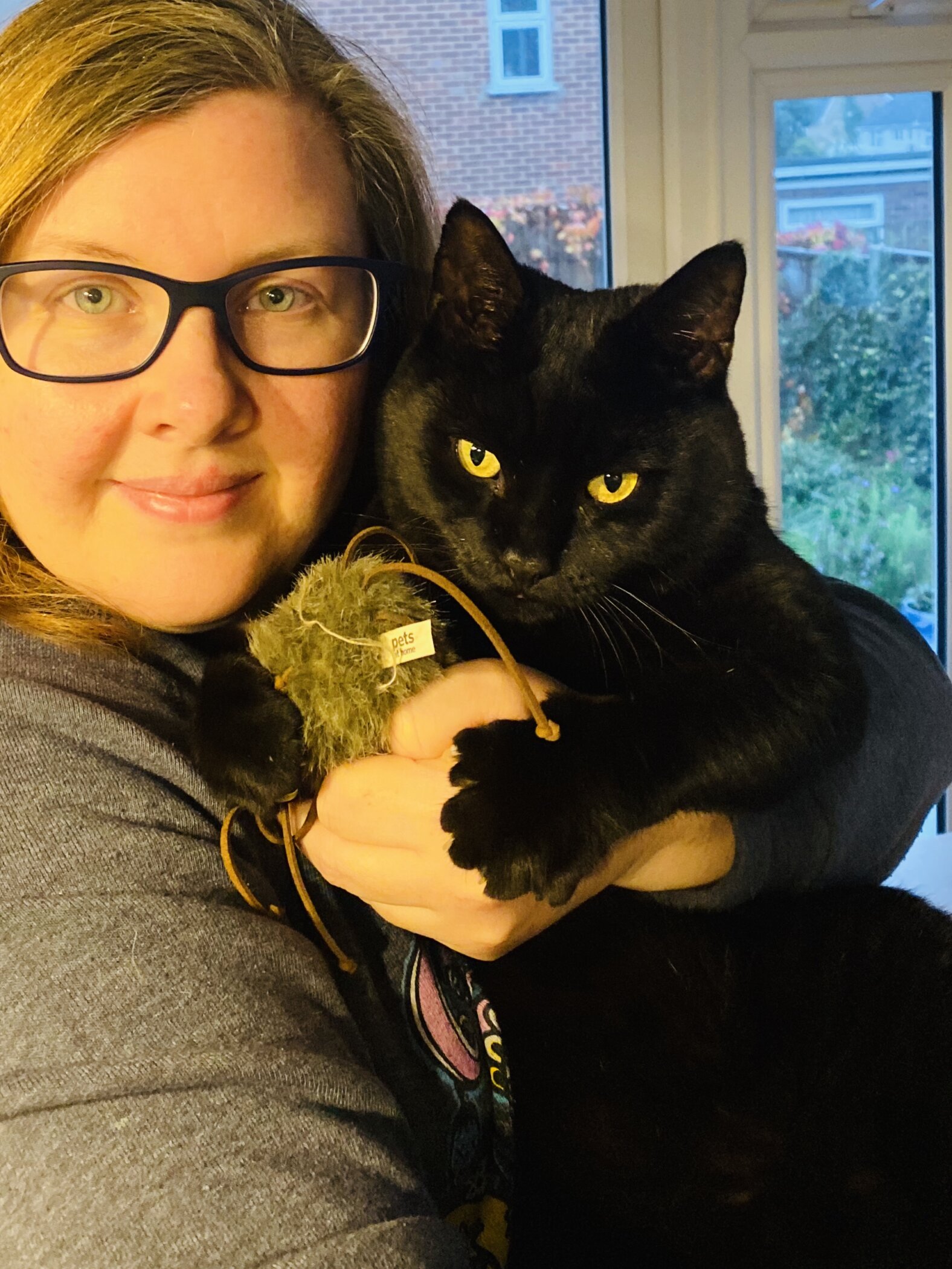 Gavin Harvey (28) from Glasgow adopted Shadow from Cats Protection after he moved into his own house: “I was sad as I suffer from anxiety and depression and it was my first time living alone. 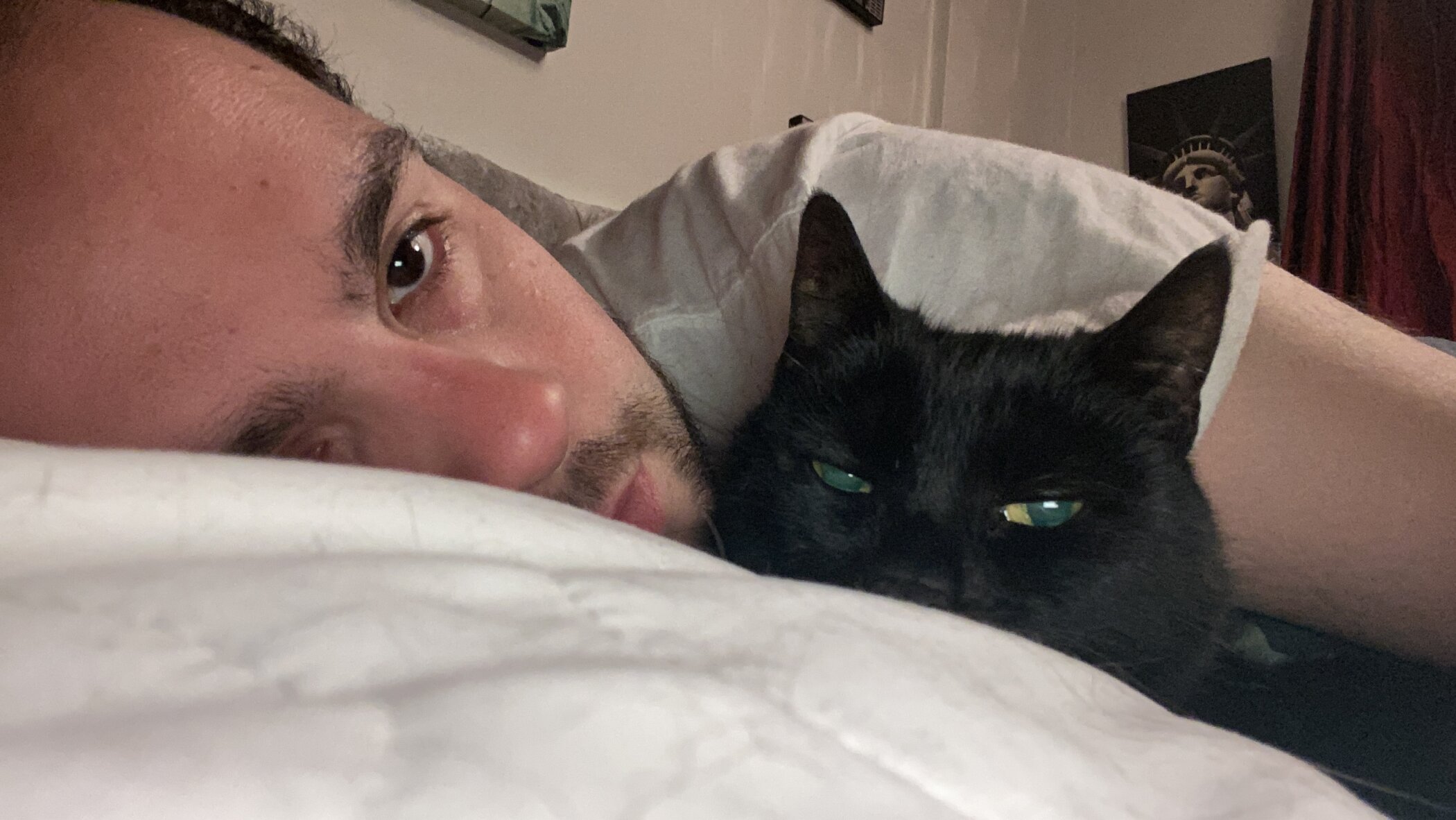 I’d always had pets and it was hard not having something to love. I was very lonely until I met my beautiful girl she changed me and helped me get over the loneliness. She was sad and I was sad and now we’re happy together. She’s the best thing to ever happen to me. I’m also a crazy cat daddy and I have her face tattooed on my hand!”