Until one has loved an animal, a part of one’s soul remains unawakened.

After ending the job-offer phone call, I enthusiastically screamed, “Hurrah” to Shadow.  “I have a new job and we are moving.” Shadow looked at me as if she understood that our lives were about to drastically change. After a year of looking for work, we were about to move from the Pacific Northwest to Charleston, SC.

I immediately created a lengthy “to do” list, with ”SHADOW” at the top. My intention was to drive, taking Shadow with me. However, family and friends tried to talk me out of that, saying how difficult it would be as I would be traveling solo and had to be in South Carolina by a certain date.

Neighbors said they would mind Shadow and I could fly back for her but to me, that was not a viable option.

When I brought Shadow to the vet and asked her what she thought, she immediately said “Shadow has to go with you!” She explained that Shadow would adjust to the car travel and spending nights in different hotels as she would be with me. However, if I left her with a neighbor, she would feel rejected and abandoned, especially since she was an older cat.

After I told my family and friends what the vet said, there was no more mention from them of Shadow not accompanying me. With my #1 priority worked out (more or less), I went about making plans for the move, finding an apartment on-line, working with a moving company and mapping out the trip.

Boxes began piling up and Shadow was an integral part of the adventure. She climbed on the boxes and seemed at times to be supervising the packing.

Saturday night, I packed my Focus, putting luggage in the trunk which I would not open until we arrived in Charleston. The back seat had my overnight bag, laptop, and Shadow’s gear: disposable litter pans for each night at the hotels, food, toys, favorite blanket and cleaning supplies. Early Sunday morning, I gave Shadow the tranquilizer the vet had prescribed.

We set off on a beautiful clear day.  As the navigator, Shadow was in her carrying case, in the front passenger seat. She meowed quite a bit as we commenced our journey, but later listened to music and my descriptions of the passing scenery.

On the first day, I noticed that Shadow was very stressed (from the tranquilizer?) and the next morning, she did not want to take it. And rather than forcing it on her, I thought OK, let’s see how she does. She was so much better … meowing a bit when we started off early in the morning, but then relaxing and intently watching me.

Our first two days were uneventful. We’d leave early in the morning and check into the hotel mid-afternoon and I’d bring Shadow into the room, let her out of her carrying case and then unload the back seat of the car. On day 3, I did that and then realized that I did not see Shadow in the room. I panicked thinking that I’d driven half way across the country and had lost her!

No Way! I looked under the bed, in the closets, checked the parking lot (had she gotten out when I was bringing things into the room?). I was frantic and then I heard a noise.

Yes, there was a meow coming from under the bed. But not really under the bed – instead, somehow Shadow, very petite Shadow, had gotten under the mattress. How did she do that?? I partially moved the mattress and she was able to get out. I left it like that until we left the following morning. Thereafter, I brought Shadow into the room first, followed by all of our luggage and then let her out of her carrying case to explore.

on top of the world (OR hotel)

Resting on my sweatshirt

She loved the adventure of exploring a new room each afternoon and evening. She enjoyed looking out the windows and was especially fascinated if she saw birds or a dog. She slept next to my pillow and seemed to sense that we were getting closer to our new home.

Saturday morning we were close to Charleston. After breakfast, I went to put Shadow in the carrying case and could not find her. Now, where was she?? Shadow was hiding under the bed and I could not reach her. I found a broom in the hallway and coaxed her out, telling her that we were almost at our destination. That worked and she did not meow as we set out. Did she know that we were almost at our new home?

A few hours later, we arrived in Charleston. I got the keys at the rental office and brought Shadow into our new home. She was busy exploring the apartment and screened balcony while I emptied everything from the car. I had the week-end to play with Shadow, shop for food and buy camping chairs. Shadow and I slept on sleeping bags as our furniture would not arrive for about a week. ….. 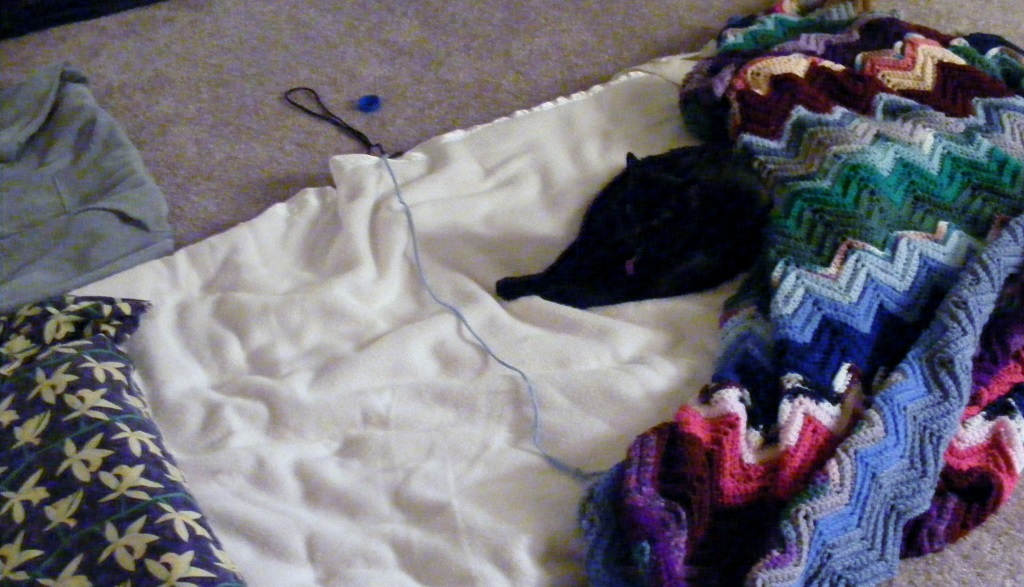