The cat who finds lost cats 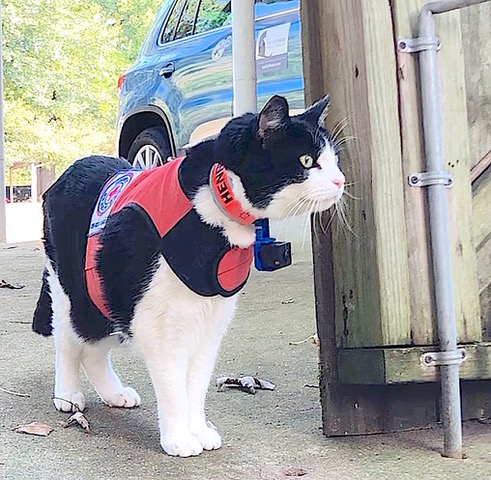 Hello, humans. My name is Henry.

I’m a Search & Rescue cat. Well, actually I’m in charge of the Search part. The Rescue bit is up to my partner, the Lost Cat Finder. She’s the one who busted me out of the shelter 7 years ago.

My job is to sniff out those naughty cats who escape their indoor homes. I track ‘em down and blow their cover. Hey, it’s for their own good.

It was back in 2013 when I finally got a job: the world’s first Tracking Cat. It was about time, too; those sniffer dogs just weren’t cutting it. Why? Because no cat in their right mind is going to let a slobbery dog walk right up and get in their face.

That kind of job takes a savvy cool cat in a full tuxedo. Of course, it doesn’t hurt to know a little friendly-cat tail lingo when you need it.

I was hired as soon as Kim saw me in my purple harness, lounging in the grass on a sunny Texas day. Up until then, I’d been wrestling Texas coyotes and big green curtains.

She took me to her ranch and I trained her to give me treats. We traded in my purple harness for an orange vest and my own Kitty Cam hooked to my Glow Track collar.

I’m quite impressive all decked out in my Search Cat uniform, don’t you think? The video camera necklace is so the humans can see what I see when I go to the underneath dark places they can’t access.

Like that one time when a kitten named Mo slipped out of a car at a gas station. The owner was two hours away when they realized it, so I got the job. I found little Mo’s hiding place, then Kim lured Mo out with a recording of his owner’s voice.

A month later, around midnight, a pretty kitty named Claire fell out of her carrier on the way to the vet. I got called in to track her down. I found her in ten minutes, but it took the humans two hours to lure her out.

My latest case solved was a deaf kitty named Violet, She slipped out when a pet sitter was in charge. I got called in 9 days later, after they’d given her up for dead. I tracked those little kitty paws down a hill to a shed where she was hiding in the dark, scared and silent.

So who says  cats don’t wanna work? It just has to be a really cool job.

At last I found a human partner who cares about lost cats as much as I do.

Next time you see me, offer me a martini. I like it shaken, not stirred.

The Lost Cat Finder team of Kim Freeman and Henry the world’s first and only tracking cat can be found at LostCatFinder.com. They also star in a video called “How to Find a Lost Cat” which comes with a booklet revealing all their nifty methods of tracking down lost cats. Find their latest adventures on Facebook at LostCatFinder

15 thoughts on “Henry the Search Cat”