Bringing a new cat into a home where another cat has been living for ten years is a tricky business.

My husband and I had two cats – Cookie and Marlowe – for ten years. They were brothers and we got them when they were five weeks old from an organization called Cats in the Studio. The Studio is Warner Brothers and in the 1930s it had a rat problem. So James Cagney suggested the studio get cats. Then it had a cat problem, overpopulation. That’s when a secretary for the company decided to start Cats in the Studio. The organization would spade cats and give them to welcoming homes.

Our two kitties were together from day one.  As kittens, they played until they plotzed. In time, Marlowe lost interest in playing with Cookie. They would occasionally chase each other, but Marlowe soon would get pissed and hissed at Cookie. So eventually Cookie who loved to play didn’t have another cat to play with. We would play with him, but he didn’t have a feline playmate.

Marlowe, when he was about seven years old, got kidney disease, and became very thin. But otherwise he was fine. He had a voracious appetite but never gained weight. Then when he was ten, he started to act weird. He would disappear and would hide for long periods. Cats often do this when they are sick or about to die. Then suddenly he took a turn for the worse. And within a week he died. It was difficult for me. He was my baby and a companion, and would often lie on my desk for hours while I worked.

Though they didn’t play together, Cookie and Marlowe were together since birth. They didn’t seem close but were a daily presence in each other’s lives. I thought that Cookie seemed a bit lost without Marlowe. My husband didn’t agree with me. He said that cats didn’t have those feelings. After about two months we started thinking about getting another cat to keep Cookie company. Then the big question became:  When? How long do we wait before we introduce another kitty to our family?

Bringing another cat into a house needs planning. Years ago, when we brought Cookie and Marlowe into our home, we had a black cat named Baby Kitty. We didn’t do a good job of introducing the kittens to him.  Baby Kitty was a loving and sensitive kitty. Yet he was antagonistic to the new kitties from the get-go, and it took almost a year before he accepted them. But he never truly accepted Cookie, who desperately wanted Baby Kitty’s to be his friend. He loved him but Cookie was too rambunctious for Baby Kitty. He would often playfully sit on Baby Kitty’s head just for fun. But Baby Kitty would have nothing to do with him. So this time we wanted to do a good job of introducing our new kitty to Cookie. We read up on it. And one of the suggestions we found is to keep the cats in separate rooms for maybe two weeks.

We went to our local animal shelter. It was a noisy place with lots of barking dogs in large cages and families wandering from cage to cage. There were a number of rooms that had cats in small cages. We went through the rooms, but sadly none of the cats appealed to us. We wanted a kitten and most of the cats we saw were older. The people who worked there were friendly. But there was a sadness about seeing all the cats, of different ages, in cages. Though the cats were well cared for, it seemed like a cat jail to me.

A couple of days later Bob was looking through the shelter’s website and saw a photo of a kitten that jumped out at him. We went back to the shelter and found the kitty. It was a female. In the past, we had only male cats. The kitty was in a cage with her sibling. She was tiny with grey and black stripes and looked scared. Who could blame her for being scared? People were constantly walking by, staring at her, picking her up, just like we picked her up. We decided to take her. We felt guilty about separating her from her brother, but we could only deal with one cat. We couldn’t take the kitty then, because she had to be fixed. We were told to come back in three days. We couldn’t put a hold her and were told she would be ours if she was still there when we came back.

When we returned, thankfully she was still there. We filled out the paperwork, paid the forty bucks, and she was ours. We put her in our yellow carrier and drove her home.  Driving home we started to play the name game. What should we name our little girl?

At home, Cookie was outside  in our enclosed backyard, so we rushed the kitty into the office. Before we left that morning we arranged an area for her in our already cluttered office with bowls of food, water, and a soft blanket. The instant we let her out of the carrier she looked around frightened and dashed to a hiding place. She disappeared into the sofa bed. We had difficulty getting at her and decided to leave her and let her adjust. We left the office and closed the door.

When Cookie came in the house he sensed that something had changed.  He sniffed until he got to the office door and knew immediately there was another cat in there. He did not appear to be happy with what he was sniffing.

Whenever we would go into the office, the kitten would dash back into her hiding place inside the couch.  However, she was eating and drinking whatever we left. We began to spend more time in the office, and she began to emerge. She started to feel safe with us. But any abrupt movement or loud noise and she would hightail it back to the safety inside the couch.

We kept mulling over names as we watched her emerge from hiding. But no name seemed to fit our little girl. We kept saying how  beautiful she was. How Bella she was. So eventually the name Bella stuck. It’s Italian for beautiful.

After a few days, Bella would let us pet her, and fairly soon she began to sit on out laps. It took years before any of our other cats did that.

We still kept the office door closed to keep out Cookie. Then from our hallway, we began to notice that Cookie and Bella were interacting with each other under the opening of the closed door. Bella would push her small grey and black paws under the door and Cookie’s big white paws would bat at them. He had an intense expression on his face as he did this. We caught them doing this a number of times, and thought this was a good time to introduce them.  So on New Year’s Eve, we opened the office door and let Cookie in. He cautiously entered.  At first, he did not see Bella. But when he saw her he immediately growled and hissed. Bella seemed frightened at first. Cookie is a big cat. He weighs eleven pounds and is covered with a thick coat of luxuriant white and orange fur which makes him appear even bigger than he is. Bella was a little bit of a thing, maybe weighing four or five pounds, with grey, black and subtle orange stripes.

Cookie was not happy to see Bella. Cats are creatures of habit, of routine, and the introduction of Bella was an interruption to his routine. He had a good thing going since his brother passed. He was the center of our attention, the cock of the walk. Cookie got closer to Bella and growled and hissed again. This

frightened Bella. So we decided to cut this meet and greet short. 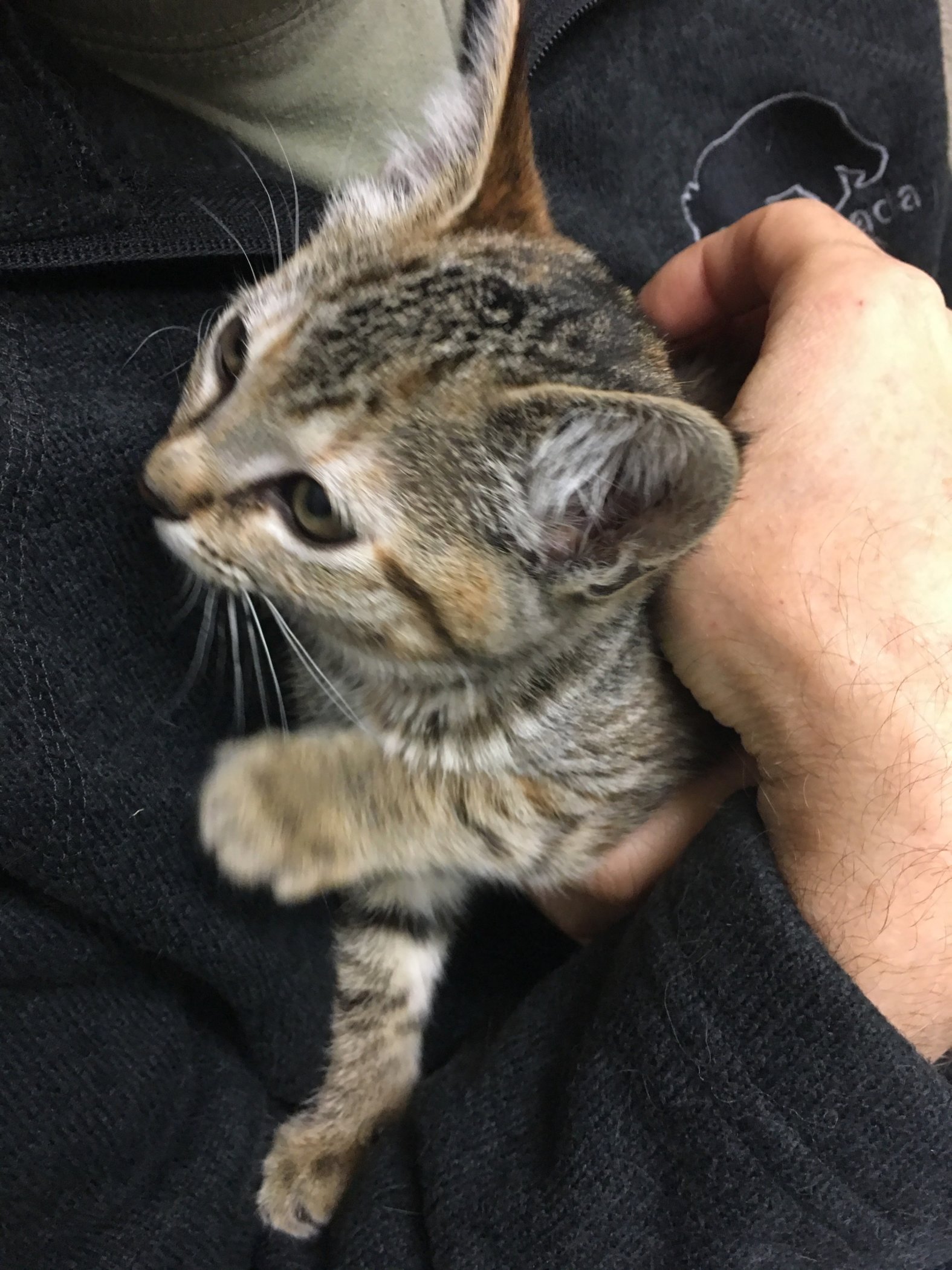 So we let Cookie out of the office and closed the door. Maybe our introduction was too soon. The thing about Cookie is that he is a gentle, sweet kitty, and the only time he gets angry is when we cut his nails.

A few days later, we let Cookie back into the office. He still growled and hissed, but they were a bit more tempered this time. Bella, however, was no longer frightened of him. Being a kitten, she wanted to play. This little bit of a thing went up to this huge fur ball and began to bat at him. Cookie hissed and growled but did not attack her. The hissing didn’t deter her. She kept trying to engage him.  But he wanted nothing to do with her.

After a few days, we decided to leave the office door open and give Bella the run of the house. As Bella began to feel comfortable and secure, she began to pursue Cookie. But he still would have nothing to do her.  He would occasionally bat her at her, but mostly he would just sit and stare at this tiny bundle of energy. Bella soon got into a stalking pose and would playfully charge at Cookie, knocking him over. And then they began to run after each other and tussle. This was something to see: this kitten rolling around with this ball of fur.

Their scuffling became a regular activity. Bella would often knock Cookie to the floor so that his legs were up in the air exposing his snowy bottom, and then they would roll around. This would end with them chasing each other around the house. Then eventually they began to sleep together.

Cookie finally had a playmate – one that often frustrated him –  but one that he accepted into the family.

I live in Southern California with my husband Bob. We have been together for 24 years. While together, we have had 4 cats. Two have died, BooBoo Kitty and Baby Kitty. The two cats we now have are Marlowe and Cookie. The are bother and are 10 years old.