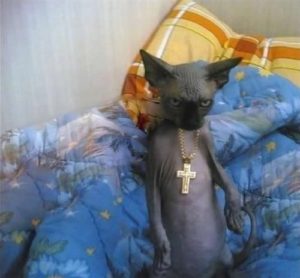 “Well, here’s the latest buzz as it went down:
A lot of ruckus here went on downtown!
I come to you from the Fly on the Wall
Reporters: breaking news to one and all!
The Feds are the first ones who got a bug
Within the flat to apprehend this thug!
Specifically, (we live in a strange era!)
A loyal brave Asilidae Diptera
Led our Bombyliidae t’record the sting:
This is the way it went down: everything!
Now, first you’ll hear the Tomfather himself,
Before the Feds all put him on the shelf:”

“You’re outta luck, Pal, now your tail’s all mine!
Hey, Pawvarotti, you think you’re so fine
That you can croon away my calling queens
And woo them off with gourmet catnip greens?
You’re dead, Pal! Now no dopey drooling and
Devoted Dobermans, however grand,
Can save you now, you Mook! Hey, Pal, you’ve met
The kitty godfather himself, who’s slashed a vet
And gored his face and arms to bloody scratch.
I’ve filched a fisherman’s most gorgeous catch.
I’ve torn silk curtains down, and clambered up
The virgin backs of velvet wing chairs. Pup
And cringing cur here knows that they’re all dead:
My thugs slink in? They shake and pee in dread!

“Who sent you, Bub? You’re someone’s fair furred boy:
The type that prances with a catnip toy:
An indoor cat purrhaps, who’s never brawled
Nor run a cat house, nor a butcher mauled!
Bub, I’m the fat cat who gets all the cream!
I’ve humans at my beck and call who scream
If anything upsets me: I command
A pack of feral cats too, understand?
My feisty feline femmes, you fricken feeb,
Will drag you by your tail, you dolt, you dweeb!’

“With this there was a silence and a pause,
As our cat chose his meows and flexed his claws.”

“Your cat house queens? You treat them all like dirt.
Don’t lie to me! And each one licks some hurt!
Those dames? We hear them caterwaul all night
And day — we know their fur must be a fright,
Their litter boxes filthy, and their beds
All piles of rags. Yeah, Bub, I’m from the Feds!
I’ve come to meet and bust “The Naked Kitty” —
That’s what they call you through this whole dark city!
Yeah, Bub, I’m from the Feline Bureau of
Indifference: we’re giving you the shove —
Ignoring you! Yeah, it’s the ugly end!
Your ragtag gang? We’ve paid them off, my friend!
They’ll all disdain you now: we’ve used some grease,
And now the city finally will have peace!
I’m the Main Coon cat and I’m called the Fuzz!
You’ve heard of me from whereabouts: the buzz
Around me and my catercousins spreads
Like catnip over well made feather beds,
Or rumor on a tedious afternoon:
We’ve shut you down: now hear which cats will croon!

“Yes, your whole gangland empire’s at an end!
You’re caught in kitty trafficking, my friend,
Across state lines: lured kittens underage
And promised rhinestone collars, all the rage
In all the Uptown Fine Feline Couture,
And all their glamour and regal allure, —
Sweet kittens that you’ve suckered into vice,
And bullied into doing things not nice.

“Now they’ll have Uptown homes and human slaves
At their sweet mew and call, for our kind saves
Their pride and honor! There’ll be pillows, silk,
And Fancy Feast in crystal, bowls of milk,
And Science Diet and fine quiet vets,
Now that we’ve finally caught you in our nets.”

“With that the felon’s whiskers finally droop:
That’s it, my friends, you have here the whole scoop!”

With that the bee fly buzzed his gorgeous wings,
Antennae sleeked, and to the next job springs.

Author Notes
After I showed him the photograph, Blaze Achew Panda-monium , cat editor extra-ordinaire, and catagorically magnificent poet and Sublime Mews Himself dictated this to me: I’m not sure I’ve gotten all of it right, — however, he became tired after licking his usual bowl full of ice and curled up on the bed, and I know better than to disturb him. Asilidae Diptera: Robber Fly: funny he was on the good guys side, yet he was very inconspicuous. This Bombyliidae was not a bumble bee but a bee fly: a fine reporter! Knows all the latest buzz!

3 thoughts on “The Naked Kitty”