A friend of mine found kittens abandoned in her driveway. Tiny little kittens, taken away from their mother and dumped in front of someone’s house. Who does that to living creatures? ASSHOLES! That’s who.

She was looking for a home for them and I volunteered to take them. Tiggy just can’t keep up with the rats in the barn. I have no idea how old he is (he isn’t young) or what kind of life he had before straying onto the farm, but I’m pretty sure he was never in a barn or even outside before in his life. He has adjusted amazingly well and seems to love his new life. But, he needs reinforcements. 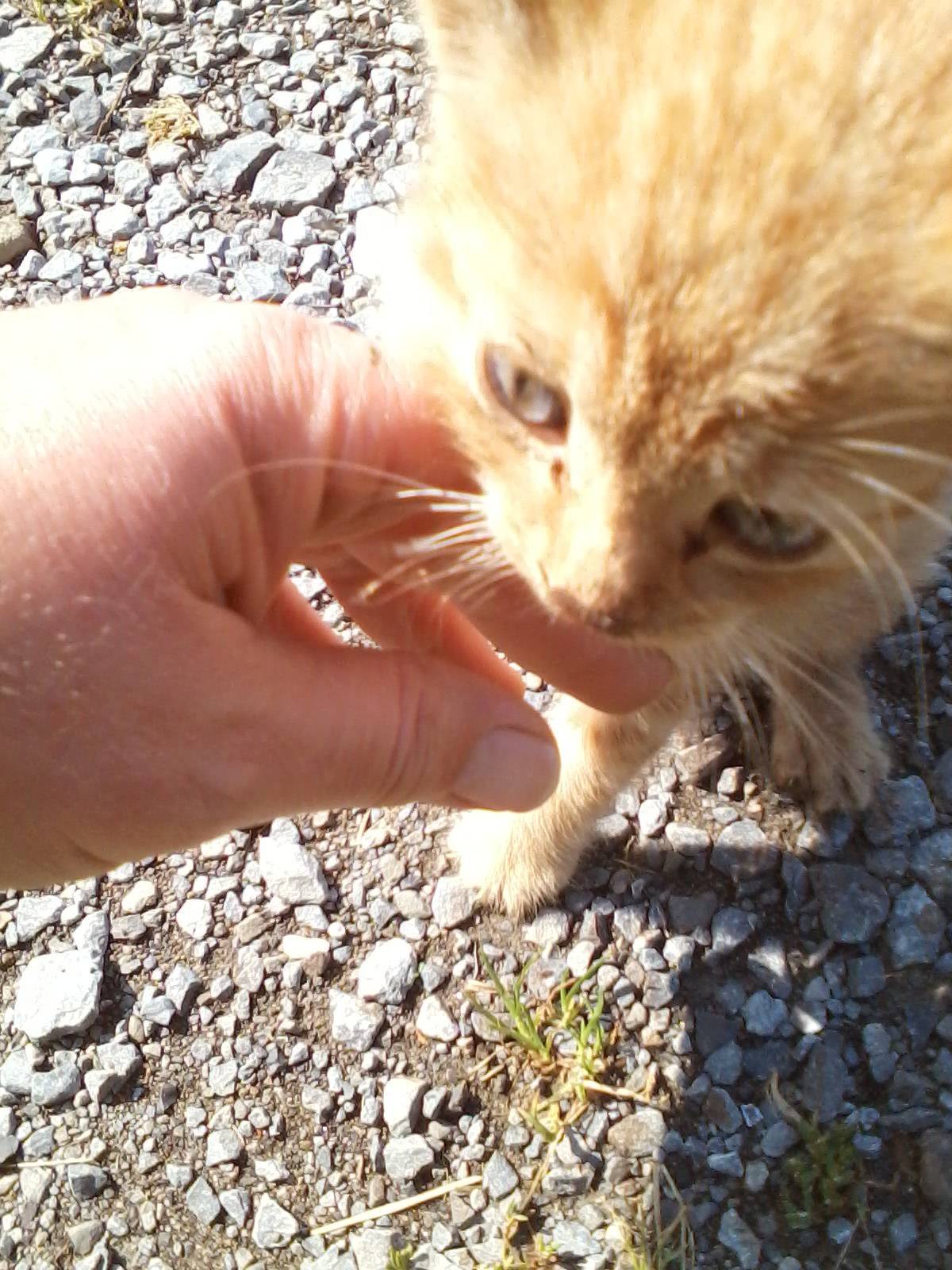 So, Shauna brought me these 2 tiny kittens Friday night. She had been bottle feeding the smaller of the two, Echo. She said Echo was the weaker of the two and she didn’t eat much or seem to put on any weight. Sadly, Echo did not make it through the night her first night here. She was just too weak. She probably would have grown up fine if some asshole did not tear her away from her mother too soon. Milk replacer is no substitute for mother’s milk.

The second kitten seems to be doing very well. She is stronger than her sister. Shauna had tentatively named her Goldenrod, but after having her for a couple days I have renamed her Cookie.

She made it through her first night in a strange place just fine. She didn’t need a little kitten bottle do drink her milk replacer. She was able to lap it out of a bowl. That first morning my little nephew played with her for a couple hours and wore her right out. She was sound asleep by the time I finished with morning chores. She ate canned cat food and sampled some dry food as well. And drank some water. She used the litter box without me having to teach her.

This morning she was raring to go. I let her out of her kennel and let her run around. She went about exploring the barn, but always making sure she knew where I was. She was fearless, stalking the broom while I swept the floor. She  also kept trying to check out the hens, who tower over her. They freaked out every time she got too close. Too funny. I told her she was one tough little cookie.

I didn’t want to leave her unattended while I was in the haymow, so I took her upstairs with me. She didn’t like it when I pulled down the bales and the crashed on the floor. I looked around and couldn’t see her any where. I called to her and heard a meow coming from the stairs. She was half way down the steps. What a smart little cookie. Hmmm…

A tough cookie, a smart cookie. She is definitely a Cookie. Cookie loves attention. I’m not crazy about her trying to climb up my pant legs. But after I ignored her a few times she settled for sitting on my boot if I was standing still. She doesn’t like to let me get out of her view for more than a couple minutes. She will explore a little bit, then come back to see where I am. If I lose track of her I just call to her and she either comes to me or meows to me. 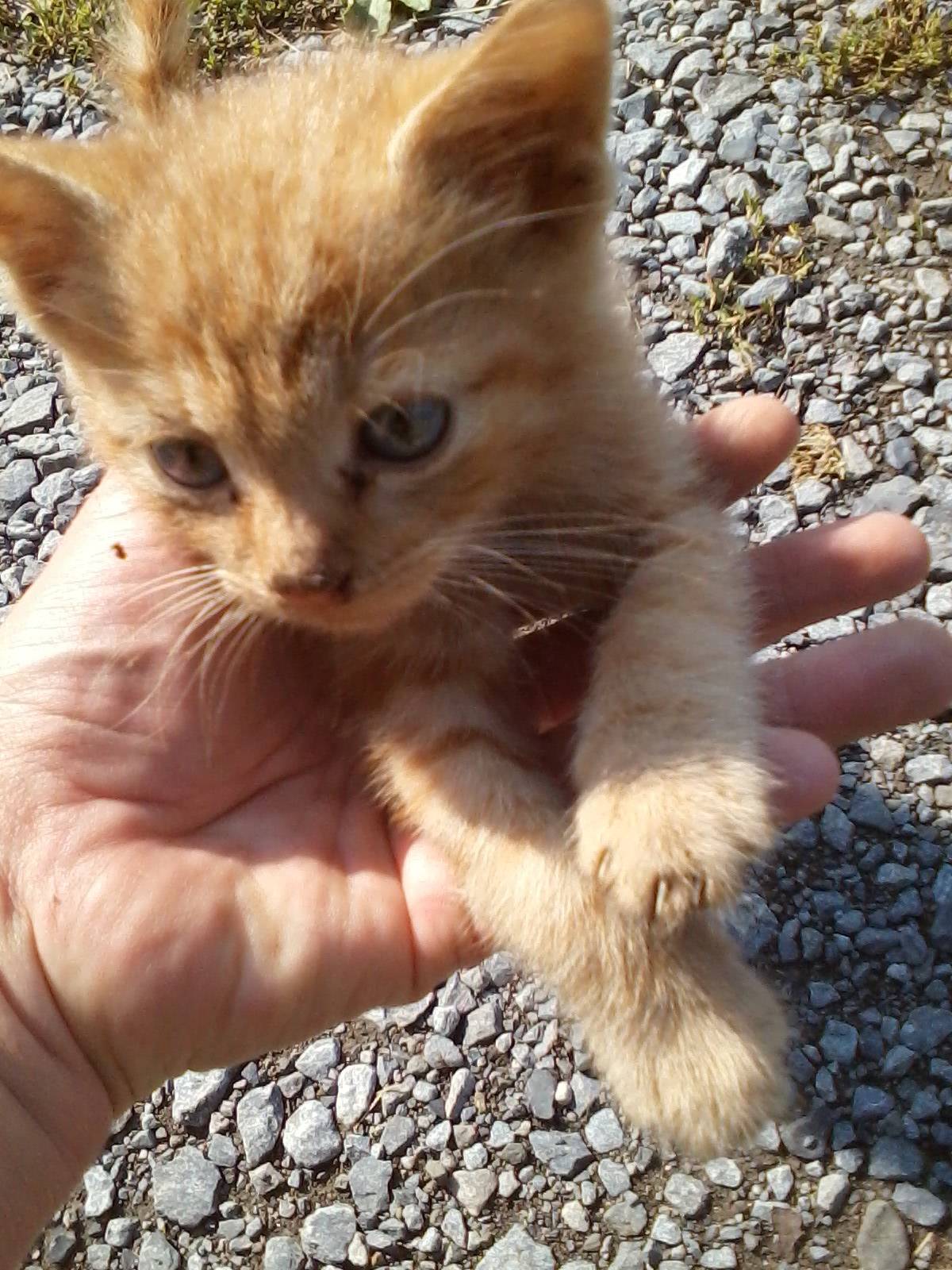 Tiggy has shown some mild curiosity toward her, but absolutely zero aggression so far. He will sniff her, but doesn’t like it when she tries to get too close. If she shows too much interest in him he runs away. I’m hoping they will become good friends once he gets used to her.

Oh, I really do hope she makes it. Kittens taken from their mothers too soon never have a very good chance. But I think Cookie is going to be one of the lucky ones.