Today’s guest post comes from Ranjeeta and I am afraid tissues will be required. :(:

“Sheroo stop it.. come back!!  Don’t chase the cat…!”, I vividly remember admonishing my youngest dog Sheroo, as he used to chase ‘Meaow (a stray cat)’ across my lawn and the vegetable garden for one whole year.  But little did I know that I would end up grieving for him later.

While lazing in the shade and enjoying the few me moments with only my dog by my side, I saw the cat cross my garden, but it was limping badly. I tried to go near it but it got scared and limped away as fast its 3 legs could carry him. According to him I was not to be trusted. Here I was a dog owner, whose dogs never lost an opportunity to chase him. Why should he trust ME of all the people…?

Then after a month it suddenly happened.  My husband had taken the elder two dogs, JW and Simba out in the garden to play and what do they find…!! A cat (Meaow) sitting bang in the centre of the garden and refusing to get up. He panicked and got the dogs inside not wanting a confrontation between both. We decided to let the feline be and took our dogs to our backyard. After that ‘Meaow’ maybe understood that we’ll not be chasing it away and started resting under the ledge of my kitchen window. I would find him there every day. With the mercury rising to 42 degrees, I decided to keep some water/milk for him to drink, thus started our bonding. Now he wouldn’t run away… either he decided to trust me or he was in lot of pain… either way it suited me fine as I could now feed him food as he had visibly reduced to half of his former self. 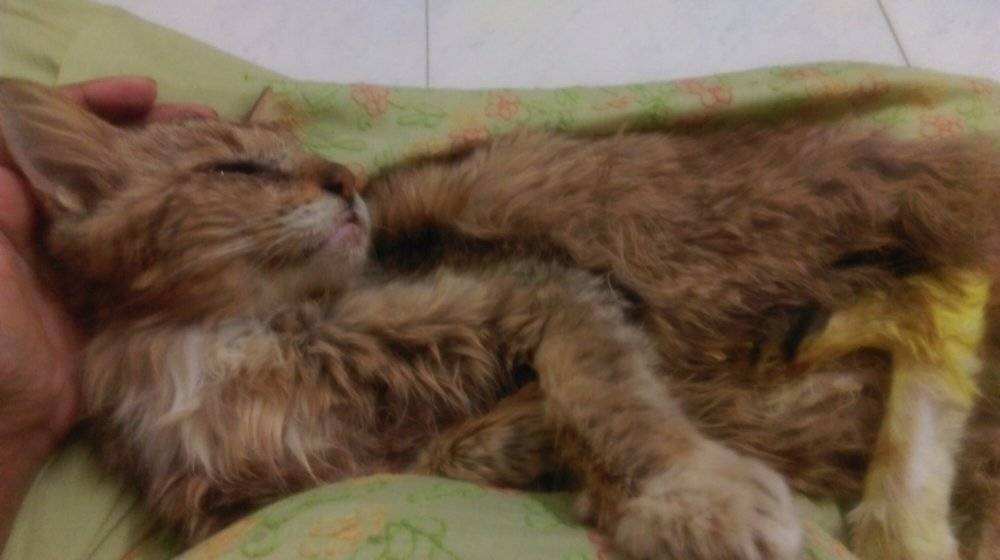 After 3 days he allowed me to stroke him and reciprocated back with deep purring, a raised tail and rubbing himself against my legs and back. Gradually I had the courage to cuddle him in my lap and he fitted in purrfectly, as if he belonged there. He was old…! Very old. Must have been somewhere between 15-17 yrs. He had only three incisors left, and his claws were either missing or broken at base. A combination of white, black and vandyke brown, light as a feather and beautiful as hell, he was very unique stray cat in appearance and had longish hair, like a Persian cat with flowing tail… He must have been an extremely majestic and handsome cat in his younger days, and to have survived so many years on streets  as a stray is a wonder… A stray doesn’t normally live up to being this old…!! 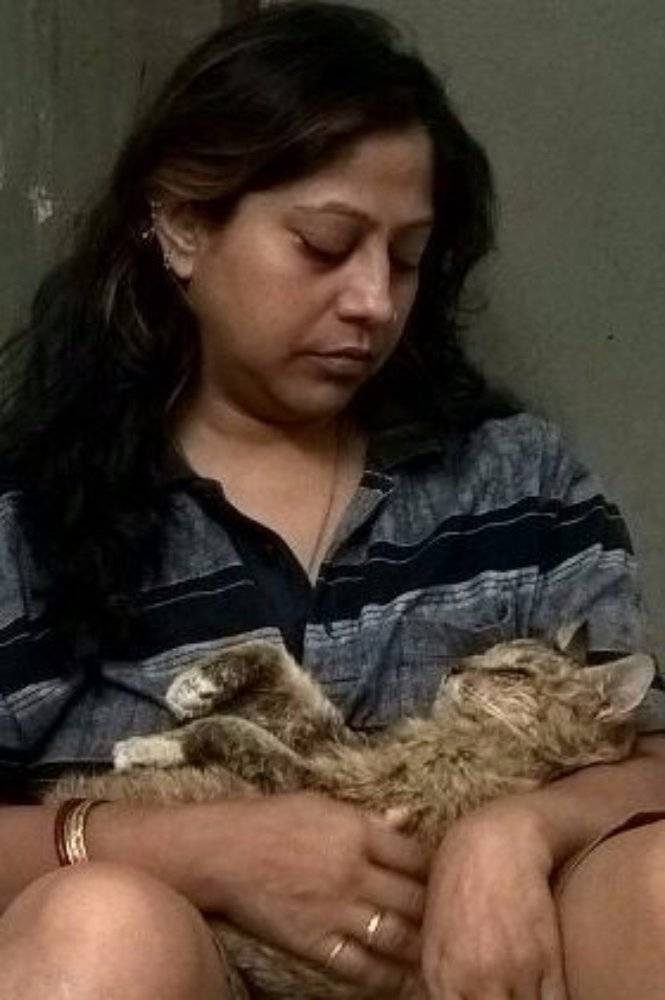 But there was a big problem….!! His leg had started to rot, and he had stopped grooming himself. With a cat it is bad news as cats are obsessive self groomers. He had lost control of bladder and bowels. Old age can be torturous for animals, specifically if they are strays. I took him to vet but his condition only worsened… though only silver lining was  that he would recognize my voice and respond to his name ‘Meaow’, (that I had given him in our 20 days of friendship.) He had placed his full trust in me which was phenomenal, and learnt to ignore my dogs (who in turn had accepted him and had learnt to let him be)… Right from cleaning his wounds, to injections at the vet and having a bath he never objected and let me take care of him. In the mornings he used to rest inside the house and evenings he used to roam my lawn.

Then suddenly he started disappearing and I had to hunt him out for hours only to find him hiding in drains, or resting under bushed hiding away. His voice has become feeble and it was three days since he had eaten anything, not even water. He would go up till the water bowl, make a herculean attempt, and then walk away deciding not to drink.  He had started to waste away. He couldn’t even walk now, and his leg had rotted refusing to heal. And now came the hardest part… euthanizing him….!! He definitely did not deserve to die in a gutter like an unloved and a forgotten stray…! He deserved better. With all the love and trust between us, he deserved to die with dignity of a much loved pet, cuddled in the arms of his humans whom he loved and trusted in his final moments. And that’s what he got. He crossed the rainbow bridge at 6:30 pm, on the Maha-Ashtami day, on 14th April 2016, cuddled safely in my arms, leaving us all in tears. He’s at peace now and lies buried in my garden’s flower bed, where he often used to sit in his last days, as if he had chosen that spot for himself.

If I ever have a cat again, then I want it to be you, so that I could love you more.
Rest in Peace ‘Meaow’.. You deserve it.

Don’t forget out to check Purrfectpawesomefurrytales for more stories.