Every October, black cats are on people’s minds as Hallowe’en approaches. But they’re on my mind ALL year, because I have two of them. They are beautiful, silky, soft, sleek, purrfect fur people. Both are American shorthair cats, both adopted from the same cat orphanage:

Other days and evenings by appointment only.

I named him. I knew I wanted to name our next cat “Phantom”, but had imagined it being because of The Phantom of the Opera. Perhaps we would find a kitten whose black-and-white markings resembled the mask on that fascinating literary character, I thought.

But no – an absolutely perfect, friendly, cuddly black kitten caught our attention. 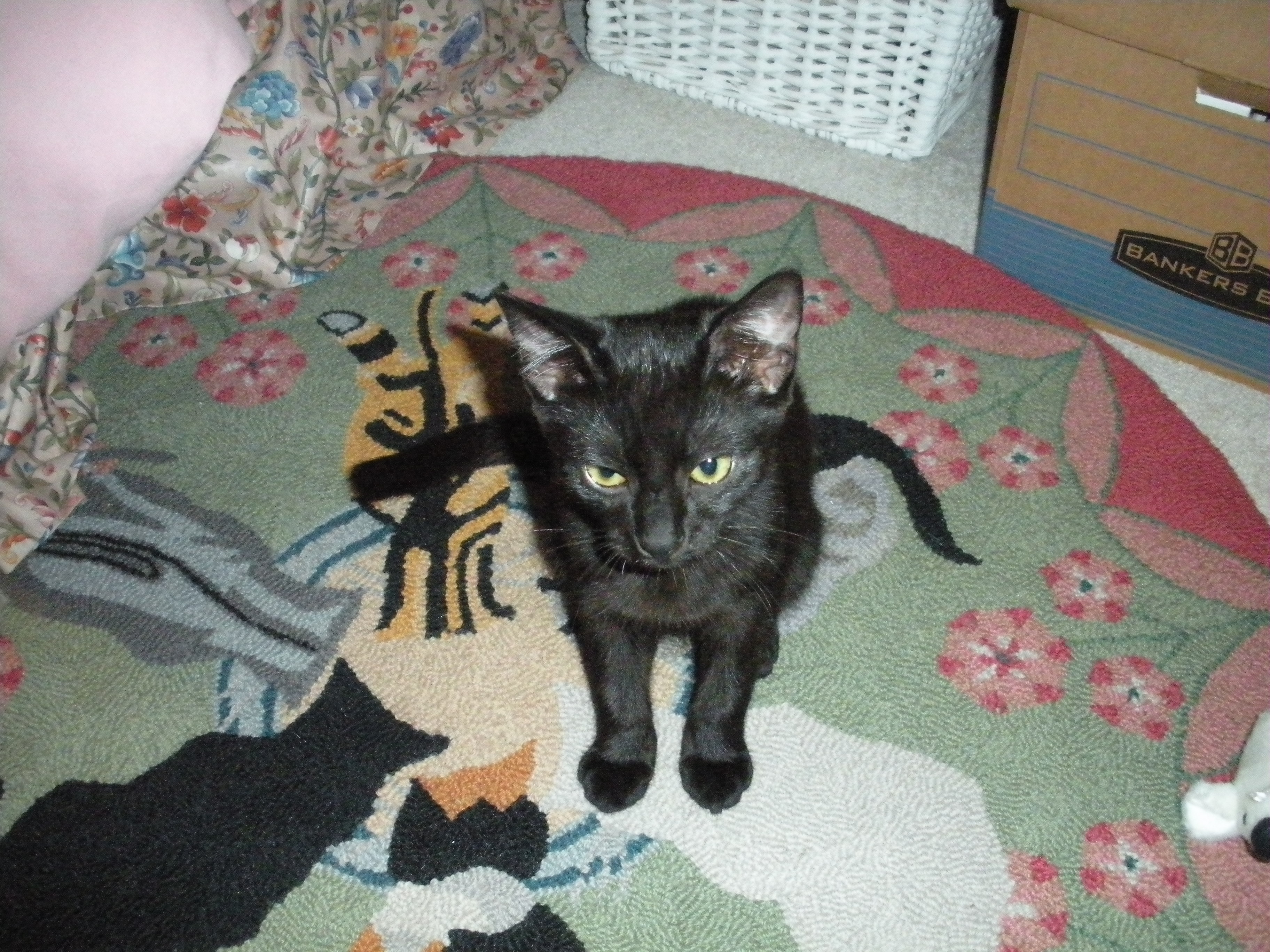 Phantom demanded constant attention as a kitten, and still does. Here he is on the circular cat rug, lobbying me for treats. (Photograph by Stephanie C. Fox)

He was not our first black cat, so we already knew how great they are.

My childhood pet had been another shorthair black male cat, Charcoal.

Both seemed to be part Siamese, with a triangular face, large eyes, and a loud “Mrrrrow!”

Both exhibited the same wonderful personality trait of relaxing into hugs, accepting kisses, allowing us to carry them around and cuddle them, staring at us intently, and often smiling lovely, sweet cat smiles (eyes definitely open, but slitted, as a cat smile is the opposite of a human one).

Charcoal had the added dividend of longevity; he lasted eighteen wonderful years. He was an avid hunter until we moved to our present location, but adjusted to life as an indoor pet…with some growls and yowls of outrage, but that was about it.

Phantom does all sorts of interesting things, and even when he annoys me by throwing books off of the piles around my desk, I still love him. It’s because he spends so much time purring and smiling sweetly at me, and sleeping near me, wherever in the house I happen to be. However, he does scratch furniture, so he wears purple claw-caps. I trim his nails and glue them on. Purple looks good on a black cat, in my opinion…and I don’t like orange or yellow, so purple it is!

Phantom, smiling at me from his favorite spot, the cat perch. (Photograph by Stephanie C. Fox)

Oddly, after 30 years of having a one-cat household, my father announced that he was interviewing kittens.

That meant that he was making trips to the cat orphanage on his own to look for another cat. We couldn’t believe it. But, he wanted a sibling for Phantom, and it had to be a sister. He was sure that there would be no major problems if that sibling were female.

At last, in October of 2014, he insisted on going to get the kitten he had chosen.

She was down the street, on display at the pet store there, due to some mistake, so we rushed over there and met her. The store called POA, and it was agreed that we could have her. We shopped around for some pink dishes, a bed, a crate (my mother was determined to keep her safe from a jealous older brother until she grew to the same size as he was!), and litter supplies.

After a bit more bureaucracy, we were on our way home with the kitten.

As we rode down the highway, my mother and I discussed the kitten’s name, trying to come up with something French. We love almost all things French, and I studied the language in high school and traveled there. After a few miles, I suggested “Cherie” and my mother approved it. “Cherie” means “dear” in French, and with that “e” on the end, it’s feminine.

We got home, set everything up, and soon realized that we had another great black cat.

We soon realized that we had another smiling black cat. (Photograph by Stephanie C. Fox)

Cherie grew up to take her place with our alpha male cat. The only thing that disappoints me is that girl cats don’t cuddle as willingly as boy cats. Cherie pushes! Oh well. She holds her own with Phantom, though, yielding to him just enough on certain points. However, we don’t allow fights to escalate, and they are few enough that they are not a problem. All cats like to get into a little mischief, after all.

In fact, Cherie ended up with an even cooler name after my mother dressed it up:

I treat the cat perch as a first-come, first-served spot, and Phantom and Cherie have come to accept that. There are plenty of places all over the house for them to sleep and watch birds out of windows.

Cherie enjoying a turn for a nap on the cat perch, snuggled up to the Teddy Bear. (Photograph by Stephanie C. Fox)

When she was about a year old, I got a present for Cherie: a pretty black cloth collar with pink roses on it and a pink safety clasp. She seems to feel undressed without it on, which is hilarious. (Phantom has been known to chomp it off of her neck, even though he doesn’t want a collar!) The first thing I did when the collar arrived was to get the letter opener and carefully detach the bell from it. I informed Cherie that, as a cat, she has a right to stealth. Also, I didn’t want to hear a bell jingling with her every move.

Cats can learn to share if they know that they have enough of their own space. Ours have multiple litter boxes, water dishes, food dishes, toys, beds, and other random spots around the house.

In the kitchen is a huge, antique butcher block. Originally, it was meant to hold a fruit basket, but the cats took it over as a vantage point for watching the goings on there. It is also the spot where we feed the cats, with Cherie eating below, and Phantom on top of it. 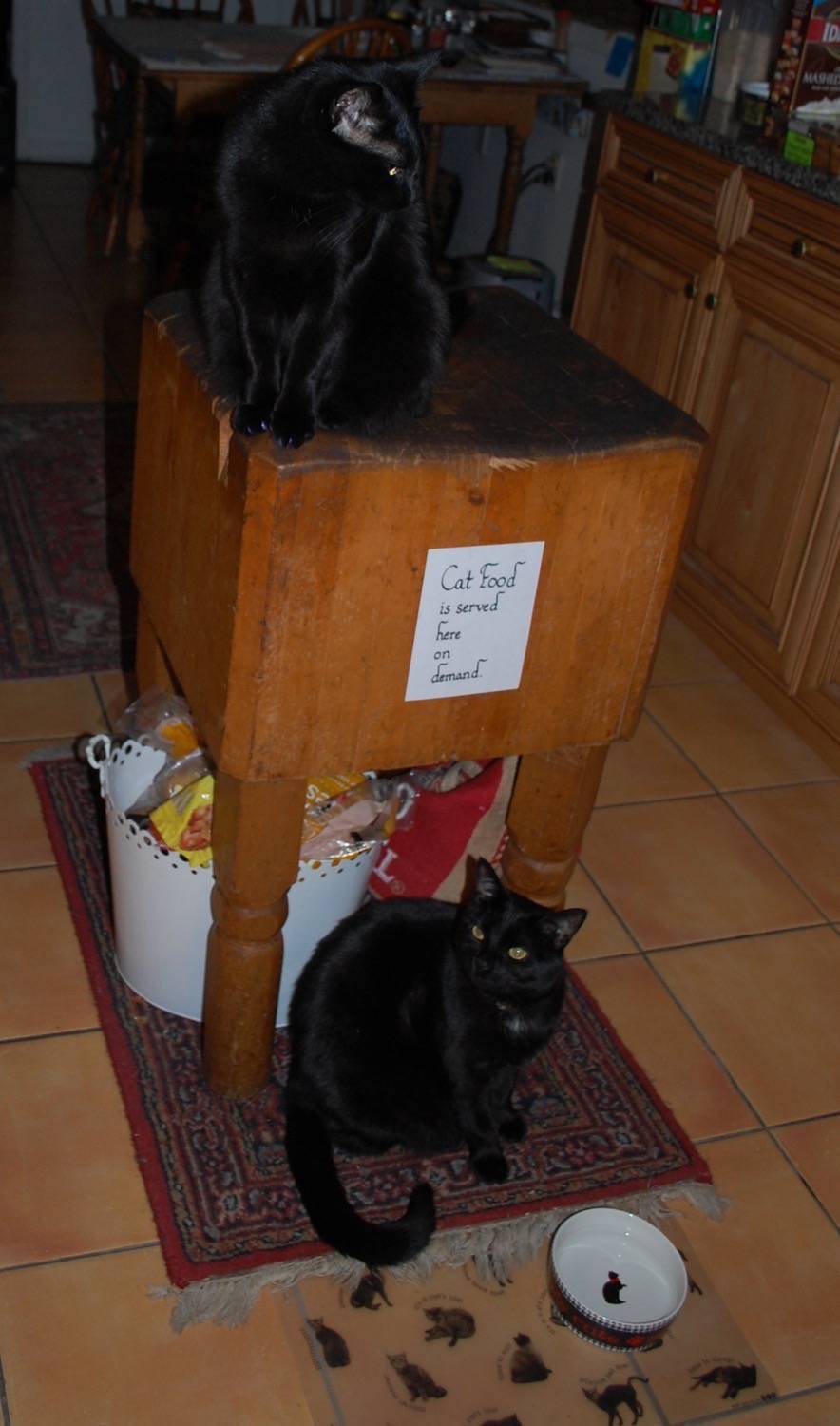 The butcher block/dining area, though it began as Phantom’s throne, must now be shared with his sister, who also likes to get up there when it is not mealtime.

We live in Connecticut, U.S.A., in an area with wild turkeys, coyotes, Great Horned owls, bobcats, foxes, and other wild creatures, including a black bear who likes to roam through our neighborhood, so we never, ever let our cats out. My husband calls them “our children” as we prefer feline to human ones.

Cherie and Phantom in their baskets on the kitchen windowsill. (Photograph by Stephanie C. Fox)

I wonder why more people don’t appreciate black cats and adopt them. There is a black male cat, a year-and-a-half old, at our nearby pet store. He has been there for almost two months. He is beautiful, and he acts just like Charcoal and Phantom. I hope someone takes him home soon.

Black cats are good luck. They are affectionate, highly intelligent, and fascinating.

Ours are safe indoors with us, and we love them.

Stephanie C. Fox, J.D. is a historian, author, and editor. She is a graduate of William Smith College and the University of Connecticut School of Law.

Ms. Fox has written several books on a variety of topics, including the effects of human overpopulation on the environment, Asperger’s, and travel to Kuwait and Hawai`i.

She runs an editing service called QueenBeeEdit, which caters to politicians, scientists, and others. Its website can be found at www.queenbeeedit.com, complete with a blog, her curricululm vitae, a list of her books, a description of her editing service, and some of her Chancery Italic calligraphy samples.

Her areas of interest include – but are not limited to – women’s history, biographies, women’s studies, science fiction, environmental studies and environmental law, international relations, Asperger’s, travel, and cats.