Although technology has brought us many impressive developments that have even taken us to the moon and back, such innovations surely pale in comparison with the latest tech that’s been developed for our furry friends!

So from weird and wonderful iPad games that can keep felines occupied, to even some online slots games featuring moggy motifs to ensure that cat-owners don’t get bored, here’s how our tech is getting a lot furrier in 2016.

The introduction of cat-based software for tablets such as iPads has meant it’s now easier than ever to provide your pet with some of their own video games. The cat food brand Purina have introduced their own cat apps that feature games such as Cat Fishing and Happy Wings. These games simulate the real-life movements of many favoured feline targets – so don’t be surprised if your tablet gets a bashing!

Such is the human obsession with cats that there’s also been a massive range of cat-based video games to keep cat-owners entertained too. The cult game Neko Atsume has definitely cemented Japan’s reputation as one of the most kitty-friendly countries in the world. Some of these feature in this online slots collection, such as Alley Cats, at the Betway site and can be played on your smartphone whilst your cat is busy tapping your tablet!

And when even the cat charity Cat’s Protection unveil their own cat puzzle game for iOS and Android devices, it’s clear that our tech world has gone a little cat crazy. There’s even been the surprising rise of cat celebrities such as Grumpy Cat who has become a massive internet hit thanks to his sour-faced exploits that have made him the star of an array of smartphone apps. 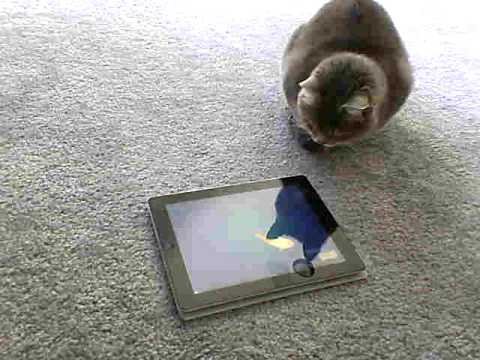 But the rise of cat tech makes sense as an increasing number of our pets are living in urban areas, and as such, many will face the future of being an indoor pet. Thankfully with a bit of imagination and the use of the RSPB bird songs app, you can pique their interest in the outside world without them having to face the troubling concerns of traffic and other neighbourhood cats.

And if you’re looking to help your cat let off steam, then using a laser pen is a fun way to give them something to focus their innate hunting skills on. Just be sure not to shine it into their eyes, and don’t let them chase it for more than one continuous minute as cats can quickly tire themselves out!

So from the latest in iPad games for cats, to cat-based slots games for humans, it’s clear that the tech world has gone more than a little cat-crazy!

36 thoughts on “Top tech to entertain your cat!”