Today’s guest post comes from our friends over at MyFourCats 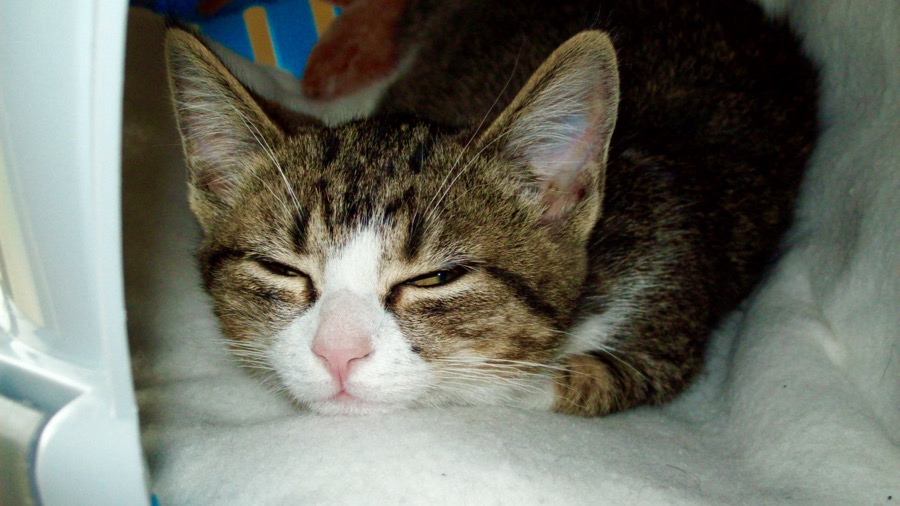 All four of our cats were rescued by the RSPCA in UK. They all have different stories and traumas. Isabel was almost 3 months old by the time we adopted her (in Autumn 2008) so there’s not much we know about her early weeks of life. Sadly, we learned nothing about her from the RSPCA volunteer who was keeping kittens in her makeshift cattery (really a glorified shed) in her back garden. Isabel had no name, as I recall, when we went to see her for the first time. She was in a small cubicle with a chicken wire door with two other siblings. The other kittens had already been put on hold by someone else. Isabel was the only one with no home. She had stunted legs and tail compared to her sisters and she was the runt of the litter (although you wouldn’t know that NOW to look at her

). Other than that we were told she was perfectly healthy. She didn’t meow but she did like to climb! The most vivid memory I have of her from that first meeting is how she climbed all over the chicken wire door and hung upside down and gazed at us! That was it, we wanted her! We went back a week later and took her home. She never meowed. We had a new carrier with soft white wool blanket for her. She was allowed to take her favourite toy, a little brown mouse, with her from the fosterer. That little stuffed toy never left her side for the first six months of her life with us.

When we got her home, she still didn’t meow. She didn’t come out of the carrier. So we put the carrier on the floor of our bedroom and let her be. We thought, let her decide for herself when she wants to explore her new surroundings…she’ll be ok. But almost two weeks went by and except for eating and using her litter box (which she learned to do in one day! Smart girl!) she stayed in her carrier box cuddling her toy and blanket. At this point, we still didn’t have a name. It wasn’t until the third week that she spent a day outside her box. It would be weeks before she stopped sleeping/napping/hiding in it! What happened to her before she was rescued to make her so afraid? We imagined the worst. When she did begin to explore the house, she kept falling over and tripping. Immediately we nicknamed her Boo-Boo. We also called the vet. We had her checked and nothing problematic was discovered so we put her clumsiness down to her slightly stunted legs and tail. I kept looking at her and she seemed to look liked a Belle but she liked the sound of “boo.” Hubby thought her clumsiness was like dizziness so he started calling her Dizzy-Boo (I slapped him for that!

). One of my favourite writers is Isabel Allende and at that time I was re-reading “The House of the Spirits” so I thought: Isabel! Izzy-Boo! So that was that!

It seemed like she knew she finally had a proper name because that day she perked up and spent an entire 24 hours outside her carrier box! She still carried her mouse everywhere with her but that night she slept on our bed and let us cuddle her for the first time! Soon, Isabel was climbing on the stair banisters, running in the garden, chasing her toys, playing, jumping, and started to meow like crazy! Her favourite activity soon became watching the blackbirds that would eat the berries off our firethorn plants in the front garden! One thing was certain: Isabel loved her food! She never had a weight problem though…until I had to rush home to USA when my dad first fell ill in Spring 2009. She did not respond well to my sudden disappearance. When I returned to the UK three weeks later, Isabel was very cross with me and let me know it! She also must have been more stressed than we realised because she soon developed a serious UTI. The vet put her on a special dietary food that, in a few weeks, cleared up the infection but had the unfortunate side effect of causing weight retention. 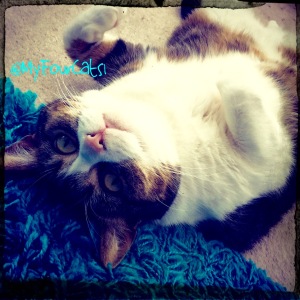 Isabel has never lost the extra weight, despite my measuring her food intake ever since. But you know what? She’s happy now and that’s all that matters. Isabel is the loudest, most talkative cat I have ever met! She talks to me all day! If I look at her and ask her a question, she answers! Do you want food? MEOW MEOW MEEEOOOOOWWW!!Isabel is her own cat, although she gets along with the other three just fine, she likes her space. I mean, hey, she was the first cat so she’s got certain rights! And, she’s tough, even Tristan doesn’t push his luck with her! I still wonder, though, what happened to Isabel before she was rescued. It’s little things: such as she hates men. Any strange man that comes into the house, she hisses & spits like crazy, but not at women. Even hubby gets hissed at occasionally and we just can’t figure it out except that maybe she was abused by a man before she was rescued? She doesn’t like her head touched…ever. I try not to think about why or what happened to her in the first weeks of her life on the street. 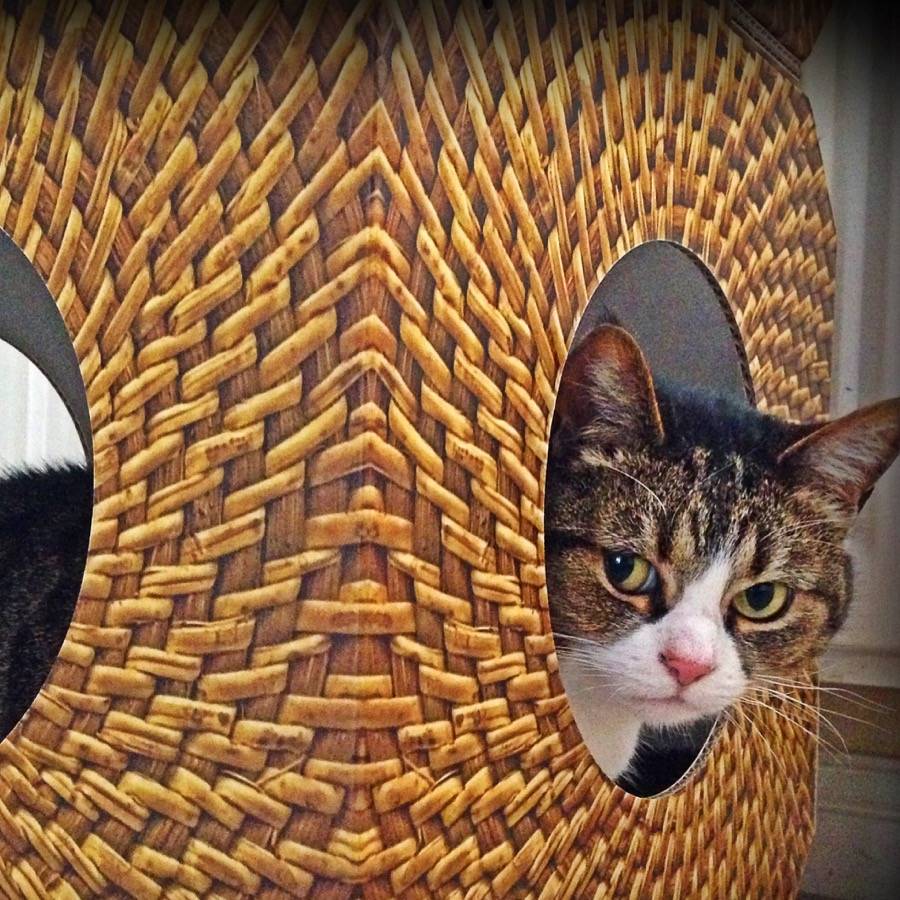 She’s still clumsy but she’s very clever. She knows exactly how to get what she wants from mom…but don’t they all?

Thank you for reading their story which was originally posted here and don’t forget to email us if you’d like to have your own story featured.

31 thoughts on “Guest Star: Isabel – The cat with no name”