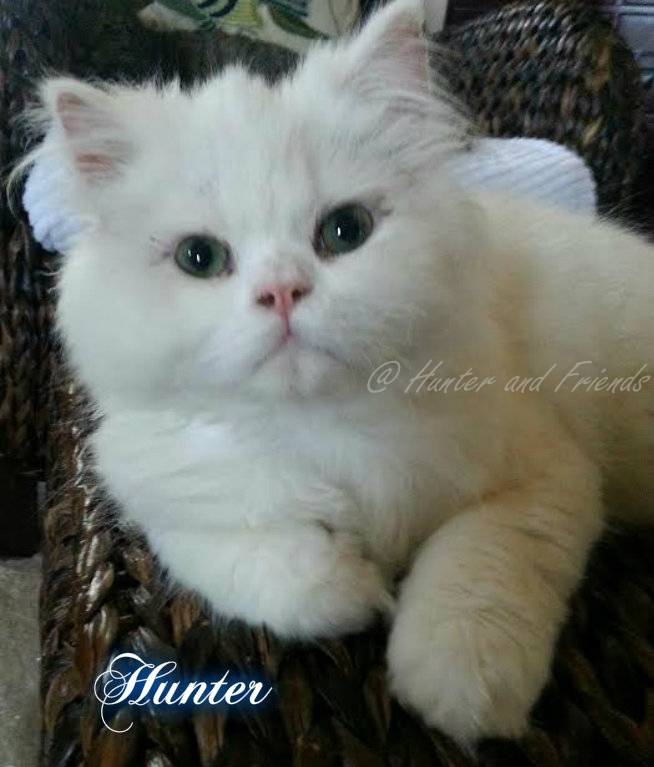 Hunter is a rescued, purebred, original breed of the Persian cat, commonly known as the doll-faced Persian.

He’s also a special needs kitty because he only has 3 legs and lives with the threat of hypertrophic cardiomyopathy. Yes, he’s a little tri-pod kitty, but it doesn’t get him down. He’s happy-go-lucky and loves everybody. There’s a lot of normal kitty things he can’t do despite his best efforts, but he makes up for it with his sweet temperament, cuteness and purrs. 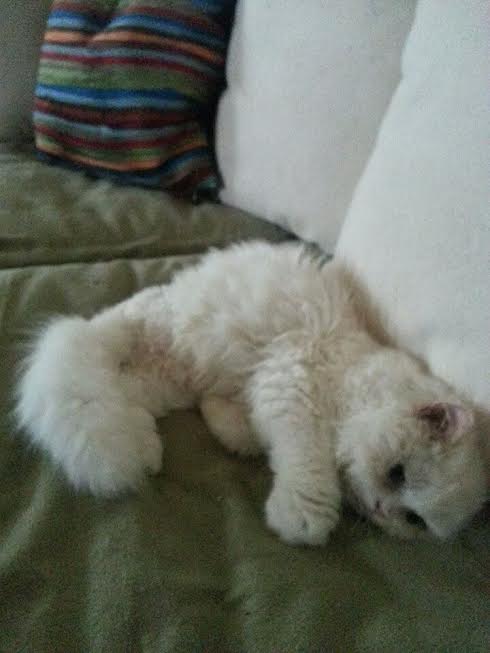 He was pulled from a bad backyard breeder who bred him with an HCM positive stud and ignored his painful, twisted and dragging rear leg when he was born. This unreputable and irresponsible on-line Bengal rescue in south Florida pulled him when he was 4 months old & had his leg amputated by a spay/neuter clinic, used him to plea for donations that went to pay her personal lifestyle bills, and housed him with a lot of sick exotic cats in outdoor, dirty cages, before he found his furever home in Michigan. 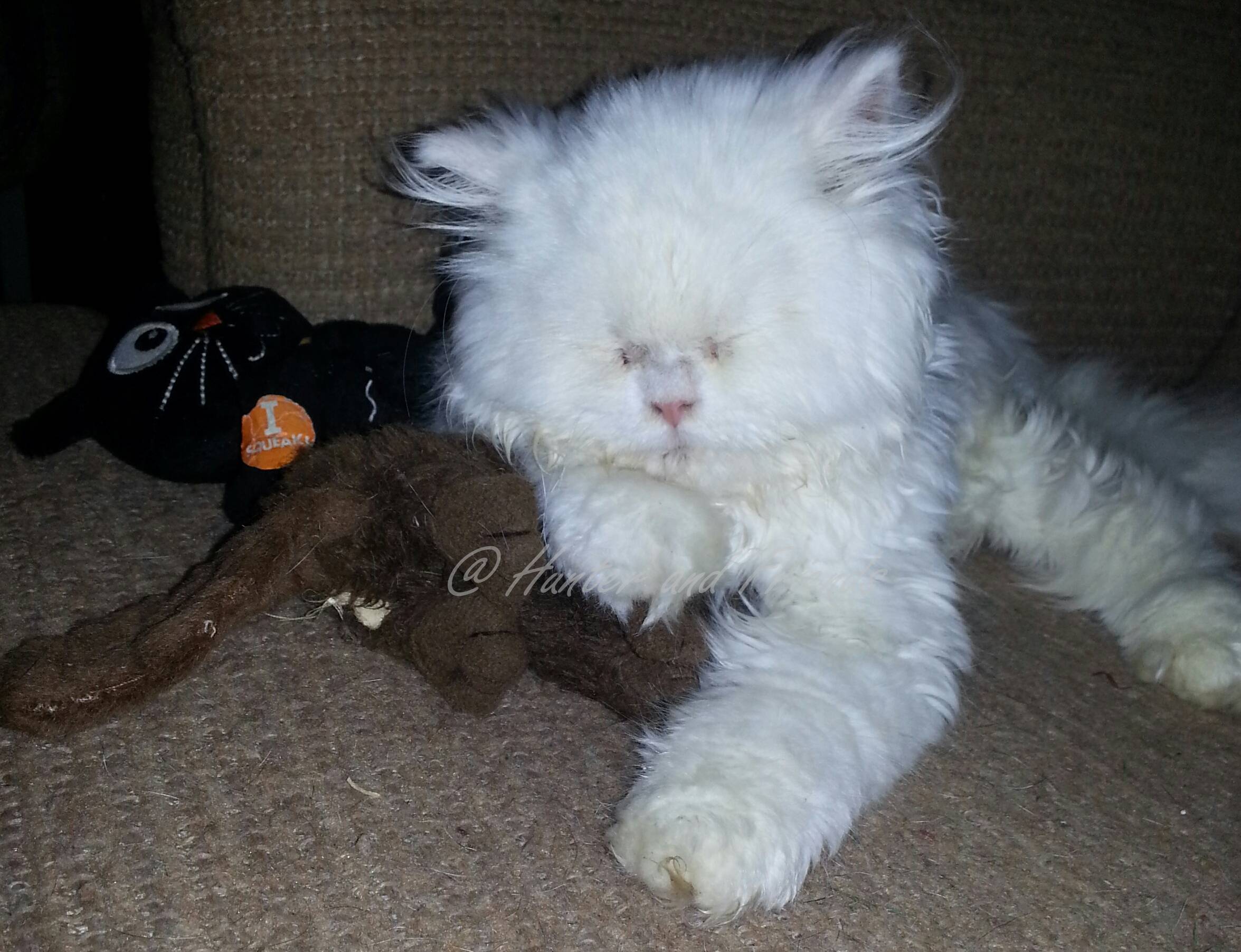 He was in awful shape when his new Mom flew to the West Palm Beach, Florida airport to bring him home. His coat was horribly matted and neglected, he had fleas, ear mites, ringworm, conjunctivitis and intestinal parasites. Two days after he got “home” he developed a 105* fever & tests showed he’d contracted Pan Leuk from the sick cats at the rescue (some of those cats subsequently died). He was only 5 months old then. Today, he’s 20 months old, healthy, and adjusting to his limitations as a tri-pod kitty.

His humans had him screened for HCM and he remains negative for the deadly disease. Recently, it was discovered his remaining rear leg was also painful and beginning to twist. An x-ray revealed he has Osgood-Schlatter’s disease, a condition where the tendon in the leg connecting the bones is not sheathed or attached, causing weakness and instability of the knee and bones. It is expected that, as he matures and grows, the condition will correct itself, as it does in humans. The vet and his humans suspect that was also the problem in his amputated leg and had he been treated properly by the irresponsible rescue he may be living normally today.

Hunter has a really nice home, a loving and spoiling Mom & Daddy, 3 doggie siblings and 5 other kitty siblings now. He also has a Facebook page called HUNTER AND FRIENDS with over 14,000 fans in just 4 months. We hope you’ll stop by there and put a paw on his “like” button. There’s great feline information about care, health, environment, rescues, some funny memes and of course, pictures and videos of Hunter & his four-legged roomies – the Friends part of Hunter and Friends. 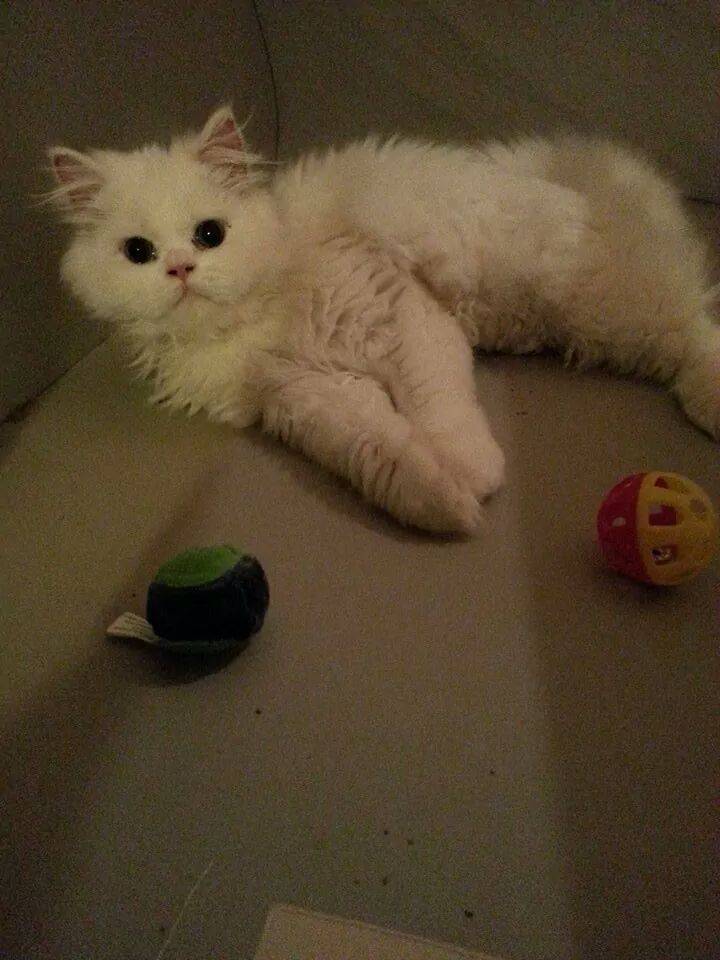 Follow the adventures of Hunter, the amputee rescue kitty that captured the hearts of animal lovers everywhere at:

Thanks for reading and don’t forget if you’d like to be our next guest star here at Katzenworld to drop us an email @ info@katzenworld.co.uk